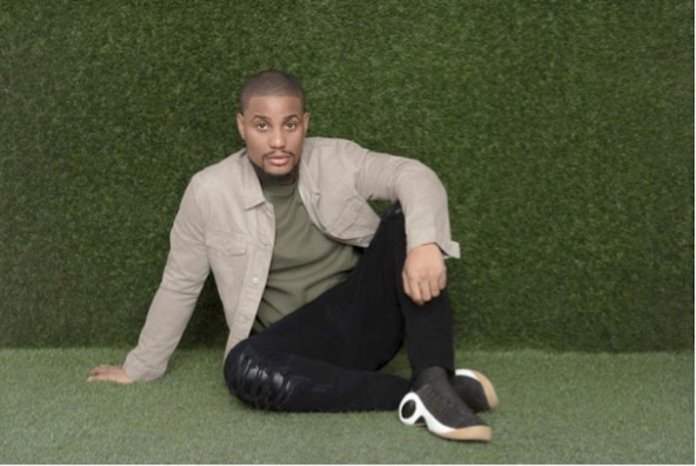 Armed with good looks and a good sense of humour, actor and model, Alexx Ekubo is the ideal Nollywood sweetheart. But what makes him tick is the many layers of his personality and unwavering passion for a better Nigeria. Vanessa Obioha writes

You may be forgiven if you label Alexx Ekubo an actor, model, rapper, motivational speaker or a ‘chop life gang’ member, but never call him a comedian. He emphatically denied that title.
“No! Not at all,” he argues.

It is not unexpected that people will easily tag the 34-year-old actor a comedian. With Ekubo, it is hard to hold one’s stitches. Almost every statement is accompanied by a funny remark. Our conversation was punctuated with guffaws and amusing remarks as if we were very familiar with each other.

On Instagram and TikTok, he is the king of comedy. His timeline is filled with funny skits of him in his beautiful abode, having witty arguments with the popular Ikedi, or getting on the nerves of his Chop Life Gang members, Yomi Casual and IK Ogbonna or reenacting movie scenes.

His ability to keep his thousands of fans entertained without donning the toga of comedy makes him exceptional. It’s like a second skin to him. On several occasions, he’s been told to pursue a career in stand-up comedy.
“No oh, not me,” he tells his friends. It is not his calling.
“These days when I get roles, they literally give me slapstick comedy roles and I always tell them that I’m not a comedic actor. I’m an actor with comedic timing”

He explains further: There’s a difference. I don’t go around trying to make people laugh but I know when to apply my high sense of humour that people can find amusing or funny.”
One such occasions was when he received a Screen Nation Film and Television Award in London as the Fastest Emerging African Screen Talent a few years ago. The Kenyan-Mexican actress Lupita Nyong’ O clinched the award in the female category.

On getting to stage to give his acceptance speech, Ekubo told the packed hall, full of Africans from different parts of the world that he dedicated the award to the Supreme One, family and to his wives on Instagram.
“The hall erupted in laughter,” he says.
By the time he returned to Nigeria, his speech had gone viral. His female fans easily called themselves his wife on Twitter or Instagram, depending on which social media they find him.

However, a group of female fans decided to make it official by forming Alexx Ekubo Wives Association.
“When I first saw it, I was curious. They told me they have been trying to reach me for a while but to no avail.”
The group’s Instagram page is adorned with everything Alexx Ekubo as well as pictures of prospective wives. On one of their posts, they surprised the actor with birthday presents.

“I really love them and they are one of my strongest support structures. It’s amazing to have a group of people dedicate their time to you, supporting you in every way particularly in a journey where nothing is certain.”

Armed with good looks, Ekubo is the ideal Nollywood sweetheart. Acting has always been in his DNA but he opted to study Law instead in university. However, it was while contemplating if he should go to Law School or not that he discovered his true calling. He started out playing minor roles in movies before gaining recognition as a model in 2010 when he became the first runner-up at Mr. Nigeria beauty contest. After that contest, he began to feature more prominently in movies. His recent movies include the EbonyLife production ‘Your Excellency’, Bolanle Austen-Peters ‘Bling Lagosians’ and ‘Trapped in Between 2’.

He is also part of the cast that will feature in the upcoming futuristic film ‘Area Dogs’ by ‘Gbomo Gbomo Express’ director Walter ‘WaltBanger’ Taylaur. He is particularly excited about the movie.
“I’m very proud to be part of the movie because it is a futuristic sci-fi movie, a genre that is uncommon in our clime. Most Nollywood movies are either drama or comedy. We don’t really explore other genres of filmmaking because they are expensive. But I’m happy that Nevada Bridge, an out of Africa movie streaming platform for Nollywood and African content is changing that narrative with the production of ‘Area Dogs’.

It’s a big cinema project that we are planning for 2021. It’s set in 2041 and knowing WaltBanger as a phenomenal director, you can bet the movie is going to be a hit.”
For Ekubo who hails from the historical town Arochukwu in Abia state, Nollywood’s excellence boils down to budget. He believes with the right budget, that Nollywood films can rub shoulders with Hollywood.

“We already have amazing talents, content and fantastic producers and directors, but we don’t have the budget. With a budget, we can do anything. An average Hollywood blockbuster is shot with $15 million. To put that in perspective, about 2.5 million of that is N1 billion. They have the budget to do anything: to blow off an airplane, shut down an entire city and build their own village. We don’t have that budget in Nollywood.

“So, once we get the budget, everything can be done. We already have filmmakers who are cross-pollinating so we know it can be done with a budget as little as $5 million. I know a handful of filmmakers who can make a fantastic movie that will rival the ‘Avengers’ or any Hollywood blockbuster if they are given $10 million.”
With the pandemic, Ekubo foresees productions becoming pricey because of the health measures put in place to ensure the safety of everyone. He also takes seriously COVID-19 safety measures.

“People are always holding the wrong people accountable for bad things, especially in Nigeria. It is only in Nigeria you see the entertainment industry being seen as the moral standard or the watchdog of our society.

“It is not our job. Whenever there is an uproar on a social or national issue, people easily accuse celebrities of not doing enough. Why would you hold us responsible for the rot in the country? Why don’t you call out your governor, senator in your senatorial district, your House of Reps member, or even the president? These are the people who need to be held accountable.”
He continues, his voice assuming a higher pitch, “But when we do our bit, we are also criticised.”

The way Ekubo sees it, youths are not active when it comes to national issues. They rather turn a blind eye than demand action. He urged them to wake up and start speaking out because they are playing with their future by keeping silent or acting nonchalant.
An avid traveller, the actor who calls himself a method actor wears his Nigerian heritage like a badge of honour. He patronises local designers such as Yomi Casual, 313Eko, and loves artworks by local artists. The walls of his lavish apartment are donned with artworks mainly by the artist Atinuke Badmus. He is proud that the commercial city of Aba is getting the spotlight thanks to his state governor Okezie Ikpeazu who promoted the slogan ‘Made in Aba’. He only wished that the momentum was maintained.

“These designers are making quality clothes and footwear. Until we start supporting them, we can’t really get the Nigeria we want. Hollywood is where they are because of the support they get from the people not from the government. If one percent of the population supports our local designers today, imagine the impact,” he points out.

Born in Port Harcourt, Rivers State and schooled in Katsina State, the actor revealed that he is into real estate. Like an industrious Igbo man, he is exploring other sources of income because “I don’t want to end up begging on Instagram.”
Much of his success he attributes to God, little wonder he now includes an extra ‘x’ in his name.
“The other ‘x’ represents extra-large God. I have a religious background. My mother is an evangelist and my father is an elder in the church. As a young boy, I joined the choir. I will really feel bad if I die in sin because I come from a religious background. God is everything to me,” he says.