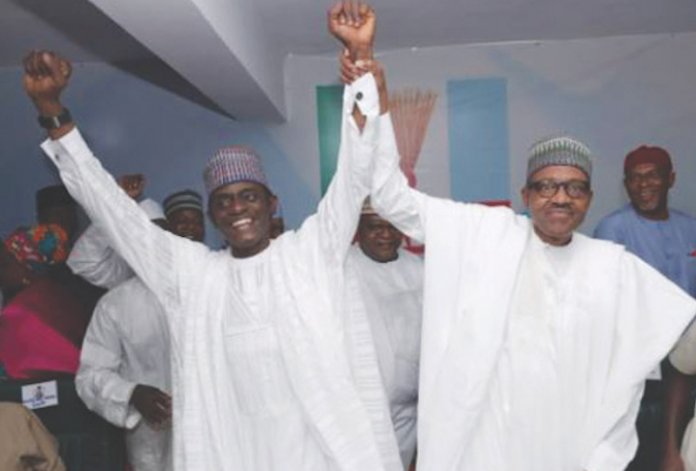 The various contending forces in the All Progressives Congress are beginning to retool ahead of a renewed battle for the soul of the party, writes Chuks Okocha

With the reconciliation between the Minister of Transportation, Chibuike Amaechi and his colleague in the Petroleum Minister, Timipre Slyva, the supremacy battle of who becomes the leader of the All Progressives Congress (APC) in the South-south region is now a three-man affair.
This is because the Minister of Niger Delta, Godswill Akpabio, is also interested in who controls the regional structures of the party.

Interestingly, one thing is common to the three of them: they are all former governors and currently in control of first class federal ministries, with huge financial pedigrees or war chest as some are wont to call it.
But, the battle may be put in abeyance if on September 19 the sacked national chairman of APC, Adams Oshiomhole, is able to install Pastor Osagie Ize-iyamu as the next governor of Edo state. That also explains why Oshiomhole sees the governorship election in the state as a do-or-die affair.

It is a do-or-die affair, because if Godwin Obaseki is re-elected for another four years, it could spell doom for the political career of the Iyahmo-born labour-leader-turned politician.
Though the Director General of the APC Progressives Governors’ Forum, Dr. Salihu Lukman, had leaked plots to reinstate Oshiomhole as the national chairman of the APC whenever there is a national convention, there’s been a consistent denial by Oshiomhole. Yet, there are elements of truth in the allegation as plots are still in the incubator.

The grand plan by his supporters is that, if eventually, the September 19 is in favour of the APC, then, there would be a fresh reinvigoration to see Oshiomhole back as the national chairman. But, if not, Oshiomhole may be finished politically.
He would forever be blamed for the basic reason the APC lost the governorship election. This, therefore, explains why he is taking it as a do-or-die affair. Many people usually ask whether he was the person contesting or Ize-Iyamu as the pastor has indeed been sidelined.

However, if the APC is victorious at the end of the day, his supporters will launch a fresh campaign that he was unfairly treated and that he should be returned as the national chairman. When this becomes the case, then the struggle for the soul of the APC in the South would be tough particularly, in the South-south it would become foursome: Oshiomhole, Amaechi Akpabio and Slyva.
Also, as part of plots to ensure that Oshiomhole returns, some chieftains of the APC are already waiting to commence court processes to challenge his removal from office as the national chairman, citing that due processes were not followed. All these calculations are part of the 2023 permutations within the APC and this explains why the national conventional might not take place as earlier proposed.

If this succeeds, then, it would give more advantages to the presidential ambition to the former Lagos State governor, Bola Tinubu. Oshiomhole and Tinubu are seemingly inseparable political allies for 2023.
When this scenario plays out, the likes of Amaechi, Akpabio and Sylva will eventually take the back seat. As, there won’t be two captains in a ship. Oshiomhole as the national chairman would definitely call the shots in the South-south zone for the 2023 political calculations.
What this means is the perceived presidential ambitions of Amaechi and the Ekiti State Governor, Dr. Kayode Fayemi would be in limbo.

But, if the PDP eventually wins and Obaseki returns to the Osadebe House, the battle for the control of the zone would bring out the political sagacity of Amaechi, Slyva and Akpabio. It might be in the interest of Amaechi and Fayemi that Obaseki wins the Edo governorship election, as it would tame the ‘monster’ in Oshiomhole.
In 2014, it was the attempt by Amaechi, who was the APC overlord supervising Bayelsa, Akwa Ibom and Edo to take over the Bayelsa State APC that led to the faceoff between him and the oil minister.

Thus, in Amaechi’s camp, the last may not have been heard of Victor Giadam as according to those who should know, he still has an ace up his sleeve. Besides, all the camps have directed their allies to head to court as a last minute’s efforts to ensure that they were not schemed out in the power equation for 2023.
But despite the appeal by the party and the National Executive Committee (NEC) to all aggrieved members to withdraw their cases from the courts, some members of the party in some states have filed suits against the party at different courts, seeking the sack of the caretaker committee.

There are pending appeals at the Abuja Division of the Court of Appeal fixed for hearing in the appeal brought by members of the party in Rivers State loyal to Amaechi.
There is this APC member, Chief Lateef Arigbaruwo, in the suit number FHC/L/CS/789/2020, faulting the NEC meeting of the party held on June 25 that eventually led to the sack of Victor Giadom and Oshiomhole.
The suit has the APC, Mr. Victor Giadom, NEC and the Independent National Electoral Commission (INEC) as first to fourth respondents respectively.

Arigbaruwo, who claims to be a chieftain of the APC in Ojo Local Government Area in Lagos State, is asking the court to declare whether having regards to Article 25, paragraph B (i) and (ii) of the Constitution of the party, the 24 hours’ notice given by the 2nd defendant for the NEC meeting held on June 25 was valid and legal.
The suit filed on July 1 on behalf of the plaintiff by Mr. Dimien Edonkumoh, is seeking “an order of the court setting aside all the decisions taken at the NEC meeting, which he declared illegal on the grounds that it was conveyed in the June 24 and held on June 25, contrary to Article 25 of the APC Constitution.”

The plaintiff asked the court to restrain the caretaker committee members from parading themselves as such. He wants the court to grant an order allowing the APC National Vice Chairman (South-south), Mr. Hilliard Eta, to pilot the affairs of the APC as acting national chairman and preside at all meetings of the National Working Committee and NEC.
This is interesting because the sacked Chairman of the party’s Caretaker Committee, Mr. Isaac Ogbobula, who is a loyalist of Amaechi, had approached the Court of Appeal to challenge the judgment of the Rivers State High Court that sacked his committee and affirmed Aguma as the acting chairman of the APC in the state.

Aguma, APC and former National Chairman of the APC, Oshiomhole, are the first, second and third respondents.
Justice George Omereji of a Rivers State High Court had on June 9 declared Aguma the acting chairman of the party in the state. The court also compelled the party to allow all its members loyal to Senator Magnus Abe to participate in the new congresses. The court voided the caretaker committee appointed by the now-dissolved NWC of the party in 2018.

This could explain why the chairman of the APC Caretaker Committee, Governor Mala Buni had to warn members still in court to withdraw their cases or be expelled within two weeks. The caretaker committee has already written two different letters asking state chapters to ensure compliance in the withdrawal of all pending cases in the court.

In the latest letter, Secretary to the Caretaker Committee, Senator John Akpanudoedehe, wrote a letter dated August 14 titled, ‘Request for documentary evidence of compliance/non-compliance’, which he personally signed.
Part of the letter stated thus: “In Further to our letter dated July 1, 2020, wherein we directed that you coordinate with your state legal advisers and secretaries to encourage all members, who have instituted any matter in court against the party to withdraw the same and steps to be taken towards reconciliation.

“It is however with dismay that several state chapters have not yet sent their reports in line with our earlier request. In view of the above, you are hereby directed to forward to the National Secretariat, within 14 days of the receipt of this letter, the following: list of all litigation between party members in your state chapter.

“Also, to be submitted to the party secretariat are the documentary evidence of compliance with the National Executive Committee directive on withdrawal of all pending litigation and names of litigants, who have refused to withdraw from the court any matter, which may have been filed against the party in your state.”