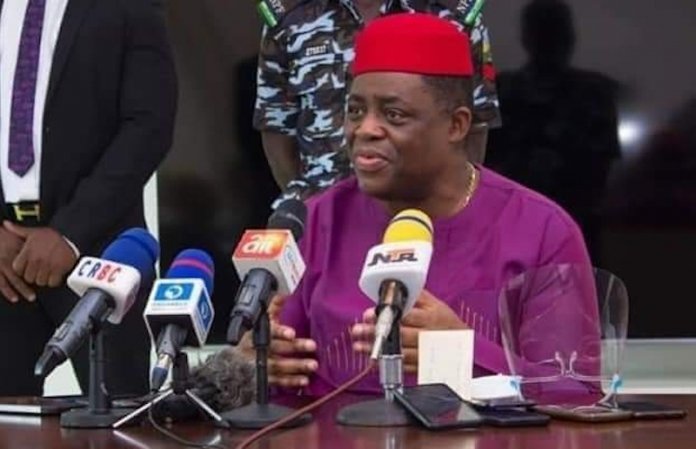 Media Trust Limited, publishers of Daily Trust and other titles, have condemned a reported verbal attack on a Daily Trust Reporter, Eyo Charles by a former Minister of Aviation, Chief Femi Fani-Kayode, during the former minister’s roundtable with invited journalists in Calabar, Cross River State capital, on Thursday, August 20.

But giving his account of the incident yesterday, Fani-Kayode accused the reporter of being sponsored by his political enemies to embarrass him.

The former minister was in the state to visit projects executed by Governor Ben Ayade.

In his account of the incident, the reporter said that his question that angered the former minister is: “Sir, please you did not disclose to us who is bankrolling you…..”

According to him, the former minister did not allow him to conclude the question when he threw caution to the wind and shouted at him, bringing the press conference to an abrupt end.

“He then rained terrible abuses on me, calling me unprintable names; that I was sponsored to come and ask and insult him. ‘How dare you ask me such a very stupid question? I know that you, a hungry-looking, brown-envelop journalist; you are sponsored to ask me such insulting question. You can look into my eyes and ask me such demeaning question! I cannot take that!

‘I am a very rich lawyer, who has been in government; who has been detained many times by governments. I have a very rich background. How can you ask who is bankrolling my tours of the states. It is very insulting, and I cannot take that. You are very stupid. I know your publishers; I will call them in next few minutes. You have to be fired. I cannot answer any more questions from you or from any other reporter. This conference has ended. I have very short temper…..,” the reporter quoted the minister as saying.

The reporter added that it took the intervention and pleas from Chief Press Secretary to Governor Ayade, Mr. Christian Ita and other journalists before the ex-minister would leave him, with a threat: “You can go ahead and write your rubbish. I have marked you”.

But giving his account of the incident yesterday, Fani-Kayode accused the reporter of being sponsored by his political enemies to embarrass him.

“I have always had respect for journalists and I always will. Those of them that know me or have worked with or for me over the last 30 years can attest to that.

“However, there is a distinction between asking a question and offering a gratuitous insult.

“This is all the more so when it is clear that the assertion was sponsored and engineered by my political enemies who wanted to use the young man to insult and embarrass me and question my integrity. Well they got more than they bargained for.

“I repeat; this was not a question but an assertion and an insult and I will not accept that from any man born of woman,” the former minister explained.

The former minister argued that if the insulting assertion by the reporter were made before President Donald Trump or former President Olusegun Obasanjo, he knew how they would have reacted.

However, Media Trust Limited, in a statement issued by its Executive Director/Editor-in-Chief, Naziru Mikailu Abubakar insisted that

Daily Trust reporters are responsible professionals, who uphold the tenets of journalism, as well as best practices.

“That Fani-Kayode attacks a reporter doing his job, is an indication of the chilling disregard he has towards the media, and its work in investigating and reporting on issues. As always, we stand in solidarity with our reporters, and will continue to fight for the rights of all journalists. After all, journalism is part of the bedrock of democracy; therefore practitioners must not be intimidated or threatened as they carry out their work.

“We urge the Nigeria Police to take note, that if anything happens to Charles, Daily Trust will hold Fani-Kayode responsible, especially due to the intensity of the verbal threats he issued during the shocking incident,” said the newspaper.

Also in a statement issued by its Communications Officer, Olutoyin Ayoade, IPC said it viewed the attack as repulsive and unacceptable, since there was nothing wrong with the journalist wanting to know if the tour was an independent initiative or a sponsored one.

“The former minister had the option of not answering the question and the abuses were totally out of place in the context of the event”, the Executive Director of IPC, Mr. Lanre Arogundade, said.

IPC asked the former minister to apologise to the Journalist and give an assurance of his safety in view of the alleged further threats.

The NUJ, through its President, Chief Chris Isiguzo also accused Fani-Kayode of assaulting the journalist and threatening him for daring to ask a question.

“By denigrating the journalist, Fani-Kayode has exposed himself the more as an intolerant and unstable person who will not want his activities closely scrutinised by the media,” Isiguzo explained.

SERAP and the Convener of #RevolutionNow, Mr. Omoyele Sowore have also berated the former minster for verbally attacking the journalist