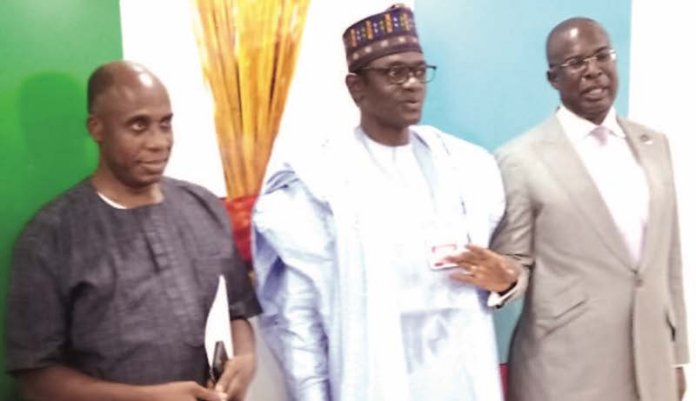 As part of the efforts to reposition the All Progressives Congress (APC) in the South-south, the Caretaker/Extra-Ordinary National Convention Planning Committee Chairman, Governor Mai Mala Buni, yesterday reconciled the Minister of Transportation, Hon. Rotimi Amaechi, and the Minister of State for Petroleum Resources, Mr. Timipre Sylva.

Buni, also the governor of Yobe State, brokered a truce between the two leaders of the party at a meeting in Abuja as part of the ongoing efforts to reconcile aggrieved members.
The reconciliation came the same day Justice Taiwo Taiwo of the Abuja Division of the Federal High Court ordered substituted service of court processes in a suit challenging the dissolution of the National Working Committee (NWC) of the APC.

The ruling party has, however, petitioned Justice Taiwo to recuse himself from hearing another suit seeking the disqualification of its governorship candidate in Edo State, Pastor Osagie Ize-Iyamu, and his running mate, Mr. Audu Ganiyu.

It protested the judge’s decision to give accelerated hearing in the suit to stop Ize-Iyamu from taking part in the September 19 governorship election in the state.
Amaechi had earlier arrived at the party secretariat, venue of the reconciliation meeting, about 1:15 pm, but later left after a few minutes.

He later returned with Buni and Sylva about 2 pm for the closed-door meeting that lasted almost an hour.
It was learnt that Sylva and Amaechi, who are former governors of Bayelsa and Rivers States respectively, finally agreed to work together to reposition the APC in the South-south.

“We have agreed that both of us will work together,” Amaechi, in company with Sylva, told journalists after the peace parley.
Also, in a statement issued by the Deputy National Publicity Secretary of the party, Mr. Yekini Nabena, the ruling party said both Amaechi and Sylva had agreed to work together to reposition the ruling party in the South-South.

The statement said Buni charged the duo to play leading roles in bringing together party members and stakeholders to ensure that the APC is victorious in the forthcoming governorship elections in Edo and Ondo States, as well as legislative by-elections in Bayelsa and Cross River States.

Justice Taiwo yesterday ordered substituted service of court processes in a suit challenging the dissolution of the NWC of the APC.
The judge ordered that the summons for Buni be pasted on the entrance of the party’s national secretariat in Abuja.

The order followed the complaint by a plaintiff in the matter, Mr. Kalu Kalu, that the respondents have been evading service of court summons since they got wind of the suit.

In a short ruling after an ex-parte motion was argued by the plaintiff on behalf of himself, Justice Taiwo ordered that the originating summons and other processes in the matter be served on the 3rd to 14th defendants by posting same on the entrance gate of the APC headquarters in Abuja, since the party is the second defendant in the matter.

The judge further ordered the service when effected by the court bailiff shall be deemed good and proper service.
He accordingly adjourned to September 4 for hearing.
Kalu, a youth leader of the APC in Abia State, is challenging the powers of the National Executive Council (NEC) to sack the national leaders barely two years out of their constitutionally-guaranteed four-year term of office.
In the suit with number: FHC/ABJ/ CS/736/2020, the plaintiff asked for an order of the Federal High Court setting aside the dissolution of the NWC by APC’s NEC meeting held at the presidential villa.

The APC has petitioned Justice Taiwo over his decision to give accelerated hearing in a suit seeking the disqualification of Ize-Iyamu.
Two chieftains of the APC, Hon. Momoh Abdul-Razak and Hon. Zibiri Muhizu, had sued the candidate and his running mate over alleged perjury.

The plaintiffs asked the court to disqualify Ganiyu from participating in the forthcoming election because he allegedly gave false information to the Independent National Electoral Commission (INEC) in aid of his qualification for the governorship poll.
The plaintiffs in the suit filed on July 10, 2020, by their lawyer, Mr. Friday Nwosu, also accused Ganiyu of certificate forgery.

The court, at its last sitting, while delivering a ruling in an ex-parte motion, had ordered that court processes and hearing notice be pasted on the entrance of Ize-Iyamu and Ganiyu in Benin City.
The court also adjourned till yesterday for hearing in the substantive suit.

However, when the matter came up yesterday, Ize-Iyamu’s lawyer, Mr. Roland Otaru (SAN), and that of APC, Dr. Ehiogie West-Idahosa, drew the attention of the court to the petition filed against the judge asking him to suspend proceedings pending the time the chief judge will give directive on the petition.

In the petition dated August 20, 2020, and signed by the Secretary of the Caretaker Committee, Senator John Udouedehe, the party accused Justice Taiwo of moving faster in the hearing of the suit by granting abridgment of time to plaintiffs in the matter when a motion for the same had not been moved.
APC alleged that from its findings, Justice Taiwo has a close relationship with Rivers State Governor, Mr. Nyesom Wike, who is the Chairman of the Peoples Democratic Party (PDP) Campaign Council in the Edo State gubernatorial poll.

The party alleged that Wike had openly boasted to ensure that PDP wins the poll by influencing the disqualification of Ize-Iyamu.
The party alleged that on August 10, Justice Taiwo abridged the time allowed by law for the defendants to respond to an issue even when they (defendants) have not been served with the originating summons. He was also accused of fixing the matter for yesterday when motion on notice for abridgment of time had not been moved by plaintiffs.

“That even when the court granted ex-parte order for substituted service of the processes in suit number FHC/ABJ/CS/839/2020, the story all over Edo is that the APC’s candidate Pastor Ize-Iyamu has been disqualified by Justice Taiwo Taiwo.

“That the APC is worried that they have no chance of getting justice before Justice Taiwo Taiwo on account of his affinity to Governor Wike and the anxiety demonstrated by abridging the time for defendants to file processes, when the motion to do so, was still pending and some defendants had not been served with the originating summons.”

The party prayed the Chief Judge of the Federal High Court, Justice John Tsoho, to withdraw the case from Justice Taiwo and reassign to another judge.
Responding, the judge said the issue of the petition should be left for the CJ being an administrative matter, adding that the new practice direction does not permit him to hands off the matter.

When pressed further by Otaru that he must stay proceedings in view of the petition, Justice Taiwo drew the attention of the senior lawyer to the new National Judicial Council (NJC) directive to the effect that in a pre-election matter, no judge shall stop proceedings until otherwise directed by the council.

When the attempt to halt proceedings proved abortive, defendants in the matter applied for an adjournment to enable them to react to issues raised in the suit and to also allow the plaintiffs to move a motion on notice for the matter to be heard during vacation.
The matter has been adjourned till September 3 for the hearing of all pending motions.