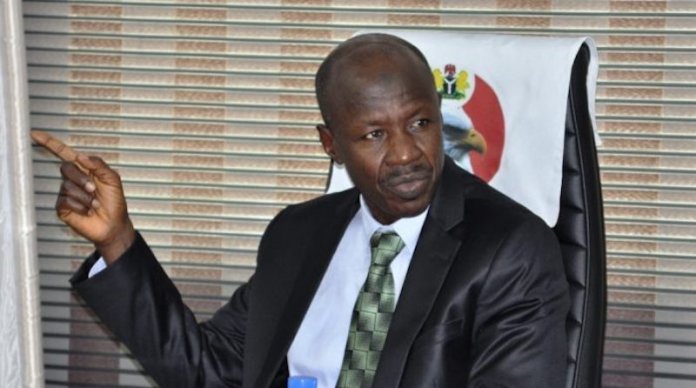 The suspended Chairman of the Economic and Financial Crimes Commission (EFCC), Ibrahim Magu, at the weekend stated that the Attorney-General and Minister of Justice, Abubakar Malami, who accused him of financial impropriety in a 22-point memo to the Justice Ayo Salami-led judicial commission of inquiry, was yet to appear before the panel to substantiate his allegations as required by the law.

He said there was no interim report before President Muhammadu Buhari recommending his removal contrary to reports.

Magu alleged that the AGF, whose memo triggered the panel’s proceedings, was yet to be summoned to testify, as he who “asserts must prove.”

A statement issued in Abuja by Magu’s counsel, Wahab Shittu, said there was no truth that an interim report was submitted to the president when the panel was still taking witness testimonies.

Another counsel to Magu, Mr. Tosin Ojaomo, said going by the evidence tendered so far at the panel, Magu was exonerated, expressing hope that the suspended EFCC boss would be returned to his office.

On the AGF, Shittu asserted that: “The Attorney-General, Malami, whose memo triggered the proceedings, is yet to be summoned to testify to support the allegations against our client, as he who ‘asserts must prove’.”

He said Magu was yet to be allowed access to case files, petitions, presentations, and exhibits even as he was not allowed to present his defence.

Shittu maintained that contrary to reports of submission of interim report to the president, “proceedings are ongoing and witnesses are still lined up for next week beginning from August 24.

“We wish to confirm that the proceedings are still ongoing, and my client is yet to present his defence. We are therefore shocked at the suggestion that an interim report has been submitted to President Muhammadu Buhari. We all know that this is democracy anchored on respect for the rule of law. Central to the rule of law is the element of fair hearing

“Section 36(1) of 1999 Constitution (as amended) is explicit on this. It provides that: “In the determination of his civil rights and obligations, including any question or determination by any government or authority, a person shall be entitled to fair hearing within a reasonable time by a court or tribunal established by law and constituted in such manner as to secure its independence and impartiality.”

The statement urged those bent on prejudicing the proceedings of the panel by planting false stories in the public space to think of the interest of the country and not “prejudge our client whose commitment all along is service to the country.

“The only thing keeping our client going in spite of the desire of mischief makers to pitch him unfairly against the authorities is his conviction of his innocence.”

Shittu reiterated his earlier position that despite repeated demands, his client was yet to access a copy of the allegations against him and was only served a copy of the instrument setting up the panel on August 8, 2020, 35 days after the panel began sitting.