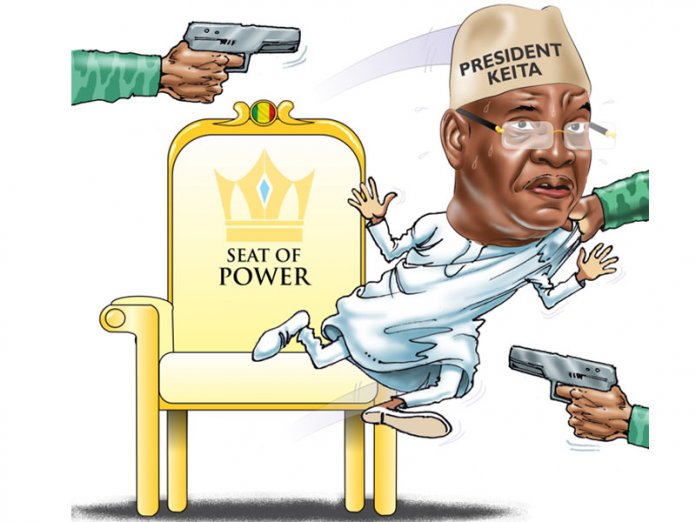 The ambitious men in uniform should be sent packing

Former President Goodluck Jonathan and some other West African leaders arrived Mali yesterday in order to fast track a return to “constitutional order.” The Malian President, Ibrahim B. Keita, was ousted in a military coup d’état last Tuesday. The backdrop to the unfortunate event is the protracted war being waged by insurgents in the northern parts of the country. At its worst stage, the terrorists threatened to overrun Bamako, the capital city, until France deployed their fighter jets to restore a measure of order. Along the line, the insurgents were able to write themselves and their grievances into the political configuration of Mali. In the process, the army acquired political coloration in relation to the opposition. Tension arose, leading to the intervention of leaders from the Economic Community of West African States (ECOWAS) in search of a political solution that has now proved to be elusive.

In spite of the tacit endorsement by a section of Malians who have endured bad governance from politicians, the coup has only widened the dimensions of the country’s problems. In addition to the existing political differences between the parties, the insurgency and terrorism remain unresolved. Added to the mix is the unclear role of a controversial Islamic cleric and the emergence of the army as an illegitimate contender for power. But this is not a new development. In May 2012, a two-day meeting of the Coalition Committee of Malian Patriotic Organisations (COPAM) was followed by the invasion of the presidential palace to physically assault the then interim President Dioncounda Traore. The mob was made up mostly of supporters of Captain Amadou Sanogo who had staged a similar coup before handing over to an interim administration.

As speaker of parliament at the time, Traore had been appointed to lead the country up to the election that eventually produced the leadership that was toppled last week. That arrangement, brokered by ECOWAS, also granted Sanogo, then coup leader, a few cosmetic face-saving sweeteners, including all the benefits of a former leader, an allowance, a house, transportation and security as well as immunity. With ECOWAS backing, Traore was able to manage the transition that brought President Keita to power. But rather than work for the people, Keita ran a corrupt government that was also intolerant of opposition, until he was forced to resign at gun-point last week.

Meanwhile, the ECOWAS Special Envoy to Mali, former President Jonathan is leading the team that is currently negotiating the release of Keïta, Prime Minister Boubou Cisse and other political leaders detained by the military. This followed a virtual meeting by leaders from all member-countries of ECOWAS. We agree with the sub-regional body that the crisis which led to the coup in the Sahelian nation poses grave dangers to peace and security in West Africa. It is a threat to the battle against Islamic extremist groups, and we hope it would be resolved early.

The international community must maintain the resolve to force the military junta in Mali out of power. A combination of economic sanctions and political/diplomatic arm-twisting should force the soldiers into an early election. But even after their hopeful exit, the national security challenges are likely to endure. ECOWAS therefore has its job cut out in terms of finding a political solution to Mali’s problems, and finding enduring solution to the security threat of fundamentalist terrorism in the West African sub-region.

For us in Nigeria, the embarrassing development in Mali is a warning signal. With Boko Haram, Islamic State West Africa Province (ISWAP) and other terror groups in the Northeast and bandits in the Northwest, our internal security challenges are getting more complicated. We are involving the military too extensively and for too long in internal security operations. Our service chiefs are being allowed to overstay their tours of duty and in the process are acquiring political clout. We must guard against mistakes of the ugly past. There is also an urgent need for responsibility on the part of politicians and public officials at all levels. More often than not, leaders in Africa tend to be indifferent to the plight of the people.

While we therefore condemn in the strongest term the military coup in Mali and urge a quick return to civil rule, we need to remind political leaders on the continent that the real bulwark against anti-democratic forces is to work in service of the people.

Quote
ECOWAS has its job cut out in terms of finding a political solution to Mali’s problems, and finding enduring solution to the security threat of fundamentalist terrorism in the West African sub-region