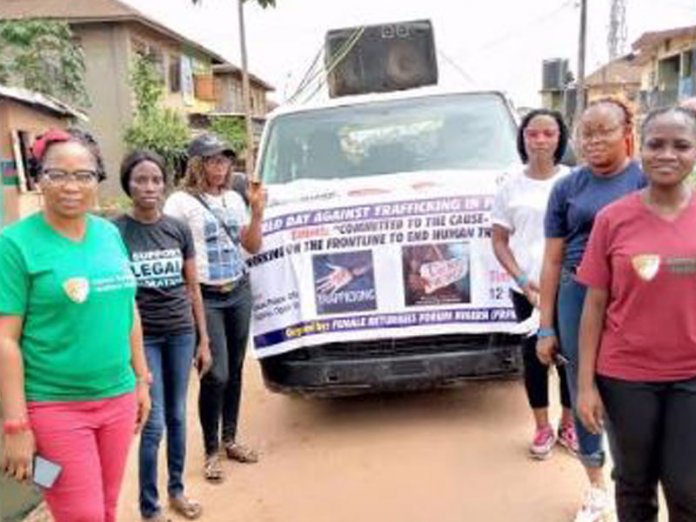 Female Returnees Forum Nigeria in collaboration with Denny Social Welfare Hub and Our Nation for Justice Initiative (ONAJI) rallied across some communities to sensitise indigenes of  Ogun on the negative effect of human trafficking.

The walk, which kicked off from Latawa Palace, Shagamu Lagos, aimed at reaching residents staying far off the palace on the theme, ‘Effects and Solutions of Human Trafficking’ by Lebanese returnees to Nigeria.

“We sensitised the women on the dangers of human trafficking as it concerns them as a community,” the ED added.

The collaborations took the message to the community “because we understand they won’t be able to come to us. It involved one on one reach out and the use of a Public Address System to reach more people”, Otukpe expressed.

For the victims of human trafficking, Otukpe said they could experience a psychological effects during their trafficking experience.

On physical trauma, the speakers further noted that many victims also experience physical injuries, adding that some can be raped beaten and subjected to abuse over a long period of time.

“There is also a higher risk of sexually transmitted disease and all the infection despite a lack of medical care which allows this condition to spread and worsen and often affect individual health permanently,” Sodiya said.

Residents were sensitised on ostracism. “Individuals who have been trafficked can quickly become isolated from friends and family and other social circles excluding themselves from social groups due to stigmatization they face,” she added.

The organisers, however, submitted that many who escaped from traffic in situations like advanced education and resources needed to live independently with some skills.