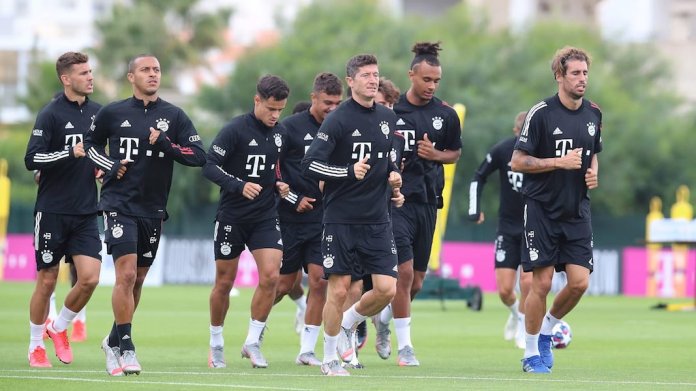 *Unnamed player of the Catalan club tests positive for Covid-19

Bayern Munich were hard at work on Wednesday completing their preparations for the UEFA Champions League quarter final clash with Barcelona on Friday in Lisbon.

Hansi Flickand his team want to continue their European adventure and reach the semi-finals for the seventh time in the last nine years.

While the squad is full of respect for the 26-time Spanish champions and their Argentinian talisman Lionel Messi, Leon Goretzkaappeared confident in the build-up. “I think we can beat any opponent,” the 25-year-old Germany international said in a press conference on Tuesday.

However, Flick was without Alphonso Daviesin Wednesday morning’s training session at the camp in Lagos.

There is, though, little reason to worry, as this was just a precaution with the 19-year-old being given a break due to a slight adductor problem.

Meanwhile, Barcelona have admitted that an unnamed squad member has tested positive for Covid-19.

He was one of nine reporting for pre-season training, showed no symptoms and has been quarantined at his home.

Barca said the player has not been in contact with any senior players, who are due to travel to Lisbon today to prepare for their Champions League quarter-final clash with Bayern Munich.

Because of the Covid-19 pandemic, the Champions League is concluding with a ‘final eight’ tournament in Lisbon, comprising single-leg games held behind closed doors.

Barcelona are to play Bayern Munich on Friday, the day after Atletico Madrid face RB Leipzig.

Everyone who has been in contact with the Barcelona player has been tracked to perform tests.