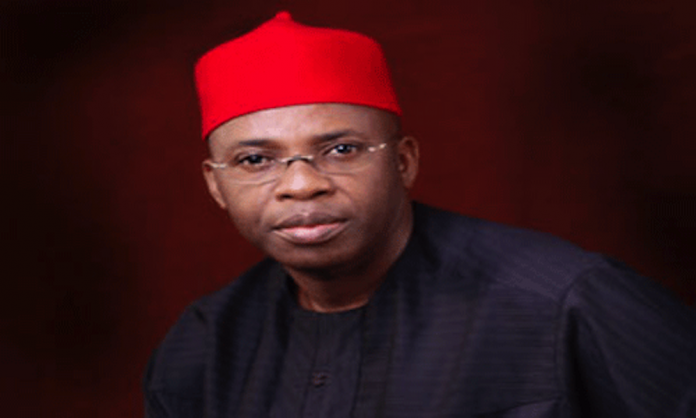 •Ex-gov granted bail, to be charged soon
•Yet to see petition, says lawyer

In a petition obtained by THISDAY, which was addressed to the Inspector General of Police, Mr. Mohammed Adamu and the Department of State Services (DSS), seeking their intervention, Amuchinwa said the former governor not only defrauded her but obtained money from her under false pretence.

However, THISDAY gathered that based on the petition, the police arrested Ohakim and later granted him administrative bail.

It was gathered that the police are intensifying efforts to charge the former governor to court for alleged fraud.

A source at the Force Headquarters yesterday said the police had concluded their investigations and were ready to charge the former governor to court.
The source, who pleaded anonymity, said: “Yes, we have been working on the report and it is now ready.

“The next move is to send the report to the legal department for advice.”

In the petition, dated July 8, 2020, the businesswoman alleged that she met the former governor in her hometown Arondizuogu, Imo State, at the funeral of Chief Raphael Obioha’s wife where the widower introduced her as an industrious and successful businesswoman.

Stating that they exchanged phone contacts that day, she alleged that Ohakim later called her and requested to hold a meeting with her in her home in Lagos and she obliged.

Amuchinwa equally alleged that the former governor collected goods on credit worth N110, 000,000 from her which he refused to pay for to date.

Her petition, which was signed by her attorney, Mr. Ifeanyichukwu Obasi-Nweze, read in parts: “At the meeting, Ikedi Ohakim told our client that he had land for sale; he showed our client a large expanse of land in Lagos-spanning from the Ikeja Airport to the filling station along Ikeja Airport road.

“He purportedly made phone calls to the former Governor of Lagos State, Mr. Babatunde Fashola, whom he claimed was negotiating to repurchase the land from him when he was governor of Imo State.

“After showing the client the said land, Ikedi Ohakim started demanding money in bits from our client. On some of the days, Ikedi Ohakim pretended to be talking to somebody regarding funds he was expecting, only to revert to our client to request for more monies with a promise that once he concluded the sale of the land in question, he would reimburse our client.

“On one of the occasions, Ikedi Ohakim pretended to be talking to somebody in Dubai about funds the person was to send to him; he then told the person to be careful because the authorities were monitoring funds from abroad.”

The petition stated that at the end of the transaction, Amuchinwa allegedly released the total sum of N500 million in cash and goods to Ohakim.

Amuchinwa added that the transaction fell through after Ohakim allegedly failed to provide the land in question.

“Our client upon enquiry discovered that, the only truth in all that Ikedi ever told her was that he was the candidate of Accord Party in the 2019 governorship election of Imo State on the day Chief Raphael Obioha introduced him to our client; every other thing is false,” it stated.

The counsel said his client had already furnished the police with all the documents and other evidence pertaining to the petition and was ready to resubmit the petition to the police upon request.

One of the evidence, he said, included a voice note by Ohakim where he promised that immediately he got to Abuja, he would sell one of his properties and pay her money.

“But that was not to be. It then dawned on our client that she has been defrauded by Ikedi Ohakim.

“In an evil twist, as it were, on January 18, 2020, Ikedi Ohakim invited our client to Bon Hotel, Asokoro and even sent a cab from the hotel to take our client. At the hotel, Ikedi Ohakim requested that our client should meet him in room 205 of the said hotel.

“When our client got to the said room, Ikedi Ohakim seized the handset of our client and ran out of the room, and actually disappeared from the premises of the hotel.

“In no time, police personnel filled the hotel premises, searched our client and took our client to Asokoro Police Station where she was informed that there was an accusation against her by Ikedi Ohakim that she attacked him with a gun when he went to visit her in the hotel.

“Our client volunteered her statement at the Asokoro Police Station where she was detained; and the station, we are informed, has concluded its investigation and has given a report that the allegation was totally false in every material particular wit.

According to Amuchinwa, despite the police division’s report exonerating her of the allegations, the police are yet to act on the above discovery.

She added that the Assistant Inspector General of Police (AIG), Federal Investigation and Intelligence Bureau (FIIB) Abuja is fully aware of the discovery because the matter is being handled by the FIIB.

The petition stated that “in yet another twist, our client was invited on phone by one Margaret Ochalla (who introduced herself as Deputy Commissioner of Police – DCP FIIB) to answer to a petition by Ikedi Ohakim alleging that:

“Our client received N100,000,000.00 only meant for Ikedi Ohakim’s campaign and that our client refused to give the money to him; whereas our client is not a politician; she is not even a registered voter; she is not also, a card-carrying member of any political party.

The counsel alleged that since his client gave her own side of the story in her statement to the police and evidencing the content of this petition against Ohakim, she has been severally threatened by “Ohakim and his cohorts that they will kidnap and kill her if she does not withdraw from the matter, hence our petition.

The counsel called on President Muhammadu Buhari, the IG and the DSS to use their good office to institute an investigation into the allegations against Ohakim; and upon confirmation of the veracity of same, “prosecute Ikedi Ohakim, Eze Cletus Ilomuanya, and any other person culpable accordingly.”

However, efforts to get Ohakim to react to the allegations against him were abortive as calls and subsequent text messages to his mobile phone got no response.

He later referred THISDAY to his lawyer, Mr. Aloy Ejimakor.
Responding yesterday, Ejimakor said the former governor had on July 22 applied for a Certified True Copy (CTC) of the petition and was yet to receive any reply.
He wondered why the police would release the petition when the investigation of the case had not been concluded.

“We discerned that this petition purports as the same petition about which our client (Dr. Ikedi Ohakim) had written an application through counsel on July 22, 2020, requesting a Certified True Copy (CTC). Till date, the police are yet to reply to us.

“We are also puzzled as to why the Force Headquarters will give you the said petition to publish while it is yet to supply us a CTC thereof, and what purpose the publication will serve the police on an ongoing investigation,” he said.

However, THISDAY gathered that it was on the basis of the petition that Ohakim was arrested and after he wrote a statement, he was granted administrative bail.

Efforts by THISDAY to get a response from the spokesperson of the Force Headquarters, DCP Frank Mba, last night proved abortive as his mobile phone was switched off.