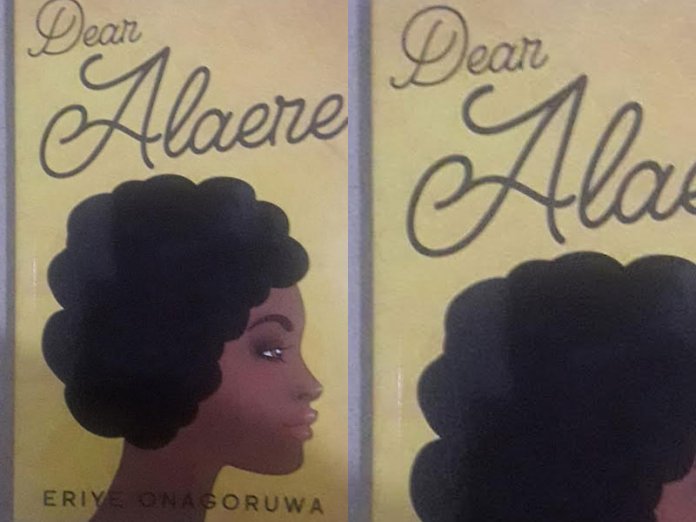 Feminist literature holds a plethora of stories about issues affecting women but this debut novel titled Dear Alaere, written by Eriye Onagoruwa seems to be a little more than that. Though its simple plot is woven around narratives of women from the point of view of a narrator, Alaere, the kaleidoscopic narrative is a truthful fiction based on everyday realities.

Set in Lagos, the novel is a contemporary read, beaming lights on the life of a working class lady, Alaere from Southern Nigeria who is married to a Yoruba man, Laja. She takes the reader through a maze of daily activities, revealing her experience in corporate organisations through an assemblage of stereotypical characters. In the firm called Neuterone, where she cuts her teeth as a legal and compliance officer, Alaere encounters the office politics that is born out of illicit office romance as exemplified in the affairs between Lady K and Chief. Well, the affair is short-lived as Chief picks a younger mistress who becomes a boss to the overbearing and estranged Lady K.

The narrator presents the argument for women empowerment through the characters of Ebidemo and Anitorufa, a young couple whose lives were shattered by an unfortunate incident. Ebidemo is killed in a motor accident leaving his full-time housewife in a total mess upon his demise. Also, the same theme surfaces in the next firm she works with namely Criole. But this time, the narrator shows how some women work against other women in the corporate structure rather than support them.

Spotlight falls on several socio-economic issues in the novel such as the quality of life in a city like Lagos vis-à-vis weak healthcare systems, poor transportation for a mega-city, nepotism and of course, the age-long discrimination against women and girls. The touching story of Alhaji Wasiu, whose wife dies during her delivery bears the complexity of the worldview of women in Africa. Alhaji Wasiu, who is Alaere’s driver is bent on having a male child; arguing that the female child needs just a little secular education as she will wind up in a man’s house. That faulty reasoning plunged him to putting pressure on his wife to have a son which never happened. As a widower, he is left with seven daughters to care for. The author’s reference to newspaper headlines is a creative effort at giving the plot some political relevance.

Back to Alaere, her quest for self-actualisation at work is sometimes expressed in culinary gratification which is symbolised by her love for puff-puff. Her home, which should be a safe haven from the toxic work environment, is infiltrated by the interference of her demanding mother-in-law. Through the judgmental remarks by Ms. Fasakin, the author developed an annoying character that is almost ubiquitous in the life of women with fertility challenges.

Onagoruwa’s literary skillet pan popped with intrigues, betrayals, deaths, romance, friendship, murder and a sweet ecstatic end. The story is deeply emotional, capable of evoking empathy and admiration from the reader. A balanced self-portraiture is seen in the depiction of Alaere as both a cerebral and fashionable woman wading against the tides of cultural boundaries that are created by myths and misconceptions to define women.