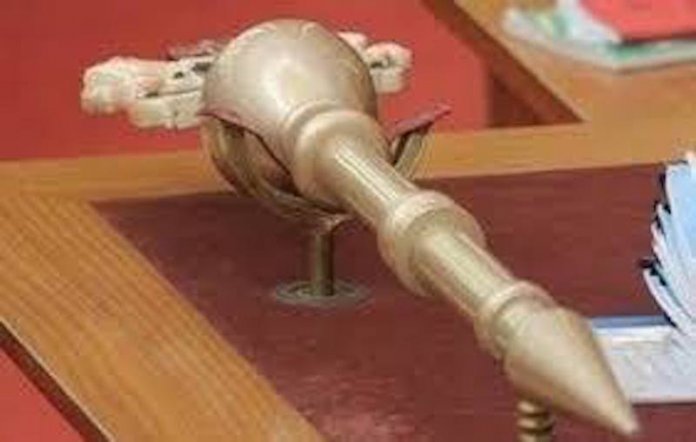 The Edo State House of Assembly on Wednesday impeached the Deputy Speaker, Rt.Hon.Yekini Idaiye, on grounds of alleged gross misconduct.

Speaking, Okhuarobo said “Mr.speaker with me is a notice of impeachment of the deputy speaker of the house signed by two-third members of the house.

“The impeachment of the deputy speaker is on the grounds of gross misconduct and divulging of official secrets,” Okhuarobo said.

The lawmakers following deliberations on the petition unanimously adopted the motion through a voice -vote.

In his place, Roland Asoro was made the Deputy Speaker of the House shortly after he was nominated and the oath of office and allegiance administered on him by the Speaker .

The motion for the nomination of Hon. Roland Asoro as the new Deputy speaker was moved by Hon.Emmanuel Okoduwa (Esan North East I) and seconded by Ephraim Aluebhosele (IEsan South-east)

Meanwhile, the state assembly has accused the Governor of Imo State, Hope Uzodinma, and other APC leaders of plotting to forcefully takeover the assembly with the importation of mace to perfect the act.

It also alleged that the plan was in connivance with the impeached Deputy Speaker, Hon. Yekini Idiaye, who recently declared support for the governorship candidate of APC, Pastor Osagie Ize-Iyamu.

Speaker of Edo State House of Assembly, Francis Okiye, who made the allegation during a media briefing at the Government House, venue of the state Assembly, called for the intervention of President Muhammadu Buhari.

Okiye in the briefing themed “Urgent Need to Call Imo State Governor, Sen. Hope Uzodinma And Leaders of The APC in Edo State to Order Over Their Plan to Violently and Illegally Take Over The Edo State House of Assembly”, further alleged that the perpetrators planned to import a fake mace to take over the assembly working in concert with the deputy governor.

He said the action if allowed to happen is akin to lighting a match in an already tensed political environment, which conflagration is capable of causing crisis in the state on a scale that would be beyond imagination

“We call on Edo people whose mandate and interests the state legislature holds and protects, to rise against this planned attack and plot to subvert their will and subjugate them using external forces.

“We urge lovers of democracy across the world, institutions that uphold democratic tenets and values, pro-democracy groups, to denounce this planned illegalitiy that seeks to distract a duly constituted authority.

“We recognise the constitutional rights of the three members of the House of Assembly to support the candidate of their choice, but that should not distract them from coming to work to carry out the job they were elected for”, Okiye noted.

Reacting to the allegation by the Edo State House of Assembly, Imo State Commissioner for Special Projects, Simon Ebegbulem, described the allegation as baseless, adding, it is a mark of insensitivity.

He said “The illegal Speaker and his governor are not making sense with this baseless allegation. I don’t even know what they are talking about because there is no House of Assembly in Edo state. I think that is why the so-called Speaker is running away from his shadow like a criminal that will always run once he sees a law enforcement agent.

Ebegbulem wandered why Okiye should even mention the name of his boss into the political problem of Edo State if not that all of them are jittery of the impending defeat that awaits them come September 19.

His words, “I don’t know why he should draw the leg of His Excellency, Governor Hope Uzodinma into his political problems. My governor is interested in working with other APC governors and stakeholders to reclaim Edo State which has been an APC state before Governor Obaseki donated it to the PDP.

“The illegal Speaker and his principal are already jittery because of the imminent defeat in the coming election. You can see that his aides are resigning everyday including his Deputy Speaker. Now he is left with five lawmakers and does that show that he is in charge.”