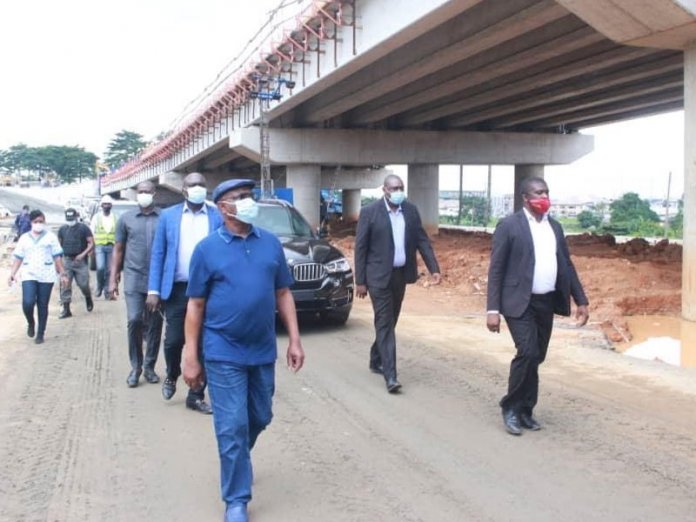 While the three flyover bridges simultaneously under construction in Port Harcourt are yet to be completed, Rivers State government has approved N18billion for the construction of the fourth one, Davidson Iriekpen writes

For Governor Nyesom Wike of Rivers State, there is no limit to what he can do for his state and people. Last week, he again approved N18billion for the construction of fourth flyover at the GRA Junction along the Port Harcourt-Aba Expressway to address the perennial the traffic problems usually experienced in the axis by the people of the state.

Giving details of the project, the state Commissioner for Information and Communications, Mr. Paulinus Nsirim, said the approval would cover the dualisation of Tombia Extension Road to Ikwerre Road and Ezimgbu Link Road to Stadium Road. He said the projects which would be executed by Julius Berger Nigeria Plc, would expand the length of the roads by 680 meters while that of the flyover would be 502 meters.

Nsirim who added that the state government took the decision to further strengthen its infrastructural development drive, revealed that 20 indigenous engineers would be trained by Julius Berger Nigeria Plc during the contract as part of government’s policy on youth empowerment and skill acquisition. He also said that the government approved the building of a new legislative quarters for members of the House of Assembly following the dilapidation of the former quarters, adding that the move was in line with Wike’s commitment to ensure that the three arms of government worked in synergy for the overall development of the state.

Currently, the Wike government is embarking on the construction of three flyover projects at Rumuogba (Artillery Junction), Rumuokoro Roundabout (Okoro-nu-odu), and Rebisi (Garrison Junction), aimed at addressing the traffic problems in the city of Port Harcourt.

The projects when completed will put a smile on the faces of the people who are currently going through hell moving from one point to another. The projects, which were initially scheduled to be completed in February 2021, would now be delivered before the end of the year.

Just when many were thinking that the government would allow the three flyover projects simultaneously going on to be completed before embarking on another one, the governor approved the construction of a new one. This, to many observers, indicates Wike’s passion for development.

Wike while speaking to journalists after inspecting the flyover bridges recently, said his administration was mindful of every promises made to Rivers people which include delivering critical infrastructure that would improve the economic status of the state and the life of the people.

“If you look at the Rebisi Flyover at Garrison junction, you’ll see that they are working hard to finish with the concrete super structure by October so that motorists can ply the bridge. That’s what I’ve always said, when you give work to good contractors, you will be comfortable that those jobs will be delivered. From what I have seen, ahead of their schedule of the work, it is important to know that Julius Berger is committed to make sure they handover the projects even before the time scheduled,” he said.

Commenting on the Rumuola flyover that is billed for expansion, the governor said the chaotic traffic situation experienced there would be addressed with the planned expansion.

“Rumuola flyover was built under the military government. When there is maintenance work to do or a vehicle breaks down, it causes a lot of traffic jam, so the need to expand the flyover became necessary. The contract papers have been signed and I believe they are preparing to go to site within the next few days. Generally, we are happy to achieve such feat within the shortest possible time and with the of quality job done. We want the people to be confident that we will not take their mandate for granted and they will not regret reelecting us,” he added.

Regional Manager, Julius Berger Nigeria PLC, Mr. Juergen Fischer, said they have increased the pace of work at their sites and with the concrete super structure laid, the Rebisi flyover will be delivered at the end of October 2020. He explained that while the Rumuogba Flyover will completed one month later, the Rumuola flyover will be expanded to allow for service lanes, a new roundabout, and installed traffic light.

Anybody who knows Port Harcourt well, know that traffic challenges are the city’s greatest headache and this is what Wike is trying to tackle head on. For those who live and do business in the state, modern urbanisation has made the flyovers an inevitable infrastructural development component because they are built over man-made structures such as roads and intersections, to prevent congestion and provide a more convenient way to navigate through the traffic. They are also built to provide safe and convenient passage for the pedestrians, help to streamline the traffic control system by reducing traffic gridlock and minimise the risk of off-road crashes, amongst other advantages.

One of the key pledges Governor Wike made to Rivers people when he assumed office in 2015, was to embark on comprehensive urban renewal as well as actualise the age-long yearnings of the indigenes and residents of the local government areas to be able to connect and access the rest of the state by tarred roads and durable bridges.

Five years into his tenure, the urban renewal programme in the capital city and indeed the interconnectivity across the length and breadth of the state is on course.

The capital territory of Port Harcourt and Obio/Akpor is undergoing massive construction as restoration works, including underground drains, sidewalks, green areas and street lights on most of the roads in the old and new Government Reservation Areas are all at very advanced stages of completion. This is in addition to the three flyovers that are progressing simultaneously and expected to beat the deadline of February 2021.

The construction of the fourth flyover bridge across GRA junction and accompanying dualisation of Ezimgbu road and the dualisation of Tombia Extension, GRA to link Ikwerre will all be delivered on schedule.

There are other road projects simultaneously going on across the state. For instance, construction work including the dualisation of Kira-Sapkenwa-Bori-Kono, straddling three Local Government Areas in Ogoni heartland, has almost been completed and the construction of Oyigbo (Mbano camp) to Iriebe, linking Oyigbo and Obio/Akpor Local Government Areas of the state, has already been completed and would have been inaugurated if not for the outbreak of COVID-19.

With s visionary drive to ensure the delivery of excellent and legacy infrastructural projects, the Wike administration has pursued the accomplishment of its promise to complete the long-abandoned roads to the coastal communities of Opobo and Andoni in Opobo/Nkoro and Andoni Local Government Areas of the State and the Ogoni-Andoni-Opobo (Unity) road. In fact, citizens of Opobo Ancient Kingdom drove home for the first time in centuries only last year.

The many projects the governor is embarking on simultaneously has made infrastructural development in the state an inclusively holistic and contrary to the notions and misleading opinions of critics, who have not traversed the state to see and confirm for themselves, the transformational and aesthetic metamorphosis which is not just taking place all over the state, but opening up and interconnecting the entire state into one cohesive entity.

Lagos State has often served as a reference index in developmental analysis, but many will agree that, despite the impressive strides it has achieved, there is still the excruciating hardship and suffering of endless and frustrating gridlock, because of the absence of well structured roads and bridges network, thus leading to uncontrollable congestion on the few alternative outlets out of the city.

This is exactly what the Rivers State Government, already conscious of the traffic build-up that overwhelms critical points of the city even now, is taking concrete and proactive measures to address and resolve in future, with the construction of the flyovers.

In addition to easing the traffic tension, the projects are also mainstreaming youth empowerment and skill acquisition for indigenous engineers, apart from generating employment and empowering local contractors.

For instance, 20 indigenous engineers would be trained by Julius Berger Nigeria Plc during the contract period as part of government’s policy on youth empowerment and skill acquisition and that is just the initial projection. The prospects had been more expansive and comprehensively favourable, if not for the coronavirus outbreak that has drastically impeded robust operations and activities.

For many who do understand what the governor is doing, he is definitely building for the future. The capital city and territory is expanding rapidly and population explosion with its attendant challenges in a burgeoning commercial hub, which almost every part of the state is gradually transforming into with the brilliant economic module of strategically concessioning major government owned assets to willing and capable private investors, is a critical futuristic component that must be addressed today.

Observers believe that all what Wike is doing now are what his immediate predecessor failed to do. They contend that if his predecessor had done a quarter of what he is doing now, even with all the resources at his disposal, the state would have been better for it.

Justice Suzzette Eberechi Wike, while hosting women and children in 2015 had expressed confidence that based on her husband’s antecedence and passion to satisfy others, he would unleash positive development strides on state.

She said: “I know the man I am married to. He is a determined and focused man. He will continue to deliver in line with the promises he made to the people. I know he will live up to the expectations of the people.”

This, to many observers, is what the people of the state are witnessing today.

“In a very long time to come, it would be difficult to have a governor like Wike who is very passionate to develop the state. He is a rare gem.”

“When his wife, Justice Wike, in 2015 told us that her husband, based on his antecedence and passion to satisfy others, would wonders in the state, I thought it was just another political talk. I know better now. The governor is simply unequalled and unparalleled,” said Nnamdi Ogbu.