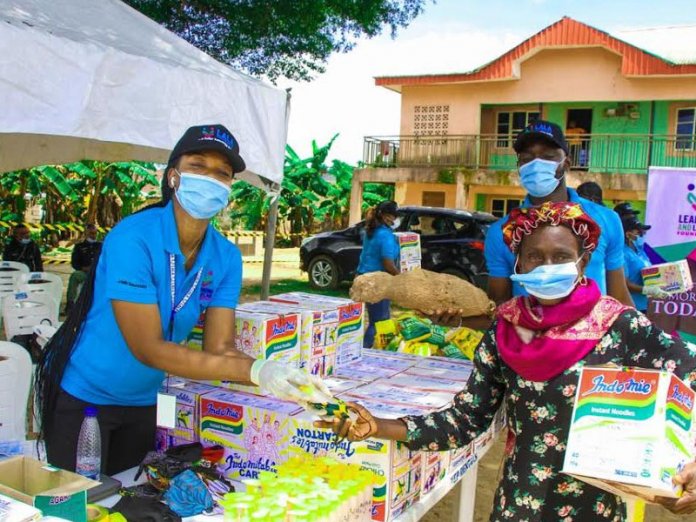 Recently, the foundation launched a sensitization and advocacy program, at Oyobu clan in Opokuma ( KOLGA) Bayelsa State. Where representatives of about a hundred families were sufficiently and necessarily educated in izon language on Covid-19 pandemic.

In addition, palliatives of a large tuber of yam, a carton of noodles, a bag of rice, face masks and hand sanitizers were distributed.

Lilian Alaere Ebifegha, the founder of the Foundation, and an illustrious daughter of the community, said the gesture was necessary to support the efforts of the state and federal government in cushioning the socio-economic effects of the pandemic.

“The effect of COVID-19 is greatly felt in all corners of the world. The novel virus has brought untold hardship to the people of the community in particular, especially the elderly ones as well as widows and orphans.

Our mission is to assist in every possible ways while also calling on the government and well-meaning Nigerians to key into the vision of the foundation which is, ‘Advancing world peace, as well as well-being at all levels – individual, family, tribal, national, and world.” she added.

Speaking to newsmen present, one of the board member of the Foundation, Mr Alfred Okubo explained that data of all households in the community had been collected earlier, to guide the foundation in its assignment. He further assured that continuous efforts will be made to ensure the community gets assistance from the foundation.

The feedback from participants revealed that the desired overall aim for the communication campaign was achieved. This is premised on the absolute satisfaction they expressed.

In appreciation, an elder who represented the community thanked the foundation for their consistent demonstration of love for the people, and for the zeal and sacrifice with which they executed the charity campaign.

The founder of the NGO, Lilian Alaere Ebifegha during her final speech, acknowledged the efforts from members of the Foundation who assisted in the distribution of the palliatives. She expressed further gratitude to the board members Ms Gabrielle Cherechi Egerue and Ugochukwu Dimpka for their prime support towards executing the project.