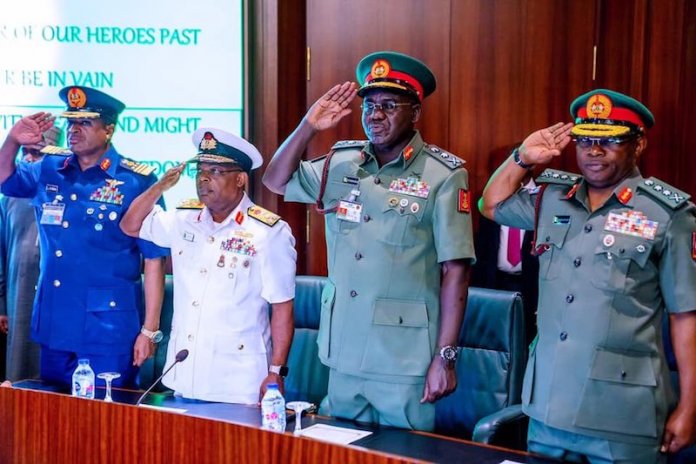 Kingsley Nwezeh looks at the security challenges facing the nation, the continued stay in office of the military service chiefs, the senate resolution calling for their resignation and the trillions of Naira sunk into the security sector since 2015 without any appreciable impact

Last week, President Muhammadu Buhari, gave a spirited defence of the military service chiefs, who literally cowered behind him as the Senate and the citizenry, who have borne the brunt of frequent killings across the country, fired verbal missiles at them, calling on the president to effect their sack.

The Chief of Army Staff, Lt. General Tukur Buratai, also drew the ire of some sections of Nigerians when he stated that the end of the insurgency war depended on Nigerians.
He predicated his argument on the fact that 100 percent of the actors involved including the insurgents are Nigerians.

Some have interpreted this to mean that the military has abdicated its constitutional responsibility and waited on Nigerians to take a decision to end violent crimes or allow it to fester.

This is without prejudice to the genuine efforts made by the military in terms of sacrifices, several war strategies deployed in spite of operational difficulties, joint operations and the decimation of scores and scores of insurgents via aerial and artillery bombardments in the North.

Boko Haram insurgency alone is believed to have claimed at least 100,000 lives, displaced more than 2.6 million people, caused pain to over 52, 311 orphans and 54,911 widows, and led to about $9 billion worth of damage.

UNICEF blames the militant group for killing around 2,295 teachers and destroying more than 1,400 schools destroyed since the conflict started ten years ago, according to Al-Jazeera Study Center, citing statistics provided by UNICEF.

Data generated by the West Africa Network for Peacebuilding (WANEP) in its 2019 policy brief on Nigeria and it’s National Early Warning System (NEWS) showed that the war against armed banditry recorded a death toll of over 1,058 people in Zamfara, Kaduna, Katsina, Sokoto and Niger States between January and December, 2019.

This figure has since moved up with killings recorded daily.

A letter addressed to the Inspector-General of Police by the the International Society for Civil Liberties and the Rule of Law (Intersociety) last week said 620 Christians were killed In 18 months and 20 days in Southern Kaduna.

The letter signed by Mr Emeka Umeagbalasi and four others said “with the current rate of anti Christian butcheries going on in the state with the central Government of Nigeria and its security forces and law enforcement agencies doing little or nothing, the Christian populations in the State are at high risk of being completely wiped out in coming few years.”
This killing trend occurred in other parts of the country with increasing number of casualties.

The Senate Weighs in

Worried by the worsening insecurity in the country and the rising number of casualties of military and security personnel, the senate last week passed a resolution asking the service chiefs to step aside following a motion by the Chairman, Senate Committee on Army, Senator Ali Ndume, who is also from Borno State.

Fadahunsi said that the present crop of service chiefs should step aside for the new ideas to come in order not to jeopardise the security system.

The motion was approved after a voice vote.

Senate Leader, Yahaya Abdullahi (APC, Kebbi), said the armed forces were under a lot of pressure.

“This pressure is reflected in the amount and number of soldiers we are losing due to ambush by terrorists and bandits. This particular issue needs to be tackled.

“It means our security forces will have to reorganise their deployment, they have to employ new tactics in this fight,” he said.

The senate had earlier adopted a similar resolution last January.

The Presidency Fights Back

“The presidency notes the resolution, and reiterates that appointment or sack of service chiefs is a presidential prerogative, and President Muhammadu Buhari, in his capacity as Commander-in-Chief of the Armed Forces, will do what is in the best interest of the country at all times,” a statement signed by Presidential Spokesman, Mr. Femi Adesina, had said.

The Arguments: Why They Can’t Be Sacked

Various reasons have been adduced as regards why the service chiefs should not be sacked. The arguments range from the rational, sublime to the ridiculous.

President Muhammadu Buhari had consistently pushed the idea that removing military service chiefs in the middle of hostilities would be counter productive. Many agree with this view but it quickly dissipates when the carnage spirals.

There are also the allegations that many stakeholders including foreign interests, government officials, top military brass, international and local Non-Governmental Organisations (NGOs), arms, food and other logistics suppliers

are all in the mix since it has become the booming business of war.

There are also conspiracy theorists, who believe that there’s a pact between the president and service chiefs to deliver the 2019 elections to the former and remain on their seats till 2023.

The contribution of some stakeholders in escalating the security situation may also have partially informed Buratai’s recent position that the end of the war depends on Nigerians.

“As to whether banditry, terrorism and so on will end, I think it all depends (on us). If Nigerians want it to end today, I can assure you, it will end if everybody joins hands.

“These bandits are not outside Nigeria. They are not from foreign land. Ninety-nine per cent of them are Nigerians. These kidnappers, I will say 100 per cent of them, are Nigerians. So it is not just a military, security agency’s task to end the insecurity in this country. Everybody has a responsibility to discharge,” he said.

He said such politicians believe that by sponsoring violence and other acts of criminality, they would be blackmailing the Buhari administration in order to contest the forthcoming general election.

Masari, who spoke in Katsina recently, said most of the bandits and Boko Haram attacks in the country were sponsored by some politicians.

In commending the military he said, “the military and the police cannot do it alone, they don’t have the numbers, neither do they have all the equipment required to complete the fight alone.

“Community members have all that it takes to inform and support the fight against insecurity,” he said.

So far, government has spent more than N5.62 trillion on national security in the last five years.

Terror-Financing and NGOs with 40 Bank Accounts

There is also the case of Non-governmental Organisations (NGOs) involved in money laundering using Nigerian banks in suspicious transactions believed to be linked to terror financing.

In a bid to track the movement of laundered funds in the banking system used to finance terrorism, the Economic and Financial Crimes Commission (EFCC) had declared that it would commence an investigation into the financial dealings of some Non-Governmental Organisations (NGOs) operating in the North-east.

Speaking at a recent meeting with banks’ compliance officers in Maiduguri, suspended Chairman of EFCC, Ibrahim Magu, had queried the rationale behind a single NGO keeping forty bank accounts.

He warned that banks should comply with the Money Laundering Act by reporting to the anti-graft agency, any person or persons moving cash above the allowed threshold.

Magu said EFCC would soon commence the profiling of Non-Governmental Organisations with a view to monitoring their financial activities.

He had said: “We must profile all the NGOs in the North-east. I don’t know why an NGO will open more than 40 bank accounts.

“We are going to ask your various banks to give us statements of accounts for each and every NGO.

“The issue of money laundering, terrorist financing and leakage of information will be eliminated by the commission with the help of bankers across the country.”

But in spite of the huge budgetary expenditure over the years, security challenges have remained intractable.

It remains to be seen how this national tragedy will end.

Governor of Katsina State, Alhaji Aminu Masari, also accused politicians of sponsoring insurgency and armed banditry. He said such politicians believe that by sponsoring violence and other acts of criminality, they would be blackmailing the Buhari administration in order to contest the forthcoming general election. Masari, who spoke in Katsina recently, said most of the bandits and Boko Haram attacks in the country were sponsored by some politicians 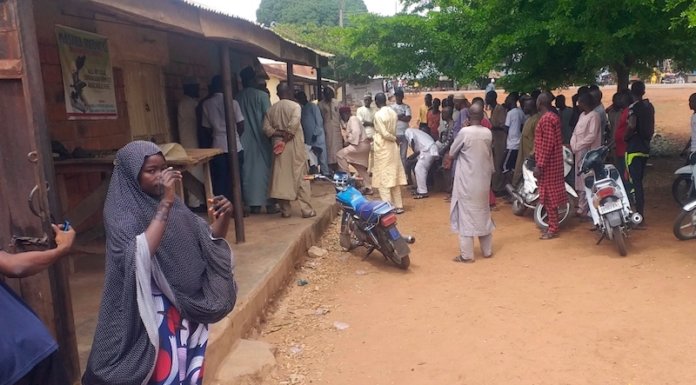