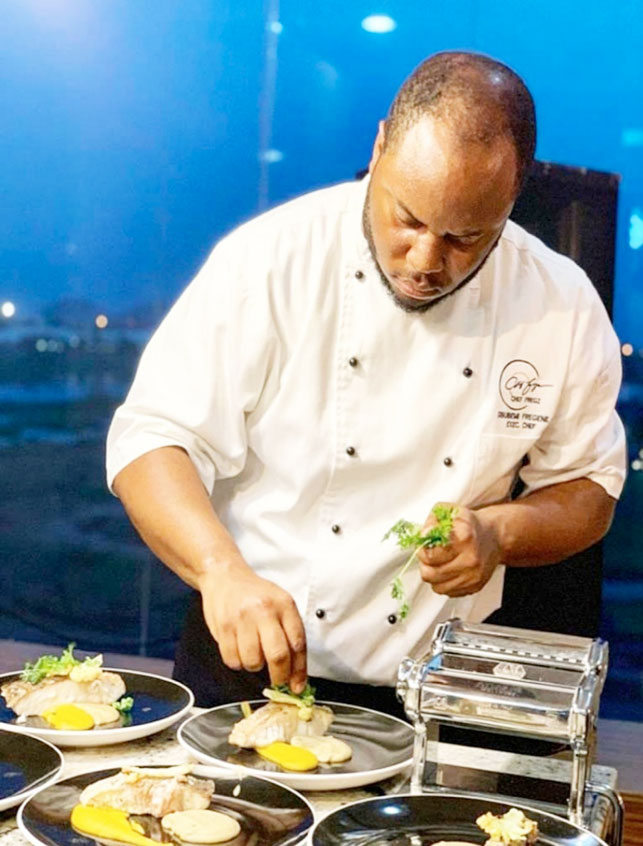 His bearded face sizzles with sweat as he tosses the egg in mid-air, uses his left hand, armed with a spoon, to stir a stewy pot of delicacy. He pours a potpourri of ingredients in the pot, stirs again, then, has a taste. His countenance signposts satisfaction. His recipes have produced a wonder of a meal. “Bon appetit,” he intones. That’s the culinary maestro, Gbybemi Fregene aka Chef Fregz. Fregene is more than a chief, writes Vanessa Obioha

Arguably, chefs draw inspiration from different forms of art. It could be the rhythmic flow of music or dramatic motion pictures or aesthetic lines of visual art. Whatever they fancy is reflected in their culinary output. For Chef Fregz, it is the whole nine yards. He devours music, movies, and art with gusto. However, music stands out for the private chef. It sets the tone for his cooking. Even as the raging coronavirus pandemic altered the culinary business, the young chef still enjoys his sonics and sizzles.

“I love music a lot. It is a big part of my soul,” he gushes. “I love music from before I was born when I was much younger to today’s music. but I’m very stuck on music from when I was growing up and from the 70s and 60s as well.”

He adds, “Music is very important when I’m cooking because it sets the mood and tone. It makes me get through the cooking better. Even my staff love playing music. According to them, it gives them ‘ginger’. It is a really beautiful thing and I like listening to the lyrics, finding out who produced the song, why they wrote the song. I like researching everything about music. It is really powerful and I love it.”

A visit to his social media pages reveals his love for the two vocations. He tweets ravishingly about his latest music favourites and often takes his fans down memory lane of some of the good oldies that tickle him. On his Instagram pages, he teases his latest culinary creations that are often named after a particular song. Think of Duduke jollof rice and Cajun barbecue turkey wings? Or perhaps order his latest Fregzybration boxes that come with a variety of his signature servings. That’s the unique style of the gourmet king.

Two decades ago, his name would ring no bell as Nigerian chefs were not in the spotlight. But in the 2010s, there was a sudden interest in Nigerian food. Everyone lovingly hung the tag ‘foodie’ round their neck. An avalanche of ‘how to cook’ our local dishes videos and articles dominated the internet. There were also food bloggers who wrote passionately about the beauty of our culinary culture.

As the frenzy intensified, corporate bodies including banks such as GTBank and First Bank began to throw their weight behind the food industry, organizing food fairs that showcased the best of Nigerian foods in an appetizing way that can only be imagined. It was during this period that people began to put a face to the culinary magicians who for long were only popular within the four walls of their kitchens. It was within this period that Fregz gained popularity.

He was hailed for his fusion menus which presented an aromatic marriage between our local delicacies and international cuisine. However, he would not take the credit alone. He modestly traced the rise of the Nigerian culinary art to others who started the movement.

“Our food was always in the spotlight but on the wrong stage. We grew up with our mother’s food and that of caterers from the parties we attended. Their foods actually herald our great Nigerian food. but it was on the wrong stage because we were too familiar with it. We didn’t rate it. So familiarity actually bred contempt. But about 10 years ago, when we had young people like me and a few others like Lohi Busari (Lohi Creates), Ozoz (Kitchen Butterfly), and Dunni Obata (Dooney’s Kitchen) starting a movement on the culinary scene.

“They were Nigerian food bloggers in the diaspora — Dunni lives in London, Lohi lives in Canada while Ozoz used to live in the Netherlands but later moved to Nigeria — who were nostalgic about our foods and decided to champion it in a strange land. I think that being in a strange land or a country that isn’t really your heritage pushed people like them to say hey, ‘Nigerian food is good enough to stand next to any international food.’ So that triggered the movement for us to put it on the right stage: social media, next to international food, and fuse with international flavours as well. That spectrum for how grand and beautiful Nigeria food can be is expanding every day,” he says.

Indeed it is, with the growing popularity of our jollof rice across the pond and the features of some of these chefs on international magazines.

Before Chef Fregz became a reputable brand, he was known as Gbubemi Fregene, a young man who hailed from Abeokuta, Ogun State but grew up in Benin City, Edo State. He studied Industrial Relations and Human Resource Management at Covenant University. It was while in the University that Fregz suspected that he may foray into the culinary business.

His first business was Mai Suya where he made barbecues and finger-foods in the backyard of his grandfather’s house. By 2009, he established his own catering service called DVARD. The following year saw him jetting off to Paris, France to hone his culinary skills at Le Cordon Bleu Culinary Institute. It was there that he learnt classical French cooking techniques while garnering different cultural influences. After graduating with a Diploma in Cuisine, the young chef worked as an intern at the Market Restaurant and was later retained until he returned to Nigeria.

On his return, Fregz only had one mission in mind: to transform the Nigerian culinary scene by appealing to a younger generation. So he rolled his sleeves and brought magical transformations to the Nigerian platter, creating explosive deliciousness through his fusions.
If you ever look at asaro, the popular Yoruba yam porridge in a particular way, it is almost unrecognizable by the time Fregz puts his Midas touch on it.

“My affair with Nigerian food and how it could be better started with just how we could present it better,” he explains. “I thought about eba and okra for example. I did a special which I called the Prada Eba and Lamborghini Okra and it was seafood okra. I just created it a little differently. So while I’m not doing mainly Nigerian food, there are still lots of Nigerian influences in my food. I have very forward Nigerian menus.”

His ingenuity has made him a household name. He is the first African chef to feature and do a live cooking show at the Dubai Food Festival. Fregz who is in his early thirties has cooked for presidents, diplomats, and other highly placed individuals in the society.

His business acumen came into play during the lockdown. While many restaurants were closed and events cancelled, leaving most chefs and restaurateurs out of business, the private chef’s catering delivery service Fregz Á Porter boomed. He curated new menus and delivered boxes of tasty meals to his customers, sometimes working overtime.

Despite the successful outcome, Fregz is not immune to the impact of the pandemic on the culinary business in Nigeria. He puts it this way.
“The picture is quite grim. The culinary business in Nigeria is broken down into many sectors. You have those who work in the hotel industry, the fast-food owners, bespoke chefs like me, the roadside food sellers, the bukas, just to name a few. Everybody’s affected. The roadside food seller doesn’t attract the number of people she used to, the hotels don’t have guests, people are no longer throwing big parties.

“Most restaurants have not fully opened. The option is to deliver food which seems to be working and people are finding ways to work with minimal staff or under minimal conditions to keep the business afloat and cover some percentage of the staff salary.”
He added that the pandemic marked the end of big parties. “People are not going to throw big parties anymore, rather there will be smaller events.”

Looking at the culinary business in Nigeria which boasts of over 800 Quick Service Restaurants (QSR) according to a 2014 report by the Association of Fast Foods and Confectioners of Nigeria (AFFCON), Fregz has no doubt that Nigerian restaurants can fetch a Michelin star — the European rating system that rewards restaurants for excellence.

“Of course, it is going to happen. But the only thing that we need to do is stop being pretentious. We should look at the range of restaurants that have Michelin stars. Some Michelin starred restaurants are in villages, some are street food vendors while some are established fine dining restaurants. I think we should just aspire to that level of quality and consistency; that is what really earns you a Michelin star. When people come over and over again to your restaurant and still get the same gastronomic experience.”

He continues: “But it’s also in the education of our system, of the people that work together on the team, to let them understand that what obtains in a Michelin establishment is some seriousness. The team in general has to be ready. Everybody that is involved in the establishment has to be ready because getting a Michelin star is no joke.”

Having been a private chef for so long, Fregz still harbours a dream to own a restaurant someday.

“Yes, I do plan on having a chain of restaurants someday. It’s always been my dream from when I was very young to have restaurants in Lagos, Abuja, Port Harcourt, London, Hong Kong. So definitely I want to change directions because I believe I have different stories to tell and they can’t be confined to one place.”

For now, he is the fusion forward private chef who likes to showcase different flavours, drawing from his experiences and loves. And by loves, you guessed right if you thought of music.