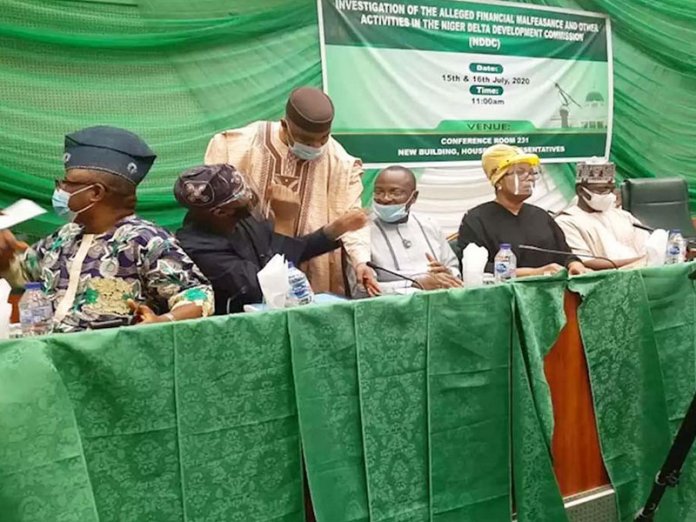 In 2018, Nigeria exported 3.8% of the world’s total crude oil with a value of $43.6 billion. For decades, the country has lived on the black gold but its oil-producing areas have lived in squalor and one of the reasons is illustrated by the ongoing corruption allegations levelled against the NDDC’s Interim Management Committee, reports Nosa James-Igbinadolor

As weary as most Nigerians have become with corruption in the country, and the venality that exemplifies the commanding heights of national, state and local leadership, it is unlikely to get better any time soon. This sleazy reality was well put across by the Acting Managing Director of the Niger Delta Development Commission (NDDC), Prof. Kemebradikumo Pondei, at the investigative hearing on the N40-billion corruption allegation against the commission.

The Senate had on May 5, 2020, set up a seven-man ad hoc committee to investigate alleged financial recklessness of the Interim Management Committee (IMC) of the NDDC. The IMC had been empanelled in February by the President to allow for a forensic audit of the corruption-sick commission. What emerged out of the tragi-comedy at the National Assembly was a salad of corruption, financial recklessness, sexual harassment and voodoo fetish oaths, themselves, recurring themes in Nigeria’s political economy landscape.

The struggle for resource control by communities in the oil-producing areas in the Niger Delta, according to J.I Dibua in his analysis of Citizenship and Resource Control in Nigeria, assumed a central position in the discourse on the national question, ethnic minority politics and environmental degradation in Nigeria from the early 1990s.

“This was largely due to the activities of Ken Saro-Wiwa and his Movement for the Survival of the Ogoni People (MOSOP) that greatly helped to popularise and internationalize the issue,” said Dibua.

It is paradoxical that despite the abundant wealth the region parades, which happens to be the fiscal basis of the Nigerian state, the majority of the people in the Niger Delta live in a state of chronic want. The region epitomizes one of the extreme situations of poverty and underdevelopment in the midst of plenty. Infrastructural development is very low, while poverty and unemployment levels are very high. Access to basic social amenities remains very limited.

There is an almost universal agreement that the Niger Delta region, which produces most of the country’s wealth, had suffered untold neglect in more than 60 years since oil production began there.

To address this, the Oil Mineral Producing Areas Development Commission (OMPADEC) was created in July 1992 to rehabilitate and develop the Niger-Delta areas.

OMPADEC came short of that mandate. The commission was hamstrung by financial imprudence, contract proliferation, and lack of goodwill from major ethnic groups in Nigeria, faulty project ideas, maladministration and lack of funding, nepotism, corruption and faults in the implementation strategy. Contracts were massively inflated, and full payments were made for shoddy or simply non-existent jobs.

It was against this backdrop that the NDDC was established in 2000 by former President Olusegun Obasanjo. While President Obasanjo’s intention was indeed noble, the reality of the NDDC clearly shows an agency of government unmistakably disconnected from its mandate.

“The story of NDDC in the last 19 years has not been so rosy. The NDDC, we believe could have achieved more. You have a stunted child who could have been a six-footer. We need to find out the reason why the child could not grow. Is it that the child was not given enough nourishment?

Akpabio has been fingered as being part of the rot when he was recently accused of corruption, fraud and sexual harassment by the former Managing Director of the IMC, Ms. Joi Nunieh.

On the instruction of Akpabio, Nunieh alleged, some contracts were awarded by the commission to unregistered companies, some of which got registered after they were awarded the contract.

“In some cases, contracts were pre-awarded before the designs were given so you find out that most of the projects were abandoned,” she claimed.

Nunieh further said of Akpabio, “He told me, as he did to my predecessor Mrs. Akwagaga, to change all the dollars – $120million in the account of the NDDC at the time to pay for his contracts, the desilting contracts that he got, the water hyacinth and all.”

The hideousness of the devastating corruption within the commission borders on treason; a crime of betraying one’s country. The litany of the grave and felonious accusations of malfeasance by the various actors in the macabre tragedy from the National Assembly is mind-boggling. The Interim Management Committee of the NDDC alleged that “the Chairman House Committee brought out an emergency training programme for N6.4 billion, claiming the job belongs to the Speaker and said the commission should pay him N3.7 billion.”

In addition, a company called Candour, owned by a serving senator, claimed they initiated statutory payments from LNG. In the letter, they collected $28 million and exchanged the money at N360 to $1, at a time CBN was exchanging for N225 to $1. They were also paid 20 percent of $28 million.

A consulting firm that was contracted to collect money from international oil companies (IOCs) on behalf of NDDC was paid N1 billion monthly.

In 2019, NDDC in just seven months awarded a total of 1,921 emergency contracts valued at NI.07 trillion while its budget total was N400 billion that year.

Part of what the forensic audit uncovered was that a particular project was awarded 55 times. In addition, the NDDC awarded two projects to run from 2017 to 2019. First, a water hyacinth emergency project of which N800 million was budgeted but N10.3 billion was spent. Though a desilting project had N2 billion earmarked for it in the NDDC budget, N37 billion was spent.

Between 2016 and 2019 emergency contracts of over N2 trillion were awarded by the NDDC under the supervision of both chairmen of National Assembly’s committees.

Pondei said, “We have faced so much pressure from some members of the National Assembly to pay for 132 jobs which have no proof of execution. We have refused to pay N6.4 billion for those jobs. We believe an IMC set up as a cleansing structure cannot become part of the old story of rot.”

Pondei received N10 million as COVID-19 palliative, while the Acting Executive Director Projects, Dr. Cairo Ojougboh, got N7 million. Furthermore, the IMC paid N302 million as tour duty allowance to its members, even though the country was on lockdown and the NDDC offices were closed. The IMC also paid its members N85.6 million in April and May as overseas travel allowance to attend graduation ceremonies abroad even though the whole world was on lockdown.

But there is an individual, Kolawole Johnson of Act for Positive Transformation, who does not like what was happening in the NDDC. Johnson alleged that multiple payments were made for the same contracts, such as to ClearPoint Communications, which was paid N536 million and another N641 million for ‘media support’ on 22 May.

Johnson explained further, “Mr. Charles Odili, a director in the commission, got N1.15 million into his UBN account from ClearPoint Communications. He got another on the 21 May and N5 million again on 24 May into his UBN account. He got another one again. If you ask for the accounts of these companies and individuals, you will find how they made back payments to the NDDC directors.”

Johnson also gave details of how the IMC members and their internal collaborators shared millions of naira on fictitious tasks. Prof. Pondei collected N51 million monthly for maintenance of his guest house, while the IMC moved out money through the account of some directors. It was alleged that there were duplicate payments for project monitoring, with several millions of naira paid into the personal accounts of the IMC members.

Weighing in on the issue, Charles Harry, former president of Ijaw National Congress (INC), said, “A lot of people should go to jail. The impunity in NDDC has gone beyond the level where people should keep quiet. The level of stealing is mindboggling and this is aided and abetted by people who are supposed to be a watchdog over this institution (National Assembly).

“Instead, they are collecting hundreds of contracts that they don’t execute and they are paid upfront fully. It is sickening!”

Speaking in a similar vein, Ledum Mitee, a former President of the Movement for the Survival of the Ogoni People, noted, “The NDDC is a scam on all of us people from the Niger Delta because there are people out there, who had hoped that what the NDDC would do might add value to them.

“What value does it add to hear they spent N450 million for face masks and hand sanitizer for the police, including consultancy, community relations, which is a euphemism for money they are sharing to people. What have these got to do with development? They have never said we did this project.”

The Federal Government’s decision to again dissolve the Interim Management Committee of the NDDC and bring it back under the supervision of the Presidency as recommended by the Senate is unlikely to change things drastically.

Twenty years after the formation of the NDDC, the sordid revelations out of the National Assembly might just be the excuse needed to de-bureaucratize the development of the region.

Does the Niger Delta need the NDDC?

It is a question that people of the region need to interrogate and truthfully answer. THISDAY columnist and Chairman, THISDAY Editorial Board, Mr. Olusegun Adeniyi, noted recently, “The essence of legislative oversight is to detect and help eliminate areas of waste within public agencies, make government accountable to the people, and evaluate the impact of policies and programmes on the society while ensuring that all these are in promotion of the public good.

“But a National Assembly whose members are busy chasing contract papers will sooner or later lose the moral authority that surrounds its constitutional power. That exactly is the situation today.”