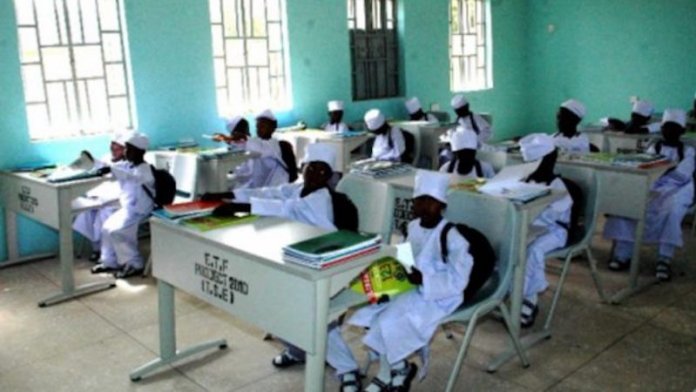 Francis Sardauna reports that the modernisation of the Al-majiri system of education by the Katsina State Governor, Aminu Bello Masari is aimed at eradicating the distorted practice of turning children meant to acquire Islamic knowledge to beggars

The Northern Governors’ Forum, under the leadership of Plateau State Governor, Simon Lalong, had returned almost all Al-majirai to their states of origin across the region over the ravaging COVID-19 pandemic.

The decision of the governors generated controversy as to the legality and constitutionality of their action; whether it is permissible in the 1999 Constitution of the Federal Republic of Nigeria to repatriate citizens in their country as a measure to tame the spread of the infectious disease.

For instance, Section 41 of the 1999 Constitution provides that “Every citizen of Nigeria is entitled to move freely throughout Nigeria and to reside in any part thereof, and no citizen of Nigeria shall be expelled from Nigeria or refused entry thereby or exit therefrom.”
In view of the above constitutional provision, it is therefore clear that the repatriation of the Al-majirai by some northern governors is illegal and unconstitutional.

This, perhaps was why Masari, despite receiving over 1,800 repatriated Al-majirai from Kano, Kaduna, Gombe and Nasarawa States declined deporting the ones in his state.
Instead, the governor is making pragmatic efforts to reform the entire Al-majiri system of education in the state to enable the pupils acquire both Islamic and western education.

Masari is working hard to come up with a reform that would integrate the Al-majiri system of education in a more acceptable and sustainable way that would avert all the misconceptions about the system.
Therefore, the administration is planning to establish an agency that would directly and squarely tackle the old methods of acquiring Qur’anic education to ensure that it is in conformity with the basic minimum education required for any child.

No wonder, Masari in an interactive session with journalists, said the Al-majirai are Nigerians and deserve to be accorded all rights by giving them the protection that is necessary within the capacity of the state government.

“The Al-majirai are Nigerians; they have rights so we are going to treat them as human beings by giving them all the protection that is necessary within the capacity of the government. We are not going to criminalize the Al-majiri system of education, we are only criminalizing who is a criminal.

“But the methods and procedures is what we are going to correct to ensure that it is in conformity with the basic minimum education required for any child, because it is the right of any child to aquire education.”

To actualise this dream, the governor has set up a committee comprising religious and traditional leaders, government official and security agencies that would take census of all Al-majirai to enable government integrate them into normal school system without abandoning their Qur’anic education.

The historic committee is expected to carefully study the Al-majiri system of education in the state and ascertain the state of origin and the total number of Al-majiri schools across the state through a community by community based approach.

The committee which has commenced work, is working with Islamic teachers, scholars and other relevant stakeholders to capture the bio-data and all necessary information of each Al-majiri across the 34 local government areas of the state.

Addressing journalists during the committee’s assessment tour in Baure Local Government Area, Karaduwa said the sole aim of the committee was to give the oldest Al-majiri system of education that has been abandoned without desirable attention, a critical look with a view to placing it on a sound footing.

He said the terms of reference of the committee was to collect data of the Al-majiri schools, comprising the names of the schools, tutors, propriators, pupils, the location of the schools, the pupils’ background, place of origin and where they are studying.
According to him, “government deemed it necessary to come up with this committee of highly reputable people in the society to address the Al-majiri system of education in the state which has been neglected for so many years.

“Most of the members of the committee are products of the same system of education, therefore they are in a better position to come up with solutions of the identified problems or ills associated with the system with the sole intention of making it more sound and acceptable for the society”.
He added: “Repatriation is not the single aim of this committee. The aim of the committee is to give the oldest system of education that has been left without desirable care a critical look with a view to bringing it on a soundfooting.

“The terms of reference of the committee is to collect data of all the Al-majiri schools in the state. The data comprises of names of the schools, their locations, names of the tutors, propriators, the pupils, their backgrounds, place of origin and where they are currently studying.”

He affirmed that the committee after the collation of data across the state, would sample opinions of critical education stakeholders on how best to revamp the Al-majiri system of education in conformity with the basic education required for any child in the society.

The chairman of the committee explained that the committee members would also liase with the state Ministry of Education and State Universal Basic Education Board (SUBEB) to proffer recommendations that will enable government to bring up a standard curriculum that can address both Islamic and western basic educational needs of the Al-majirai.

Meanwhile, the modernisation of the Al-majiri system of education in the state would eradicate the distorted practice of turning children who were meant to acquire Islamic knowledge into beggars, thereby leading to the demonisation of the entire system.

The Masari-led administration is also making adequate workable measures while modernising the system so that children, especially from the vulnerable background, do not have to go to streets for begging in the name of acquiring Islamic education.

Accordingly, the governor has banned street begging in the state and urged parents not to send their children outside the state for Islamic education, but to enrol them in Islamiya schools within their domains to enhance their safety and socio-economic well-being.

The idea behind the Al-majiri system of education may be worth preserving, but the schools ought to be properly integrated into the education sector and their curriculum upgraded and revised in such a way that allows the children to get both Qur’anic and secular education.