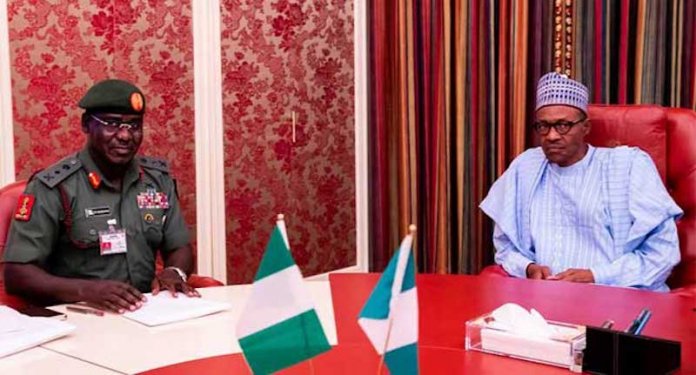 •Says 99% of terrorists, 100 of kidnappers are Nigerians

Chief of Army Staff, Lt. Gen. Tukur Buratai, met yesterday with President Muhammadu Buhari to brief him on efforts by the military to tame the wave of banditry and terrorism, especially in the North.

Buratai, told State House reporters after the meeting that the nation’s security situation was now better than what it was last month when the president gave the military marching orders to tame insecurity.
Buratai attributed the containment of insecurity to the success of different operations in the North-west and North-east.

He added that 99 per cent of terrorists and 100 per cent of kidnappers terrorising the country are Nigerians.
Buhari, on June 18, had read the riot act to heads of security agencies, saying their best was not enough and warned against further excuses on their inability to tame insecurity.
But Buratai told the reporters that he briefed the president on updates on security situations in affected parts of the country.

He said: “I’m here to brief Mr. President on the task he gave me and I have accomplished one aspect of the task and to brief him on our operations, especially operations Sahel Sanity in the North-west and of course, the ongoing operations in North-east and other security issues that pertain to the Nigerian Army actually.

“I briefed him on the efforts going on in the North-west. We have seized the initiative. The security situation, I assure you, is under control and it is not like what used to happen a month or two ago.

“We are working very hard and the troops are doing very well and I commend them for the efforts they have put in so far. This includes the kinetic and the non-kinetic aspect of our exercise – Sahel Sanity.”
According to Buratai, notable progress has been made through the joint operations of the armed forces.
He said kidnappings, serial killings and cattle rustling had been brought under control and people in affected parts of the country could now go to their farms without fear.

Promising sustained efforts to promote security, Buratai canvassed the support of all citizens to achieve this.
He also appealed to the press to play down reportage of cases of banditry and terrorism, saying such criminal activities thrive on publicity.
“We are there fully, supporting Operation Hadarin Daji, which is a joint operation of the armed forces and the security agencies.

“So far, this collective effort is making tremendous progress in the area of bringing normalcy. Unlike the series of killings, kidnappings, cattle rustling and of course, the threats to prevent the people from going to their farms this season, this has been removed with the presence of the number of troops in the North-west and they are carrying out surveillance operations, patrol to ensure that no one is molested if you go outside the community to farm or harvest.
“We will ensure that this is sustained throughout this farming season and beyond. What we require is the full support of everyone in the area.

“It is also important for the press not to escalate the situation through reportage, giving prominence to the bandits, terrorists activities. This will go a long way in weakening them.
”You know for the criminals, publicity is their oxygen. Without that publicity, they will be ineffective coupled with our efforts in the military and security agencies. We will do everything possible to get rid of these criminals,” he added.

Buratai said whereas the main task of the military was to defend the country against external aggression, the armed forces were only supporting the police to contain other crimes.
Asked when Nigerians should expect an end to banditry and terrorism, Buratai said such criminality had been in Nigeria since inception, adding that only terrorism is new.
He stated, however, that the end of such criminality would only be dependent on Nigerians’ preparedness to cooperate with security agents.

“As to whether banditry, terrorism and so on will end, I think it all depends. If Nigerians want it to end today, I can assure you, it will end today if everybody joins hands because these bandits are not outside Nigeria. They are not from foreign land.

“These terrorists, 99 per cent of them, are Nigerians. These kidnappers, I will say 100 per cent of them, are Nigerians. So, it’s not just a military, security agency’s task to end the insecurity in this country. It’s only when it goes bad that we are called in, but everybody has the responsibility to handle that.
“Some of the insecurities are as old as history itself and it all depends on what you are doing to contain or defeat it at a particular time.

It is the totality of your effort that will determine the escalation or containment of the insecurity in the country.
“It is not today that we have been contending with armed robbery, as far as I know, armed robbery has been existing in this country even before we were born and it’s still going on.
“Kidnapping too is as old as the history of the country but it all depends on the level it’s been perpetrated at a particular time.

“Terrorism is relatively new and insurgency, we had had that experience before and we contained it, just like the different crises we have had in different locations,” Buratai said.
According to him, if all Nigerians continue to do is to complain and criticise security agencies, the situation may not get any better.
However, he assured the nation that insecurity would be pushed back and there would be appreciable improvement in security of lives and property soon.