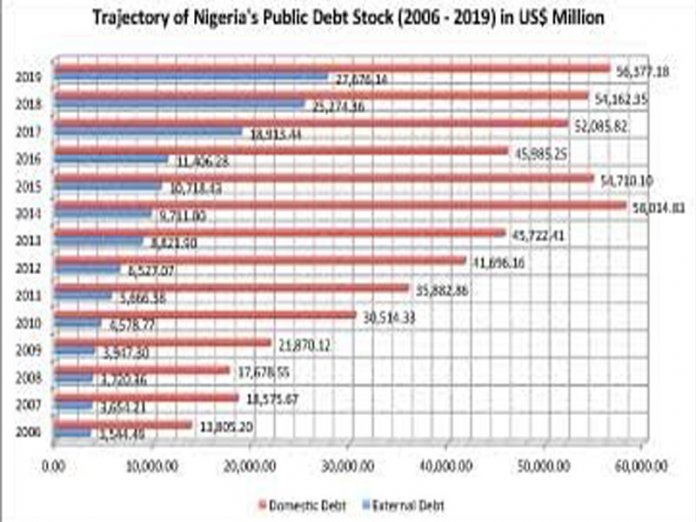 Citing the increasing public debt stock and declining revenue, Nigeria’s leading fiscal analysts have warned that the country may relapse to the 1984 economic disorder stoked by debt crisis or slump into insolvency except pragmatic measures are taken to manage its debt exposure.

Although the analysts are not really worried about the volume of public debt, they have disapproved the country’s records of debt to GDP ratio, GDP growth rate per annum and debt servicing to revenue ratio, which they argue, can force the country into excruciating economic conditions.

While Utomi feared that there might be a relapse to the syndrome of 1984 when other countries ended trade relations with Nigeria due to failure to meet its debt obligation, JohnBrowne warned that the country’s rising debt profile with shrinking revenue might push the country into bankruptcy.

At a Commonwealth Enterprise and Investment Council webinar that focused on Nigeria on Wednesday, the Vice President, Prof. Yemi Osinbajo disclosed that the revenue of the federal government had reduced by 40% due to the impact of COVID-19.

Also, on Thursday, the International Monetary Fund (IMF) reviewed Nigeria’s debt to GDP ratio upward, projecting that it might rise to 36.5% in 2020 from 29% it was in 2019, thereby describing a spike in government borrowing in the short-term as worrisome.

Penultimate Friday, the Debt Management Office (DMO) put the country’s public debt stock at $79.30 billion as at March 31, an increase of 15% from the figure that was recorded for the corresponding period in 2019, which was about $69.09 billion.

DMO’s current statement of account did not include $3.4 billion, which the International Monetary Fund approved for Nigeria on April 28 in emergency financial assistance under the Rapid Financing Instrument to support the authorities’ efforts in addressing the severe economic impact of the COVID-19 shock and the sharp fall in oil prices.

Likewise, analysis of Nigeria’s debt stock trajectory by THISDAY based on the Debt Management Office’s annual reports and statements of accounts between 2003 and 2019 empirically supported these highly informed observations.

At its peak, for instance, DMO’s reports revealed that the administration of former President Olusegun Obasanjo opted for debt negotiation in 2004, negotiated debt forgiveness with the Paris Club, an informal group of creditor nations.

From $3.65 billion in 2007 when the Obasanjo administration ended, reports analysed by THISDAY showed that the country’s external debt stock rose to $27.67 billion in 2019, accounting for an increase of 657% in 13 years.

Under the President Umaru Yar’Adua administration, DMO’s records that external debt stock grew from $3.65 billion in 2007 to $4.57 billion in 2010, representing a growth of 25% in the year Yar’Adua passed away.

Under the President Goodluck Jonathan administration, the reports revealed that the external debt rose from $5.66 billion in 2011 to $9.71billion in 2014, an increase of about 72% in the year before the former president lost re-election to President Muhammadu Buhari.

Within the first four years of the Buhari government, analysis of DMO’s reports by THISDAY revealed that the external debt had risen by about 185% at the end of the 2019 financial year, the highest increase ever recorded after the Obasanjo administration secured debt relief that brought Nigeria’s external debt to $3.54 billion in 2006.

With these grim realities, Utomi feared that there might be relapse to the syndrome of 1984 when developed countries severed trade relations with Nigeria due to the failure to meet its debt obligation while JohnBrowne warned that the country’s upward debt trajectory with shrinking revenue “is an indication of a country moving towards bankruptcy.”

Utomi, founder of Centre for Value in Leadership, however pointed out that debt “is not a sin, though argued debt “is largely a function of what a government, a corporate organisation or an individual does with it.”

In response to the regressive trends that characterise Nigeria’s current public debt stock and other economic indicators, Utomi observed that it was similar to what happened to the country in 1984.

In 1984, the political economist said Nigeria got to “a stage where it could not service her debt. And the foreign banks began to shut down the lines of credit to Nigerian banks. We started lacking essential commodities.

“If you cannot pay your debt, people will stop trading with you. That happened in Nigeria in 1984. We worked out all kinds of means around it. In fact, this is what we called counter trade or trade by barter. We gave crude oil for milk and sugar. It was a very inefficient way to trade,” the don warned.

Amid the 1984 debt crisis, Utomi disclosed that Nigeria had to create a company called National Supply Company with the express objective of trying to provide milk, sugar and salt to Nigerians. We used to have a long queue.”

He, therefore, explained what brought the country “to this point is simple. When you have a level of debt that is not sustainable, you refuse to trim the cost of governance, legislators are milking the country to death, the executives are finishing the country, they are not investing in things that will create taxable revenues, what do you think will eventually happen. Obviously, it will soon get to what happened in 1984.”

JohnBrowne supported Utomi’s viewpoint with reservation that rising debt “should ordinarily not be an issue. But the problem is the usage. In Nigeria usage of debt has always been opaque in utilization for economic development.”

He, also, lamented that in Nigeria, most of the debt “cannot be properly accounted for in terms of usage. Even when accounted for, it is mostly used to support recurrent expenditure budgets.

“If compared with GDP average annual growth rate of 2.6% within the same period, it is obvious that our productivity is lagging behind the growth of the debt. This scenario is an indication of a country moving towards bankruptcy.”

He, however, said the way forward for Nigeria “is to restructure the debt profile in terms of components parts and pricing. Government should constitute a debt restructuring committee of experts whose mandate is outside the current civil service.

“The committee, whose tenure shall not exceed three years, will work cooperatively with existing civil service structure, but independent and private sector focused in the debt restructuring. The office of the committee should reside in the Presidency and be operationally funded by the executive arm of government.”

In specific terms, the political economist asked the governments at all levels “to trim the cost of governance to 25% of the present cost. We must cut off the cars, the pay of legislators, and salaries of permanent secretaries. Nigerians are deliberately allowing themselves to be in this mess.”