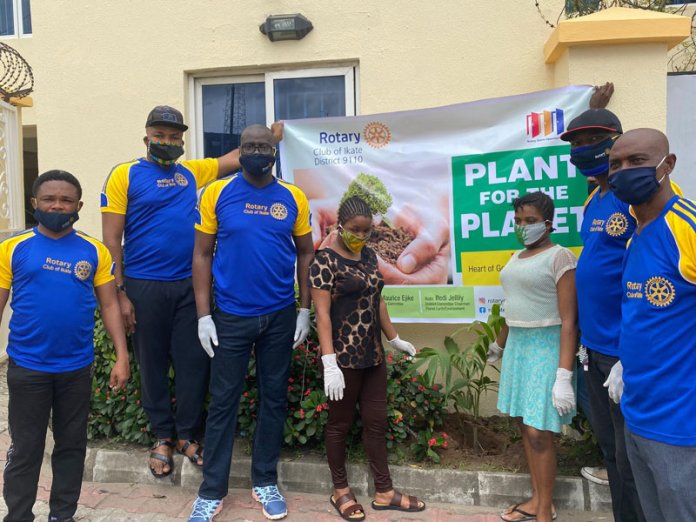 Members of the Rotary Club of Ikate led by its New President, Rotarian Kolawole Awotoye and her Ambassador, Maurice Ejike visited the Hearts of Gold Children Hospice to celebrate the World Planting Day by helping to plant trees around the host vicinity and also gave out provisions and essentials to the children as well. It was a warm welcome the visitors got as they arrived at the hospice with the kids sending warmth and greetings.

Speaking on why they came to the hospice, The President shared, ‘As members of the Rotary Club International we have decided to key into the tree planting celebration and for us it’s about planting trees and beautification. So we felt the best way to do it is to come and spend time with the children of the Hearts of Gold Hospice. So we can plant with them and In turn they understand the importance of keeping their environment green. We also brought items to donate to them as well.’

For the President he believes in the serving of humanity relentlessly and keying into this he aims to do a lot more good during his tenure. Some of the kids of the Hospice were also present and were assisted in the planting of the trees around the compound of their home by some of the rotary members. Photos were taken with the children as well as members who in turn took time to celebrate with the kids as well and presented the several essentials brought in the for children.

Talking with Ambassador Maurice Ejike he shares, ‘ Our visit to the kids is a way of us to think out of the box. Because for world tree planting day celebrations people hardly come to think of the kids here but rather visits only the parks, bus stops and more. We decided to acknowledge they are part of the planet and making their environment green is paramount for us.’