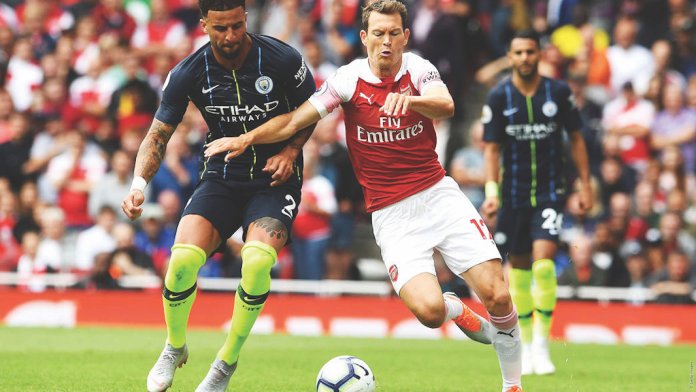 Champions, Manchester City will be taking one more step towards defending the English FA Cup as they take on Arsenal in Sunday’s semifinal of the world’s oldest football competition. While the Gunners will be boasted by midfield defeat of Liverpool in the Premier League midweek-the first time in five years, the Citizens will draw their inspiration in Monday’s Cas overturn of their two year ban from the UEFA Champions League. Earlier today, the red half of Manchester-United will take on another London team, Chelsea in the first semifinal in what could be describe as a dress rehearsal to their top-four Premier League battle

Arsenal and Manchester United will lock horns in the semi-finals of the FA Cup tonight at Wembley Stadium with both teams determined to book their spot in the showpiece final.

City are the holders of the competition, having landed their sixth title last season, but Arsenal are the most successful team in FA Cup history, lifting the famous trophy on 13 occasions.

The Gunners would be guaranteed a position in the group stages of the European competition if they win the FA Cup, though, and the fact that head coach Mikel Arteta shuffled his pack against Liverpool suggests that he is very much prioritising this competition.

Having taken just a point from their two games against Leicester City and Tottenham Hotspur between July 7 and July 12, it was vital that the London club picked up a positive result against the champions.

There is no question that there is work to be done this summer, but it would be a special finish to the season for the club if they could manage to lift the FA Cup, particularly considering that they will need to get past Manchester City in the semi-finals and then either Chelsea or Manchester United in the final.

Arsenal have beaten Leeds United, Bournemouth, Portsmouth and Sheffield United in this season’s FA Cup, and they will be bidding to reach the final of the famous tournament for a record 21st time.

The last time Arsenal recorded victory in the competition was in 2017, when they overcame Chelsea but the capital giants have lost to Nottingham Forest and Man United in the last two seasons but are one step away from another final.

The omens are not exactly terrific for Arteta’s side as they have lost each of their last seven games against City in all competitions, including 3-0 defeats in both Premier League games during the 2019-20 campaign.

The London club did win the last FA Cup clash between the two sides, though, recording a 2-1 victory in the semi-finals of the 2016-17 competition before beating Chelsea in the final, and they will be hoping for a repeat of that in the latter stages of this season’s tournament.

City, though, will not be in the mood to relinquish their control of the trophy as they have already missed out on the Premier League title this season due to Liverpool’s incredible campaign.

Pep Guardiola’s side have already won the EFL Cup this term, though, and are on course to reach the quarter-finals of the Champions League, having recorded a 2-1 victory away to Real Madrid in the first leg of their last-16 tie.

Lifting the EFL Cup, FA Cup and Champions League would certainly go down as a hugely successful campaign for the club, even taking into the account the disappointment of their Premier League season.
City will enter this weekend’s match off the back of a 2-1 win over Bournemouth in the Premier League on Wednesday night, and they have been victorious in all three of their matches since a surprise 1-0 defeat away to Southampton on July 5.

Guardiola’s team have beaten Port Vale, Fulham, Sheffield Wednesday and Newcastle United in this season’s FA Cup to advance to the final, and they are bidding to win the competition for the seventh time in their history.

Another FA Cup would move them level with Liverpool and Aston Villa in terms of trophies won, with only Tottenham Hotspur, Chelsea, Man United and Arsenal ahead of them.

The fact that either Chelsea or Man United will be waiting in the final makes this semi-final even more special, and there is simply no downplaying the importance of the match to the two sides, who have both struggled for consistency during their respective Premier League seasons.

City will be feeling pretty good about themselves at the moment, having learned on Monday that their two-year European suspension had been overturned, and they will be determined to continue their excellent record over Arsenal when the two teams lock horns tonight.

Meanwhile, Manchester United and Chelsea put their Premier League top four battle to one side this weekend as they lock horns in Sunday’s second FA Cup semi-final.

Chelsea (third) and United (fifth) are separated by just a single point in the race for Champions League qualification, though FA Cup glory will be on the minds of Frank Lampard and Ole Gunnar Solskjaer for now.

Both Lampard and Solskjaer are in a similar situation: two young managers who were legends as players for their respective clubs, but need silverware despite time being on their side.

Arsenal or Manchester City await in the final next month, while a defeat could deal a serious blow to either United or Chelsea’s confidence in the battle for Champions League football.

Despite Chelsea sitting above United in the table, the Red Devils must be favourites given they have beaten the Blues three times already this season.

Form does tend to go out the window when it comes to cup football, but Lampard will have to make changes to prevent Solskjaer getting a fourth win over him.