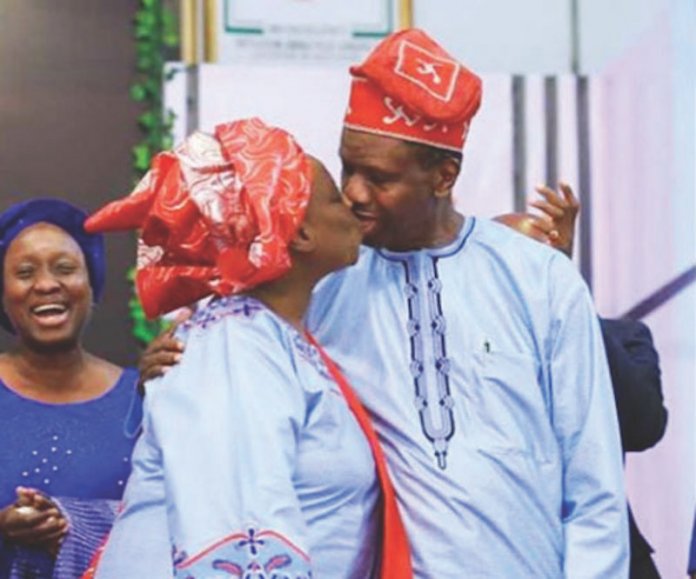 Pastor Enoch Adeboye celebrated his wife, Foluke, on the occasion of her 72nd birthday last Monday. Taking to his social media page to praise his wife, who is fondly called Mummy G.O, Adeboye, in a lengthy message, revealed things she does to tickle his fancy despite being grandparents. In the birthday message, the General Overseer of the Redeemed Christian Church of God (RCCG), described his wife as a powerful woman who still manages to acknowledge him as the head of the home and accords him respect.

Daddy G.O advised young women to care for their husbands and not transfer roles to maids and domestic staff. The prized man of God, who also advised young brides about learning from his beloved wife on how to treat their husbands, had several internet users and other highly placed men talking after his tribute.

The 78-year-old shared this word of advice: “Today is my wife’s birthday and there are lessons that women, especially so many young brides can learn from her. She is a powerful woman, I know that. She has many people who take instructions from her, but as powerful as she is, and even though she has seen me in my weakest moments, I have no doubt that I am her head. If I insist, she would cancel whatever she was to do and come along with me. The Bible in Ephesians 5:23 says: ‘For the husband is the head of the wife, even as Christ is the head of the church…’

“The husband is the head of the wife. No matter how educated or successful you are, your husband is your head and you must regard him as such at all times. It is a terrible thing for a husband to feel his wife is his head. Many men are misbehaving in their marriages simply because they want to establish that they are the head of their wives. Also, my wife is my number one fan. She wrote in the book Mathematics of Marriage – which we co-authored, that as my helpmate, she knows she cannot help me without my instructions, so when they come, her response is ‘Yes sir’.

“Busy as she is, she still cooks my meals and serves me herself. Many young ladies these days leave everything to the house help. My wife still trims my nails for me. There was a time when I was a teacher and was staying far from town. She had to cut my hair during that period. She is the only partner of the Adeboye Corporation; she doesn’t delegate her primary duties to anyone else. Just like the virtuous woman described in Proverbs 31:1-31, I safely rest on my wife. Anything I uphold, she upholds too. Can your husband rely on you? Make up for your husband’s weaknesses, celebrate his successes, be his number one cheerleader. I wish my lovely wife a Happy Birthday.”

The pair got married in 1967 shortly after Adeboye completed his first degree at the University of Lagos, graduating with a bachelor’s degree in Mathematics. Their union has produced four children — three boys and a girl. Only a while ago, the “powerful” cleric had revealed how far he is willing to go for his dearly beloved wife. During one of his weekly early morning devotions series, Pastor Adeboye made it clear that his wife, Foluke, is not to be messed around with.

The religious leader said he will kill anyone that tries to mess around with his woman.

When people ask me, how are you going to do that? I tell my daddy to send you to hell straight away,” the man of God said.