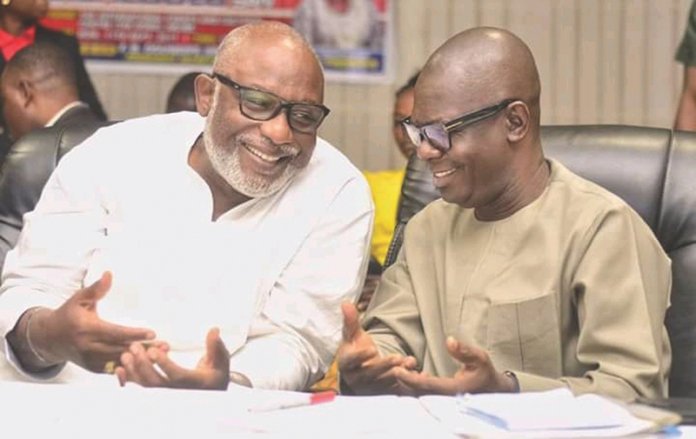 The crisis between the Ondo State Governor, Mr. Oluwarotimi Akeredolu and his deputy, Agboola Ajayi, has heightened political tension in the state, a situation reminiscent of the 1983 political crisis, writes James Sowole

To the people of Ondo State, the disagreement between the Governor, Oluwatotimi Akeredolu SAN and his deputy, Mr Agboola Ajayi, was not a new phenomenon in the political history of the Sunshine State. The current scenario between the two is the third of such happening in the state.

The first of such scenario and which was the most serious and most violent, was in 1983 between the first Executive Governor of the state, the late Chief Michael Adekunle Ajasin and the late Chief Akin Omoboriowo. The physical and emotional scars of the violent political crisis still exist in Akure, the state capital and among the indigenes of the old Ondo State.

The second scenario was between the immediate past Governor, Dr. Olusegun Mimiko and his deputy, Alhaji Ali Olanusi. The crisis between the two, who became friends in a manner unexpected of the chairman of a ruling political party surprised many people.

Olanusi, who was the Chairman of the then ruling Peoples Democratic Party (PDP), defected to the Labour Party (LP) nurtured and sponsored by Mimiko and was made the deputy governor as a compensation. The duo however parted ways midway into the second term tenure of Mimiko.
That things have fallen apart between the Ondo State Governor, Akeredolu and his deputy and ‘brother’ is no longer surprising to the people of the state but the concern of a majority is that it came in the same manner of the 1983 episode.

Considering the fact that Omoboriowo’s choice was made by the most respected political leader of the Southwest, the late Chief Obafemi Awolowo, no one could expect that the relationship between the two could go awry and generate to the level of a violence of that magnitude.
In the same manner, the choice of Ajayi as the running mate to Akeredolu, was to many people, accidental.

Ajayi’s name, according to findings, was submitted to beat the deadline set by the Independent National Electoral Commission (INEC) for political parties to submit names of their candidate and their running mate on a specific date whereas the Ondo State APC was yet to resolve issues concerning the filling of the position.
While the game of likely substitutes was ongoing, some people said Ajayi should not be chosen, because he was from Kiribo Town in Eseodo Local Government Area, whereas Akeredolu’s mother hailed from neighbouring Kiribo Town. They said chosen Ajayi would mean that Akeredolu has given the slot to his brother.

The expectation, therefore, was that the name would be substituted after the party must have resolved the issues concerning who should be running mate to Akeredolu. But it was gathered that for his political prowess, sagacity, financial and material contributions to the contest, Ajayi eventually became Akeredolu’s deputy.
Considering the circumstance under which Ajayi emerged as the running mate to Akeredolu and eventually the deputy governor, one would have expected that they should be able to work without rancour and if there is going to be any, it should be manageable.

The journey, which started on a very good note between the two brothers became stormy, when the deputy governor was said to have objected to the use of the money of the Ondo State Oil Producing Areas Development Commission (OSOPADEC) for the funding of projects like BEMORE, Forum of Wives of Ondo State and Women Political Office Holders (FOWOSO) initiated by Mrs. Betty Anyanwu-Akeredolu.

The cold war was heightened after the 2019 Presidential, National and State House of Assembly elections, when Ajayi was suspected to have influenced the choice of many candidates for the House of Assembly and who eventually won in their respective constituencies.

Ajayi also gained further influence among some politicians across party divides, because of the alleged failure of his boss (Akeredolu) to take good care of politicians including even those who are in government. He was said to have been nice to many of the aggrieved members and when it eventually became known to Ajayi that he would not be fielded for second term, many of them joined him in the face-off against his boss.

Also, Akeredolu’s inability to reconcile with APC leaders and members, who were aggrieved after the party’s 2016 primary and which gave birth to the Unity Forum with not less than seven aspirants and other aspirants eyeing the party’s ticket, had emboldened Ajayi that he could slug it out with Akeredolu.
While Ajayi was strategising for his next political move when the cold war was ongoing, the state government went all out against him as the Commissioner for Information, Mr. Donald Ojogo at every available opportunity, lambasted the deputy governor.

While speaking with journalists, Ojogo said Ajayi betrayed the trust and confidence reposed in him by Akeredolu, which might have been responsible for the cold war between them.
He said: “I can say that Mr. Governor in the history of Nigeria, Ondo State, in particular, is the only governor that entrusted so much power in his deputy much more than any other person. In the history of Nigeria, I can say that the Office of the Deputy Governor of Ondo State, I’m not talking about the personality but the office of the Deputy Governor became more powerful and more influential from 2017 till date under Akeredolu.

“And if there are issues the public sees in the realm of loss of confidence, distrust, and disappointment, culminating in a cold war, we need to know because since Akeredolu came on board, the office of the Deputy Governor became more powerful than it was, only betrayal of trust and confidence, could have been the reason they parted ways.”

At another forum after the deputy governor had defected to the PDP, Ojogo, when asked whether Akeredolu would hand over power to his deputy after he tested positive for COVID-19, declared that it would be dangerous for the state to do so.
“The Governor will not be advised to hand over to his deputy, it is not done, because there is no reason for that. The deputy governor has since left our party and has since left governance, even though he has not left government.

“I don’t know how we got into this. What we witnessed in 1983, the level of treachery that was deployed against the late Adekunle Ajasin, except for those who have the opportunity to witness what we are seeing in Ondo State, one may be tempted to say that was the height or nothing could surpass that level of treachery.

“But what we are seeing today represents the fact that what Omoboriowo did in 1983 was a child’s play compared to what Agboola Ajayi is doing now.

“We cannot risk it and attempt to hand over to someone who has exhibited mindless level of betrayal and an unquestionable level of treachery,” posited Ojogo, who hailed from the same Eseodo Local Government area.

That Ajayi, who had been cleared to contest the primary of the PDP ahead of the October 10, 2020 Election would not be allowed to remain in office, was a simple fact known to all politically conscious people of the state.
Therefore, the penultimate Tuesday’s move by the state House of Assembly to begin the process for his removal as the deputy governor, did not come as a surprise to the people of the state.

However, the unfolding drama that ensued indicated that the deputy governor had gone far in his plot to oust his boss. Only 14 out of the 26 members of the House signed the Notice of Removal from office against Ajayi while nine dissociated from the move, three others including the Speaker remained undecided.
The surprising aspect of the issue was the fact that the drama took place barely three weeks after 21 members of the house accompanied Akeredolu to Abuja, where he submitted his nomination form at the APC National Secretariat.

That the House could not muster two third majority at the commencement of the process to impeach the deputy governor, was likened to the 1983 scenario, when the late Ajasin could not get approval of the House twice in order to replace his deputy, who resigned to contest against him.

Though the two dramatis personae, have yet to secure the ticket of their different political parties, their crisis has heightened political tension in the state, with the attendant fear that the stage is gradually getting set for a repeat of the 1983 episode
Writing under the headline, “They sowed the wind and they shall reap the whirlwind”, an analyst, who pleaded anonymity, said the two were reaping what they sowed.
“In 2016, when Aketi and his deputy were preparing to take over the reign of government as the outcome of an election, they didn’t think of a better way to do this than to destabilise the outgoing government of Dr. Olusegun Mimiko.

“The arrowhead of the plan was no other than Agboola Ajayi. The first step was to ‘abduct’ the State Accountant General thereby stalling all financial transactions of government.
“Government was unable to meet its financial obligations to both public servants as well as the general public. The “abducted” officer resurfaced the following day Mimiko left office.

“From there, the arrowhead of the grand plan proceeded to the House of Assembly and turned the members against the outgoing government. All efforts made by Mimiko to present the state annual budget were thwarted by the manipulation of members. It is interesting to know that they are both now reaping the whirlwind of the wind they sowed three and a half years ago.”

Currently, the House of Assembly has been turned into a drama theater of impeachment imbroglio. The same Assembly they used as a destabilising weapon three and a half years ago has developed into a monster and making both of them to suck the sour grape they planted.

Today, the state has an APC governor and a PDP deputy. Unfortunately, it is the people of the state that are paying the price for this, though it’s technically the fallout of the “d’ibo k’o se’be”
But despite the tension, analysts believed that there might not be a repeat of the 1983 episode, even though people have lost confidence in politicians in terms of performances. It’s the belief of the people that things fell apart for the two brothers due to their selfish interests and that they were divided by the same thing that united them.