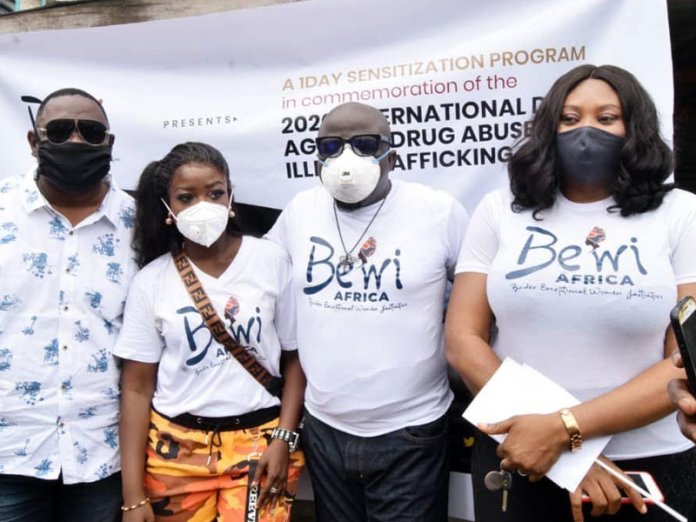 Determined to bring an end to drug abuse and illicit trafficking, a not-for-profit organisation, BewiAfrica has sensitised youths in Fadeyi and Ojuelegba areas of Lagos against the use of drugs and its devastating effects.

The maiden outreach, which had renowned comedian, Gbenga Adeyinka D first (GCON) as host, was tagged: ‘International Day against Drug Abuse and Illicit Trafficking’ and it is observed every June 26.

Speaking on this year’s theme: ‘Better Knowledge for Better Care’, the Founder, BewiAfrica, Ms. Florence Hungbo said understanding drug problem will in turn help for better knowledge on how to address the scourge.

She said: “We visited the youths and leaders in Fadeyi and Ojuelegba respectively with some entertainers and therapists to lecture the youths on the dangers of drug abuse on their health and future.

“It is imperative for BewiAfrica to carry out more awareness and outreaches in areas identified as having high cases of drug abuse.”

Representative of Transport Union in Fadeyi, Mr. Femi Akinboyeku condemned the use of drugs especially among youths and teenagers.

He said, “I neither smoke nor drink. Today, I have been able to achieve so much in my endeavour. If I was doing drugs, I would not have been anywhere near where I have reached in my profession.”

Speaking also, the Executive Vice Chairman, Somolu Local Government Council, Bowale Sosimi, commended BewiAfrica. He described the move as an exceptional cause, which he said was first of its kind for the youths of the area.