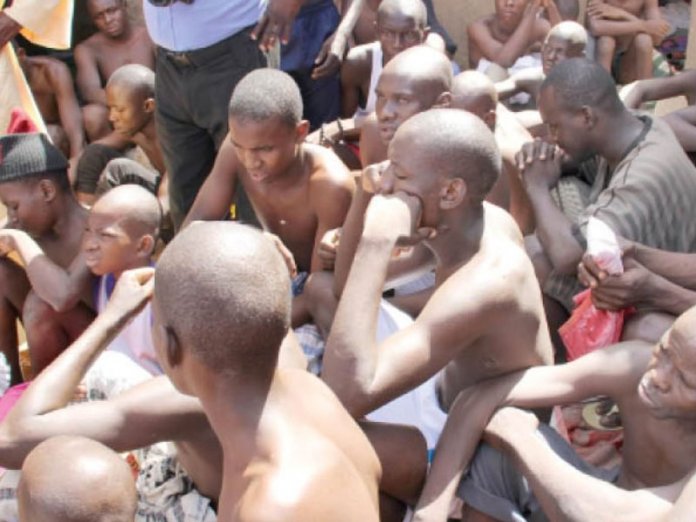 A total of 3,789 inmates have so far been released from the Nigeria Correctional Service Centres across the country since the outbreak of coronavirus in the country.

The move, according to the federal government, is targeted at reducing the risk of inmates contracting the virus.

The Attorney-General of the Federation (AGF) and Minister of Justice, Mr Abubakar Malami (SAN), made the disclosure on Tuesday at a press conference in Abuja.

The briefing was to mark the achievement of the Presidential Committee on Correctional Service Reform and Decongestion since it was inaugurated in October 2017.

Meanwhile, the committee, Malami said, has visited and appraised about 39 prisons in 18 states and has released a total of 7,813 since its inauguration.

The AGF, who noted that facilities in the nation’s correctional centres are overstretched, said that there is an ongoing construction of 3000-capacity maximum security custodial centres in Karshi, Abuja and in Janguza, Kano State.

”Undoubtedly, the Covid-19 pandemic has posed its own peculiar challenges in the light of the worrisome and dilapidated state of our correctional centres nationwide. Without belabouring the facts, it is pertinent to note the inadequacy of our correctional facilities, which are currently operating at more than 150 per cent of their capacity.

”As part of measures to decongest the custodial centres nationwide in the wake of the Covid-19 pandemic and the dangers posed to the centres, the AGF’s office, the Ministry of Interior in collaboration with the Presidential Committee on Correctional Service and Decongestion, the Presidential Advisory Committee on Prerogative of Mercy and State Executives and Other relevant stakeholders, were galvanised to develop measures to overcome the challenges”, the minister said.

He added that the initiative adopted, “have so far led to the release of about 3,789 inmates while simultaneously reducing the instances of unnecessary test and we intend to sustain this momentum”.

The Chairman of the committee and Chief Judge of the High Court of the Federal Capital Territory, Justice Ishaq Bello, said during the visits to the correctional centres nationwide, the committee carried out inspection exercises where a number of facilities were discovered to be in dire need of urgent rehabilitation and made recommendations as a matter of urgency to the relevant authorities for the renovation/construction of these facilities.

He said the committee, after a review of cases of inmates eligible for Prerogative of Mercy and condemned convicts on death row for over 10 years, has written and keeps writing letters of appeal to several state government executives to act on some special cases encountered during the visits to some states as well as to exercise their powers of clemency in deserving cases or commute to life sentence those condemned to death.