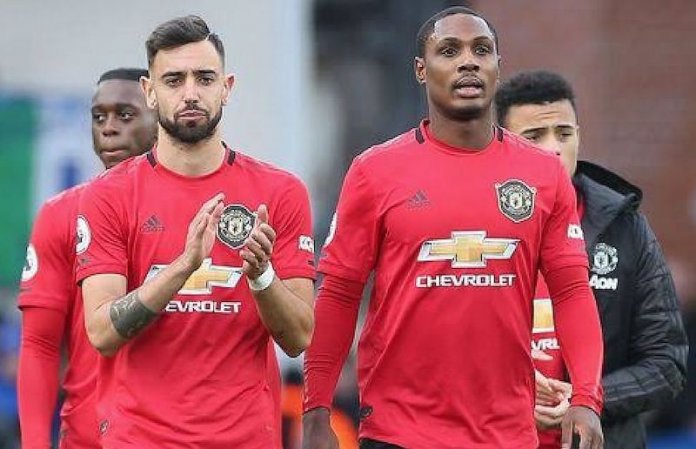 Portuguese star, Bruno Fernandes, has been voted winner of Manchester United’s Goal of the Month of June.

As reported by THISDAY last Friday, Fernandes’ second goal against Brighton was selected as the best United’s goal for the month of June to effectively dethrone Odion Ighalo who won it last in March before the lockdown due to the Covid-19 pandemic.

Football fans familiar with the Red Devils’ goals history tipped Fernandes’ volley against Brighton as the most likely winner despite sentiments favoring any of Anthony Martial’s first hat-trick goals for United.

Fernandes who joined the Old Trafford team from Sporting CP last January scored a brace in that victory over Brighton but it was the beauty of that second goal that stood him apart from the other nominees including Harry Maguire who scored the late 118th minute winner against Norwich to send the Red Devils to the semi final of the FA Cup; Anthony Martial’s hat trick goals against Sheffield United; Mason Greenwood’s strike against Brighton and Ighalo’s opening goal in that 2-1 FA Cup victory over Norwich.

Of the five goals scored by Ighalo since his January transfer deadline day loan switch to Old Trafford, it is worth bearing in mind that only two have not been shortlisted for the Goal of the Month – his strike against Club Brugge and one of his efforts in the win at Derby County.

The AFCON 2019 top scorer who has accumulated 13 appearances in a Manchester United shirt, won the Goal of the Month award for March 2020 for his effort against LASK in the Europa League.

That was United’s last game before the lockdown caused by the Covid-19 pandemic.

It is even icing on Ighalo’s cake getting into the main stream Manchester United’s starting line up given how several legends of the Red Devils thought Ole Gunnar Solskjaer made a mistake taking him in on loan from Chinese Super League club Shanghai Shenhua.

The Nigerian has since surpassed expectations to earn a loan extension till January 31 next year.