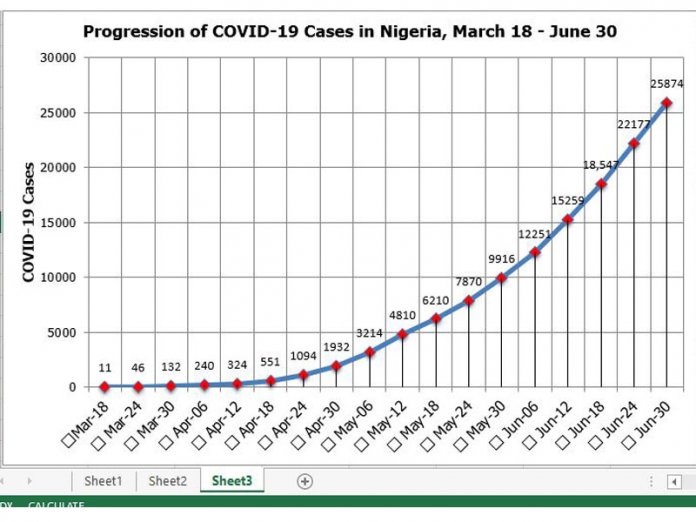 With the decision of the federal government to lift embargo on interstate transport services on Tuesday, Lagos, Abuja, Kano, Benin City and other major cities across the federation risk an unprecedented increase in the COVID-19 cases within a few weeks, THISDAY inquiries have revealed.

Findings further revealed that such state capital as Abeokuta, Asaba, Kaduna, Ibadan, Port Harcourt and Katsina, among others might also record significant progression in the COVID-19 cases before July 30 due to poor observance of social distancing in bus stops and motor parks nationwide.

Even though most of the commuters always wear facemasks, observation showed that poor infrastructure at bus stations and motor parks largely undermined the regulations mandating all citizens to wash their hands and use hand sanitizer in public places.

These shortcomings were uncovered during an observation of inter-state motor parks and bus stations, which THISDAY conducted between July 1 and 3 after the Presidential Task Force on COVID-19 (PTF) lifted prohibition on the inter-state transport services nationwide.

On March 30, the federal government imposed a two-week lockdown on the Federal Capital Territory (FCT), Lagos and Ogun States and extended it by another 14 days at the expiration of the first lockdown on April 13.

In a broadcast on April 27, President Muhammadu Buhari subsequently approved phased easing of the lockdown, which officially commended on May 4 and imposed curfew nationwide between 8:00 p.m. and 6:00 a.m.

Also, the president imposed a dusk to dawn curfew on the country; banned interstate movements and imposed total lockdown on Kano State due to an unprecedented spike in the COVID-19 cases and deaths the state recorded.

Since the gradual ease of the lockdown started on May 4, however, analysis of data obtained from the website of the NCDC showed that the COVID-19 cases rose from 2,818 on May 4 when the partial ease of lockdown commenced to 10, 262 on May 31, representing an increase of 264 percent within four weeks.

From 10,599 on June 1 when the second phase of the eased lockdown was announced, NCDC’s data revealed that the COVID cases surged to 25, 872 on June 30 when the PTF lifted prohibition on the inter-state lockdown.

Between June 1 and 30, according to NCDC’s data, the progression of the COVID-19 cases across the federation increased by 144 percent, suggesting that with the resumption of inter-state transport services, the cases of the pandemic might triple or quadruple in the next four weeks.

However, as NCDC’s data showed, the COVID-19 cases were 132 on March 30 when the first lockdown was announced and increased to 1353 on April 27 when the federal government reeled out the guidelines for the phased ease of the lockdown across the federation.

Contingent upon NCDC’s statistics on the pandemic, THISDAY inquiries revealed that precisely before July 31, COVID-19 cases might triple or quadruple in major cities and capitals nationwide due to poor observance of social distancing in bus stops, bus stations and motor parks.

Complicated by the absence of modern bus terminals and the prevalence of poor facilities, THISDAY observed that most public transport facilities could not effectively enforce COVID-19 regulations, requiring the use of hand sanitizers, facemasks and nose covers in public spaces

Findings further showed that frontline cities – Abuja, Abeokuta, Akure, Ibadan, Lagos, Kano, Benin City, Kaduna, Port Harcourt and Katsina, among others, may witness an unprecedented spike in the progression of COVID-19 cases with the resumption of the inter-state travels.

In most of these cities, it was observed, public transport infrastructure that could make social distancing possible was practically non-existent in the case of Abeokuta, Akure, Ibadan and Kano, and largely inadequate with respect to Lagos, Abuja, Benin City and Port Harcourt.

In virtually all inter-state bus stations and motor parks in Abuja, Benin City, and Port-Harcourt, THISDAY observed high human contacts with commuters trooping in from different places to board vehicles to their destinations.

Apart from archaic public transport infrastructure, further observation revealed that there was no strategy in place in most bus stations and motor parks to effectively manage commuters and strictly enforce social distancing within the facilities.

In Lagos State, for instance, THISDAY observed some ultramodern public transport infrastructure, especially bus stations and bus stops in different parts of Africa’s most populous city, some of which were developed under the last administration.

Obviously, THISDAY findings showed that the state authorities could effectively enforce social distancing and COVID-19 regulations in all these bus stations due to facilities already put in place to facilitate hitch-free transit.

With the exception of Ojodu-Berger Bus Terminal, Oshodi Transport Interchange and Race Cross Bus Terminal, THISDAY observed that other ultramodern bus stations in Lagos had not been fully open for bus operations and services.

At Oshodi Transport Interchange, THISDAY observed strict compliance with the COVID-19 regulations with demarcated spaces for commuters to queue, provision of hand sanitizer, mandatory use of facemasks or nose covers as well as a section curved out for hand washing.

Apart from these inter-state public transport facilities, however, THISDAY observed that nearly all intra-state motor parks in the state lacked basic infrastructure to enforce social distancing and ensure outright observance of COVID-19 regulations.

Ibadan, currently with a population of about 3.552 million, does not have standard bus stations, bus stops and motor parks where social distancing could be observed or that could give room for the enforcement of COVID-19 regulations.

THISDAY observation, however, showed that the Oyo State Government had started implementing an intelligent transport system entailing the construction of two ultra-modern bus terminals in Iwo Road, one in Challenge and another bus terminus in Ojoo carefully designed to serve commuters.

With its design, it was observed, the state’s new public transport plan is a miniature of what the last administration implemented in Lagos with the development of strategic public transport infrastructure in Race Cross, Ikeja, Oshodi, Ojota-Berger, Yaba, Maryland and Oyingbo, among others.

Perhaps with the exception of Lagos and recent development in Ibadan, Oyo State, Adepoju observed that nearly all capitals in the country lacked public transport facilities that could support the enforcement of COVID-19 regulations and the maintenance of social distancing.

With the archaic public transport infrastructure, he warned that the progression of COVID-19 cases might overwhelm public health facilities in a few weeks with the decision of the federal government to end inter-state lockdown.