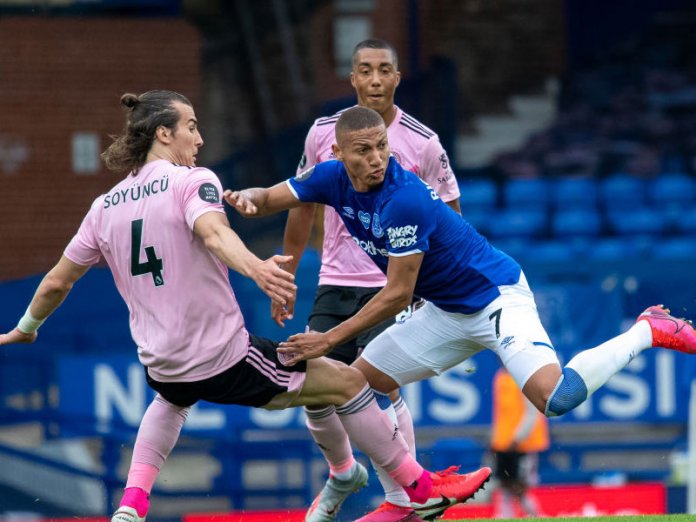 Both Wilfred Ndidi and Kelechi Iheanacho were involved in Leicester City’s 2-1 defeat at Everton’s Goodison Park last night as the Foxes dream of a Top Four finish of the English topflight and a ticket to the lucrative UEFA Champions League is slipping away.

Everton who are pushing for a place in next season’s Europa League have remained unbeaten since the restart.

Their victory last night over Leicester is a second successive win coming courtesy of two goals in quick succession in the game’s first quarter.

Leicester rallied at the start of the second half and pulled a somewhat fortuitous goal back when Mason Holgate’s attempted clearance flew into the net off the face of substitute Kelechi Iheanacho.

But they were unable to make the most of the larger share of possession and chances to gain parity.

It was another blow for the Foxes, who exited the FA Cup at the hands of Chelseaat the weekend and now face a real test to hang on to their top-four spot in the table.

Two points from their past three games has opened the door to Manchester United and Wolves, both of whom are only three points behind Leicester and in much better form.

Everton, though, are looking up the table, with this win leaving them one point behind eighth-place Tottenham – a position that could be good enough to secure a European spot for next season.

Richarlison limped from the field in the second half following a challenge by Ndidi, although manager Carlo Ancelotti eased fears after the game by stating the Brazilian should be fit to face Tottenham in five days time.

Earlier, a howler by goalkeeper Tim Krul helped set Arsenal on their way to a 4-1 win that lifts them up to seventh as bottom club Norwich City’s hopes of staying in the Premier League faded further.

Dutchman Krul lost possession to Pierre-Emerick Aubameyang on the edge of his own penalty area for Arsenal’s opener, the Gabon forward whipping the ball from his feet to score his 18th top-flight goal of the season. And also scored a second in the Gunners win.