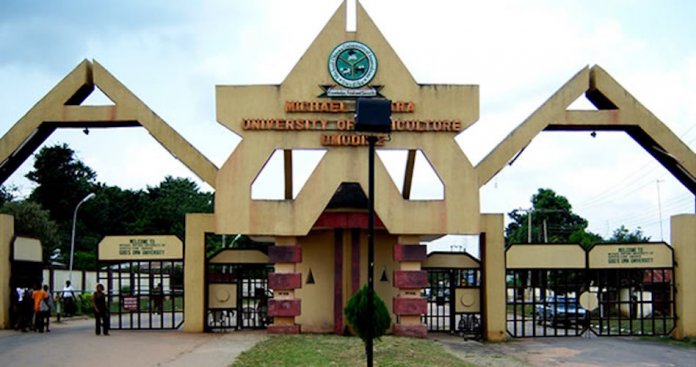 All is not presently well at the Michael Okpara University of Agriculture, Umudike (MOUAU) as members of the Academic Staff Union of Universities (ASUU) of the institution have decried the non-payment of five months’ salary arrears.

They, however, accused the Vice Chancellor of the school, Prof Francis Otunta, and the Bursar, Mr. Joseph Kalu Okorie, of complicity over the delay.

Reviewing the cause of the delay even as lecturers in other universities had since received their February to May salary arrears in compliance to President Muhammadu Buhari’s directives, ASUU in the university sent a delegation to the vice chancellor and Pro-Chancellor/Chairman of the Governing Council, Hon. Lawal Zayyana, to investigate the delay in the payment of their five months’ salary arrears.

President Buhari had given directives to all federal universities to pay all ASUU members who did not enroll in the Integrated Payroll and Personnel Information System (IPPIS).

They also resolved to pass a vote of no confidence on the vice chancellor and the bursar for not being proactive in ensuring that the federal government directive was strictly adhered to even when all other federal universities have complied fully with exception of MOUAU.

THISDAY can authoritatively confirm that ASUU attributed their fate to an internal problem, which can only be resolved by the vice chancellor and that of the bursar.

Some of the lecturers, who spoke to THISDAY on condition of anonymity, wondered how other federal universities who have the same problem with MOUAU could have received their salaries leaving them behind, not minding what they had passed through within the three months of lockdown occasioned by COVID-19 pandemic.

Efforts made by THISDAY to reach the vice chancellor and the ASUU Chairperson of the institution, Prof. (Mrs.) Echendu, proved abortive as their phone numbers could not go through.