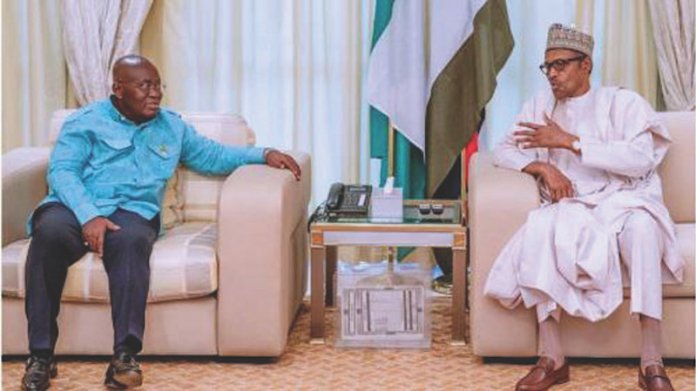 The main lesson from the recent demolition of a building at the Nigerian High Commission in Ghana is that government has to do more to protect the nation’s integrity everywhere. Shola Oyeyipo writes

Ordinarily, the reaction from the Ghanaian government over the controversial demolition of a building in the premises of the Nigerian High Commission in Accra, Ghana, has been largely remorseful, but concerned Nigerians have not stopped talking about how disappointed they’ve been.

Ghana’s President, Nana Akufo-Addo, apologised to Nigeria, while the Minister of Foreign Affairs and Regional Integration, Shirley Ayorkor Botchwey, assured Nigerians that the government would rebuild the demolished structure. The country’s police, however, capped it up, when they said two persons in connection with the demolition had been arrested and were to be arraigned before a court.

Good as that may sound, the deed had been done and the country’s image, battered as well.
However, one question agitating the minds of Nigerians is that despite claims that the Ghanaian government was not behind the unlawful act under the cover of darkness on June 19, why was it done without a formal notice to the occupants in the first place? Why were Ghana’s police present at the scene but unable to ensure that the building was not pulled down, at least, there was a diplomatic relationship that ought to have been respected?

Nigeria’s main opposition party, the Peoples Democratic Party (PDP) had quickly pointed fingers at the President Muhammadu Buhari-led All Progressives Congress (APC) leadership, describing the development as a reflection of government’s incompetence. Many commentators did not agree less.

The PDP, through its National Publicity Secretary, Kola Ologbondiyan, said Buhari didn’t explore available diplomatic channels to save the country the embarrassment that arose from the ‘Ghana demolition.’
Describing the development as a “huge contempt”, the PDP noted: “Attacks on Nigerians and Nigerian interests in foreign lands had escalated under the Buhari administration, with Nigerians being harassed and killed in various parts of the world by assailants, who take advantage of the incompetence and weaknesses of the current government in Nigeria.”

Though as expected, the government has its own side of the story and has made strong statements to that effect. Government officials had also demanded answers from the Ghanaian authorities but some knotty issues have yet to be explained in a way that Nigerians, especially, those resident in Ghana, are adequately informed about the issues.

Nigeria has had a diplomatic spat with Ghana over the years. Officials from both countries’ Immigration Service had been up against each other until recently, when there were reconciliatory talks. The Nigerian immigration reportedly deported four Ghanaians in what was considered a retaliatory action over the deportation of 723 Nigerians from Ghana between 2018 and February 2019.

This simply meant there had been a strain in the relationship between the two countries and this played out in the manner the diplomatic residence was demolished.
About five months ago, there were reports and denial that the Nigerian High Commission in Ghana was evicted. Then the Ministry of Foreign Affairs confirmed that its lease of the property had expired and that they were looking for ways to renew it. It is not clear whether they did or not, but, in an embarrassing fit, the building was pulled down irreverent Ghanaians.

Whatever explanations the Nigerian government may have for this, the Buhari administration should consider answering these questions: could this have happened to the USA, Britain, China, Germany, France and other first world nations? Why is Nigeria and Nigerians increasingly becoming target of attacks in Africa? This how the country would continue to watch its citizens ridiculed by other countries?

Agreeably, it’s an international affair and some high-level diplomacy is required, even at that, there must be a minimum level of tolerance for insults from other nations, especially Nigeria’s African neighbours. There must be sanctions against these subtle humiliations often targeted at inflicting pains on Nigerians – like the South African xenophobic attacks.
Nigeria’s former Minister of Aviation, Mr. Femi Fani-Kayode, in a tweet that generated a lot of reactions among Nigerians, bemoaned that Nigerian traders in Ghana have had their shops forcefully shut for the last eight months following which the Embassy was demolished and embassy staff threatened with violence.

“I assure you that Ghana would not try this if Nigeria had a president or if OBJ (former President Olusegun Obasanjo) or Abacha (former military leader, late General Sani Abacha) were in power,” he said.
It’s on record that more than any other leaders in history, these two men put Nigeria first in their foreign affair policies, notwithstanding the misgivings about them.

There are so many areas the Buhari administration is expected to bring about the change it promised but considering the way and manner the country is being humiliated abroad, it is high time the government stepped up its game. But more need to be done to show that even if our citizens traverse the world, they will not be abandoned at the mercy of irrational aggressors.