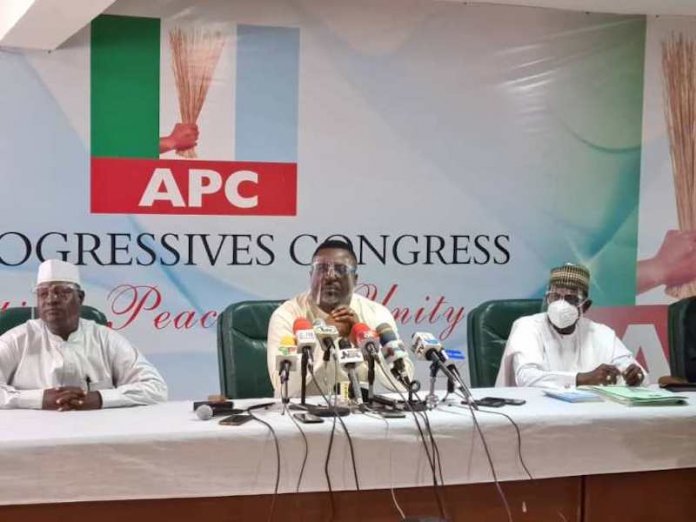 The gladiators in the crisis rocking the All Progressives Congress (APC) locked horns yesterday over plans to convene a meeting of the National Executive Committee (NEC) of the party to restore peace and order in the ruling party.

Earlier, the factional acting National Chairman of the party, Mr. Victor Giadom, had issued a notice of the meeting, which he said he did with the consent of President Muhammadu Buhari.

The meeting is billed to hold tomorrow at the State House, Abuja.
But the party’s National Working Committee (NWC) faulted his decision, saying as a suspended member of the party, he lacks the power to convene the NEC meeting.

Also, Minister of Transportation, Hon Chibuike Amaechi, has waded into the crisis in the Rivers State chapter of the party, especially in the wake of threats by his supporters to unleash violence on the state.

He cautioned his supporters and Rivers people to steer clear of violence as that is not the best way to resolve any issue.
Giadom, in a statement yesterday, said: “I, Chief Victor Giadom, having been duly authorised by court order to act as national chairman of our great party and to preside over all meetings of the NWC and NEC, hereby and with the consent of the President Muhammadu Buhari (who is the leader of our party), reconvene the NEC meeting that was earlier billed to hold on March 17, 2020, but was postponed.
“The reconvened meeting shall hold on Thursday, June 25, 2020. Venue shall be the State House, Abuja.

“However, in keeping strictly to the COVID-19 guidelines, the postponed NEC shall proceed by virtual means. The codes would be sent by text to the phone numbers of all NEC members. Those to be physically present at the State House, Abuja, would also be communicated.”
But in a swift reaction, another acting National Chairman of the party, Mr. Hilliard Eta, said Giadom had no locus standi to convene the NEC meeting.

Eta, while responding to a question after the meeting of the NWC of the party, said Giadom had been suspended by a competent court of law.
He cited Article 25B (i and ii) of the APC Constitution (2014 as amended) which states that: “The National Executive Committee shall meet every quarter and/or at any time decided by the national chairman or at the request made in writing by at least two-thirds of the members of the National Executive Committee provided that not less than 14 days’ notice is given for the meeting to be summoned.

“Without prejudice to Article 25(B)(i) of this Constitution, the National Working Committee may summon an emergency National Executive Committee meeting at any time, provided that at least seven days’ notice of the meeting shall be given to all those entitled to attend.”
Eta stated that Giadom was no longer a member of the NWC and has been suspended as a member of the party.
He said: “It is not right to refer to 17 members, with 15 of them physically present and two who met with us physically as a faction. This is the National Working Committee NWC of the APC in Nigeria.

“I sit here on behalf of Senator Abiola Ajimobi as the acting chairman of this party. If Victor Giadom is arranging a NEC, I believe that it is your responsibility as a member of the fourth estate of the realm to investigate his locus to find out whether he has the legal, the constitutional backing to be able to call a NEC meeting.

Eta noted that the party secretariat, which was sealed earlier yesterday by the Inspector General of Police, Mr. Mohammed Adamu, but reopened some hours later, has not become a battle ground.
He added that many people view disagreement and bickering in political parties as if it is war, but it is not.

Eta explained that the NWC was in receipt of communication from the Edo State chapter of the party over the suspension of APC National Chairman, Adams Oshiomhole, affirmed by the Court of Appeal on June 16.
He added that the communication came from both Ward 10 Etsako West Local Government and the Etsako West Local Government chapters of the party.
“We acknowledged the reciept of same and accepted the lifting of that suspension,” he stated.

The members of the NWC were earlier yesterday denied access to the party secretariat by policemen believed to be acting on the order of Adamu.
The police, however, later allowed the APC members and staff access to the facility to conduct their business.
While the NWC members were prevented from gaining access to the party secretariat, the staff of the party were allowed inside the facility.
Journalists covering the party who were initially denied access were also subsequently allowed.
A team of policemen arrived at the secretariat at 10.50a.m and blocked the entrance with a vehicle to prevent vehicles from gaining access into the premises.

But the acting National Secretary of the party, Mr. Waziri Bulama, who arrived at about 12.25 p.m was allowed access to the secretariat.
Force Public Relations Officer, DCP Frank Mba, said in a statement that the police deployed personnel in the party’s secretariat to ensure there was no breakdown of law and order following the rancour between the two factions of the party.
According to Mba, the presence of police personnel at the secretariat was not to seal off the place but to prevent any clash between the contending factions.

Minister of Transportation, Hon Chibuike Amaechi has cautioned his supporters and Rivers people to steer clear of violence as that is not the best way to resolve any issue.
Amaechi was reacting to two viral videos of his alleged supporters in the state with one group inciting violence and the other dissociating him from the comments of the first group stating that he is a man of peace.

He addressed the issue during a TV interview yesterday, stating that the rule of law must be respected and upheld at all times.
He said: “First, if you say you’re my supporter, you’ll know that I don’t just respect the law, I fear the law. Breaking the law can put you in jail. Because of the kind of words used in that video, I may have to address it.

“I believe that no matter how angry you are, no matter how institutions are manipulated, a judge once said ‘I’m allowed to be wrong, that’s why you have the Court of Appeal, that’s why you have the Supreme Court.’ So if you think that what the state judiciary is doing is wrong, then you go to the Court of Appeal, you go to the Supreme Court and ensure you exhaust the due process. No matter your frustration, you don’t have the right to take the law into your hands.”

Asked about the crises in his party at both national and state levels, Amaechi said: “What is happening in APC, I don’t know, what is happening in Rivers State, I don’t know. What I’ve done is to keep away from politics, even if I’m bothered, it’ll be internally. There’s nobody there (in the party) who is a child, we’re all adults. I don’t want to get involved in the politics.

“Nigerians know me for being blunt and honest. Some see it as arrogance, some see it as being brash, whatever it is. What do I need to say that I have not said before? It’s internal dynamics of politics, it’s internal struggle. So, I have said it several times, when we fought in 2015, I said this country cannot continue the way it is going. I’m not helpless, but I’m doing what they call ‘sidon look’.
“Why I’m responding to those videos is because they all said they are my supporters; those who made the comment and those who countered them. My message to everyone is to tell everybody who is supporting me to please remain calm and get out of violence. Never be part of violence because I will not defend anybody when you get violent. The law will take its course.

“Whatever is happening, if anything goes wrong in the high court, you go to the Court of Appeal; if anything goes wrong in the Court of Appeal, you go to the Supreme Court. But don’t you ever take the law into your hands, just like my children would never do that. My kids and my brothers know that I’m not a man who will come out to subvert the law. So I will not come and help you, if you’re my brother or my son, and you take the law into your hands.”