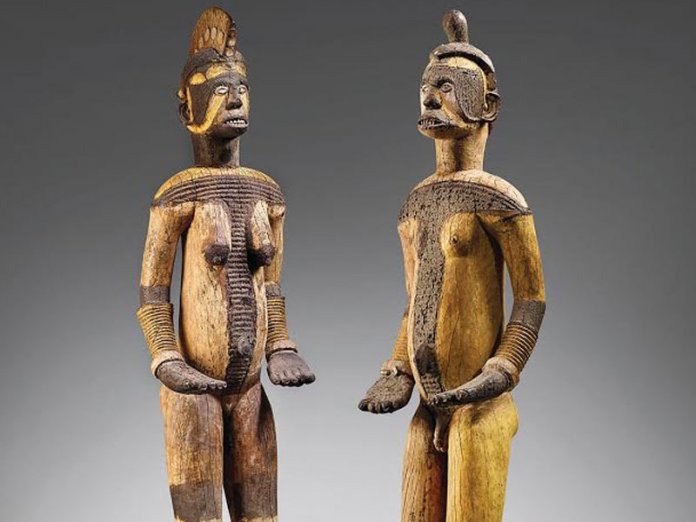 A planned auction of two sacred Igbo objects alongside others at the Paris salesroom of the British auction house Christie’s sets it on a collision course with the Nigerian authorities and the country’s intelligentsia in the Diaspora. Okechukwu Uwaezuoke reports

They are simply identified as “Paire de Statues Igbo…” (A Couple of Igbo Figures) and are positioned as Lot 47 in the auction’s catalogue. These figures bear scarification markings – known as “ichi” and “mbubu” – on the forehead, chest and stomach and their wealth, high status and titles are further italicised by their anklets and bracelets. They stand 161 cm and 166 cm tall with their palms turned up as though in supplication.

Meanwhile, their unscrupulous provenance is already stirring a storm of controversy. Nigerian-born Chika Okeke-Agulu, an art historian and professor at Princeton University in the US, likened them to “blood art” because the late French collector, Jacques Kerchache, to whom they were attributed, had expropriated them from the Nri-Awka area during the Nigerian civil war.

“Dear Christie’s, let’s be clear about the provenance of these sculptures you want to sell,” Okeke-Agulu wrote in an Instagram post. “While between 500,000 and three million civilians, including babies like me, were dying of kwashiorkor and starvation inside Biafra; and while young French doctors were in the war zone, establishing what we now know as Doctors Without Borders, their compatriot, Mr Kerchache, went there to buy up my people’s cultural heritage, including the two sculptures you are now offering for sale. I write this so no one, including Christie’s and any potential buyer of these loots from Biafra, can claim ignorance of their true provenance. These artworks are stained with the blood of Biafra’s children.”
Previously, he had in a 2017 op-ed article in the New York Times, decried the “widespread looting of art from Eastern Nigeria during the Biafran War (1967-70)”, recalling in that article how his mother, on leafing through a catalogue of Igbo sculptures now in European collections, “still mourns the overnight disappearance of countless alusi (sacred sculptures) from communal shrines in my hometown, Umuoji, in Anambra State” and the end of the festivals associated with them.

“These art raids from all indications were sponsored by dealers and their client collectors mostly based in Europe and the US,” he further alleged in the Instagram post that bore the hashtags #christies #warloots and #biafranwar. “It turns out that later this month the venerable Christie’s will auction two of these impressive ‘alusi’ figures said to have been acquired in 1968-69 in situ by Jacques Kerchache (1942-2001). That is, Mr Kerchache acquired these sculptures in the Nri-Awka area (a half-hour drive from my hometown) during the darkest years of the Biafran War.”

Whether or not Christie’s would cave in under the mounting pressure from concerned quarters – mainly from the Nigerian Information, Culture and Tourism Ministry through its agencies, the National Commission for Museums and Monuments (NCMM) and the National Council for Arts and Culture (NCAC) as well as from the Diaspora-based Nigerian intelligentsia – is yet to be seen.

A letter from the NCMM, signed by the Director (Overseeing the Office of the DG) Aliyu L. Abdu, requests in clear terms that Christie’s “suspend the auction” of five of the lots featuring in the June 29 auction, which have been identified as coming from Nigeria. The Igbo couple figures from Nri-Awka (lot 47) was listed alongside four other works, namely: an Edo hip mask from Benin (lot 29), an Edo bronze plaque (lot 30), a Boki headdress (lot 31) and an Urhobo figure (lot 49).

The NCMM’s call for the suspension of the auction of these works is premised on the fact that both “their provenance and their mode of acquisition” were yet to be established. The agency – in the letter addressed to Christie’s Head of Sale, African and Oceanic Art Department and copied to its European Head of the African and Oceanic Art Department – further highlights its suspicions that the works “belong to a class of antiquities”, whose exchange or transfer Nigeria will object to.

Still on the objects, the NCAC Director-General Otunba Olusegun Runsewe described them, in a telephone interview with THISDAY, as “assets of Nigeria”, adding: “we must do everything, with the cooperation of all stakeholders, to retrieve them.”

Ratcheting up the pressure on Christie’s a notch higher, Sylvester Ogbechie, another Nigerian-American art historian, accused Christie’s of “aiding and abetting collectors in selling pieces of their contested collections.” In a recent post, published in his aachronym.blogspot.com, the University of California, Santa Barbara professor of the history of art and architecture accuses the auction house of “putting up for sale African artworks that are clearly major items in the restitution debate, such as Benin bronzes. These activities are meant to undermine the ongoing discussions about returning African artworks to their countries of origin.”

Only a decade ago, he had similarly called out Southeby’s, another British auction house, for a related transgression. “In a decade of important developments in the cultural patrimony restitution debate, we can see that the mindset of these auction houses has not changed,” he laments. “We need to more forcefully state that by their actions, these auction houses are basically serving as fences for stolen goods. This is blatant criminality.”

Already, a petition, titled “Stop Christie’s from Selling STOLEN Igbo Sculptures”, is trending on Change.org. “As the world awakens to the reality of systemic racial injustice and inequality, thanks to the #BlackLivesMatter movement, we must not forget that it is not just the black body, but also black culture, identity and especially art that is being misappropriated,” the initiator of the petition (simply identified as Uzo. O.) states. As of Thursday, June 18 afternoon,765 people out of the target 1,000 have signed the petition, as the outrage against the planned auction continued to swell.

Meanwhile, Christie’s had at the time of filing this report neither responded to email enquiries from THISDAY nor made known its intention to suspend the planned auction of the works. Nonetheless, Okeke-Agulu affirmed, in a telephone conversation with THISDAY, that there was time enough to compel Christie’s to rescind their decision to auction the controversial works, premising it on the belief that the auction house cares enough about how it is perceived by the public. Besides, the protests and petitions, it is hoped, would make these objects “toxic enough” to dissuade potential collectors from wanting to acquire them.

Curiously, Christie’s body language suggests insensitivity to the ongoing restitution debate aimed at retrieving stolen African artworks. Assumptions in some quarters that a French government-commissioned 2019 high-profile report by Senegalese writer and economist Felwine Sarr and French historian Bénédicte Savoy would make auctioning of such art objects unattractive has been proven wrong. It was indeed on this report that the French President Emmanuel Macron based his famous pledge to the effect that France would strive to return the looted objects from Africa within five years. Macron had, in 2017, told students in Burkina Faso: “Africa’s heritage must be showcased in Paris—but also in Dakar, in Lagos, in Cotonou. This will be one of my priorities. Starting today, and over the next five years, I want to move toward allowing for the temporary or definitive restitution of African cultural heritage to Africa.”

Granted that little or no concrete action might have been taken towards the realisation of Macron’s promises, holding an auction of some of these looted objects in the French capital is nothing short of a nose-thumbing gesture at those clamouring for their return.

While sceptics cite lack of necessary infrastructure to house the objects, if and when they are eventually returned, activists like Ogbechie and Okeke-Agulu counter with the call to first establish their ownership. “We need a discourse that recognises African ownership of the intellectual property rights of its cultural patrimony and devise means for the continent to benefit from the value such cultural patrimony generates,” Ogbechie had told the audience at a lecture he delivered last year at the Centre for Contemporary Art, Lagos.

Arguing that cultural objects are cultural properties, Okeke-Agulu said in his interview with THISDAY that “Nigeria does not need to have a brand new museum right away before it can broach the ownership of these objects.”

Beyond the clamour for the return of these African cultural objects domiciled outside the continent, scholars like Ogbechie are concerned that they often subjected to different display protocols than were originally intended for them. A research finding, published by the Smithsonian Museum of African Art on the “alusi” figures, corroborates this fact. According to the research, the “alusi” figures would normally be in a compound that would include 25 others that represent the Igbo world view of the importance of family. “The ‘alusi’ figures would have been used as the centre of weekly and yearly activities, such as parades and other gatherings in which the Igbo come together,” the report published in its website and credited to Ashley Auclair, also says.

Meanwhile, the raging controversy continues to muddy the waters for the June 29 auction. And Christie’s is currently being confronted with the time-honoured question: to be or not to be?