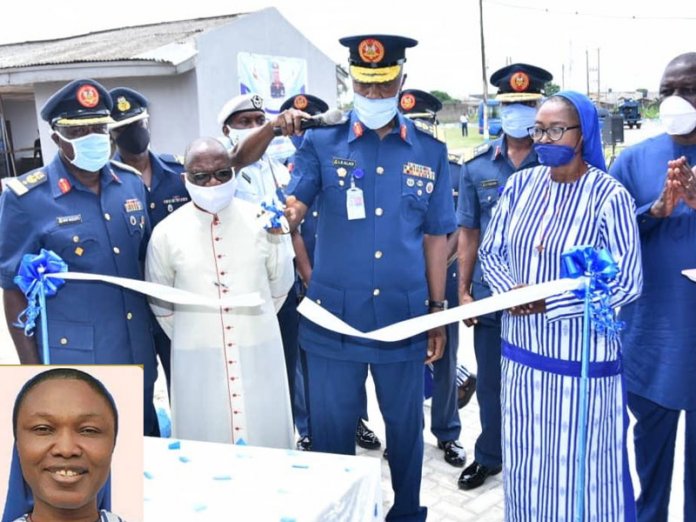 Chiemelie Ezeobi writes on the notable gesture by the Chief of Air Staff, Air Marshal Sadique Abubakar, who recently dedicated a cenotaph and a building to the memory of a sacrificial nun, the Principal of Bethlehem College, Abule-Ado suburb in Lagos, Late Sister Henrietta Ebosiogwe Alokha, who while ensuring her students escaped to safety during the March 15, 2020 deadly explosion that claimed 23 lives, injured 25 and destroyed over 300 houses, paid the ultimate price with her life

For the late Principal of Bethlehem College, Abule-Ado, Sister Henrietta Ebosiogwe Alokha, her  favourite saying was “anything worth doing is worth well”. This creed was what she lived by even until death.

That fateful day, nothing gave the residents of Abule-Ado in Amuwo Odofin Local Government area of Lagos State an inkling that their world as they knew it was about to crumble like a pack of badly stacked cards. Some were on their way to church, some were already in church and others at home when the loud explosion occurred at about 9am.

The explosion tore down houses, destroyed cars and even killed 23 people including a family of four, a newly married couple and a pregnant woman. The explosion which was heard as far as Agege, Yaba, Ejigbo and even Okota, was first thought to be bomb blast, gas explosion and then pipeline explosion.

When the explosion occurred, bedlam ensued and the first thought of almost everyone was to run to safety; everyone but the deceased. She had the opportunity to run but she did not. She made sure all her students were evacuated to safety and none of them lost their lives, but in her bravery, she paid the ultimate price.

In recognition of the supreme sacrifice she paid, the Nigerian Air Force (NAF) recently named a newly built 500-capacity assembly hall after the deceased. The service also built a cenotaph for her by the entrance to the hall located at the 041 NAF Communications Depot, Shasha, Lagos.

The idea which was floated by the Chief of Air Staff (CAS), Air Marshal Sadique Abubakar, was because the deceased was found worthy of celebration over her selfless nature as she exemplified the ‘Good Shepherd’ who put the protection and safety of her flocks well above hers.

Unveiling the cenotaph and the name, CAS said a hall in a school where character was moulded deserved to be named after a worthy Nigerian who has distinguished herself in the service to humanity.

CAS who was represented by the Air Officer Commanding (AOC) Logistics Command, Air Vice Marshal (AVM) Lawal Alao said Alokha’s bravery that day saw that no student of the school died in the disaster, adding that she ensured they were all saved but her.

He said: “I am hopeful that naming this assembly hall after Rev.Sr. Henrietta Alokha will not only be symbolic but will continually keep her memory fresh in our hearts. I am convinced that the stories of her heroic act that day will continue to remind our younger ones the values of selfless service to humanity. The sacrifice should also serve as motivation for Airmen and Air Women of the NAF who are presently deployed to various theatre of operations in our country.”

In his welcome address, the Commander 041 Communications Depot Shasha, Air Commodore Nkem Aguiyi, noted that there were similarities between Bethlehem Girls’ College and AFSS, Shasha.

“They are both institutions growing future generations and should therefore serve as repositories of the intrinsic qualities demonstrated by Sister Alokha. Her name deserves a place in the sands of time as she chose to put humanity before self”, he said.

He pointed out that one of key drivers of CAS’ Vision, which is to “promote and inculcate the core values of integrity, excellence and service delivery”, closely aligns with Rev Sister Alokha’s actions.

Appreciating the NAF for the gesture, Sr. Rowland hoped that her death would be a lesson for leaders to be ready to make sacrifices for the led, adding

that the Catholic Church in Nigeria has set up an endowment fund in the deceased’s honour called the Sr. Henrietta Alokha Endowment Fund to be made available for indigent children between the ages of six and 17, who are very intelligent but cannot fund their education due to financial constraints.

Disclosing that the Catholic Church in Nigeria has set up an endowment fund in the deceased’s honour she said: “It is called the Sr. Henrietta Alokha Endowment Fund. This fund is to be made available for indigent children between the ages of six and 17, who are very intelligent but cannot fund their education due to financial constraints. This is just the first step the church is taking. We are planning to do more things to immortalise Sr. Henrietta Alokha.”

Messenger Oduntan described Sr. Alokha as a quiet but forthright woman who loved those who were under her care and paid the most precious price for them, adding that one could only buy imagine the number of mothers that would have been weeping for their children but instead of them weeping, she volunteered her life as the school was razed down.

Earlier on, one of the sisters in SSH eulogised the deceased in a moving tribute. According to her, the deceased displayed exemplary behaviour as she  exhibited selflessness and was never swayed by material things.

She said: “Bethlehem Girls College was made up of students from all ethnic groups in the country. For each of these students, Sister gave her life. She was an emblem of love, unity and peace. Therefore, the best way to keep her legacy alive is for all to work for sacrificial love, peace, and unity. Sister lived a happy and fulfilled religious life.

“A life of love and dedicated service to God and humanity in the helm of education, within her religious institute and in the church. She was very simple and humble. She was a role model per excellence because she believed in excellence. Her slogan is ‘Anything worth doing is worth doing well‘.“

On her love for children which saw her give her life she said, “She loved children as well as her profession as a teacher. That may explain why she went back to look for the two lost sheep of hers even after she was already saved in the first instance.

“Sr. Henrietta was not a mere hireling. She loved and had passion for her students whom she took as her own children. That was why even though she had the opportunity to run and leave the children under her care, she did not because like the Good Shepherd, she was concerned about them. She paid the ultimate prize by giving up her life. “

But who was Late Rev Sr. Henrietta Alokha? She was many things to different people; a sister, daughter, friend, administrator, spiritual leader  and counselor.

Born in Agenebode In Emko East Local Govemment Area of Edo State on May 11, 1967 to Late Chief Vincent Dodah Alokha and Late Mrs. Julianne Alokha, she was the fourth of six children.

Having grown up in an environment rooted in discipline, respect and strong Catholic faith, towards the end of her secondary school education, she expressed interest in becoming a nun and commenced her religious vocation in the Congregation of the Sisters of the Sacred Heart of Jesus (SSH) on November 17, 1983 as a Postulant.

Having expressed the desire to continue In the religious life, she was received into the Novitiate on April 13, 1985 and on August 23, 1987, she made her Profession of Temporary Vows at the Sacred Heart Navittate Chapel, Atani-Uromi, Ede.  Right after her profession, she was assigned to teach at the Brother Pius Nursery/Primary School Akenzua Street, Benin City.

On June 11, 1989, in the company of her classmate Sr. Rowland, she left for further studies at Viterbo University in La Crosse, Wisconsin USA where she obtained a Bachelor of Science Degree In Personnel Management and Psychology on May 16, 1993.

Having witnessed her ardent dedication to the Lord and commitment to the Charism of the Congregation of the SSH of Jesus, she took her  Perpetual Profession of Vows on November 12, 1995  at St. Benedict Catholic Church Ubiaja, Edo State. On November 3, 2012, she celebrated her Silver Jubilee with her only surviving classmate in the Congregation, Sr. Monica Omowumi Rowland.