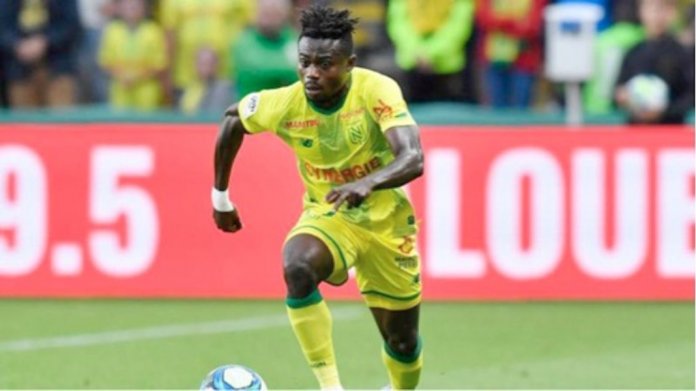 FC Nantes have made official Moses Simon permanent transfer from La Liga side UD Levante, but the French Ligue 1 side could still sell him on with offers pouring in from Spain, France and China.

Simon, 24, made the most of his loan spell at Nantes this past season in France, scoring nine goals.

He was also named the best player by the club.

However, the Super Eagles star may not feature for ‘The Canaries’ next season as they could go on to sell him for a huge profit after triggering off a clause to buy him for five million Euros on a four-year deal.

A top source close to the player told SCORENigeria: “He has signed a four-year deal, but Nantes could still go ahead and sell him.

“It’s like how Sporting Charleroi sold Victor Osimhen to Lille after they bought him from Wolfsburg following a successful loan spell in Belgium.

“Moses Simon has so far attracted interests from Spain, France and even China.

“We just have to wait and see.”

Meanwhile, Moses Simon has promised to do more than what he achieved this past season in the French Ligue 1 after he completed his permanent transfer to FC Nantes.

“For next season, I hope to do better than last season,” Moses Simon announced.

“I am really happy to sign for FC Nantes because my effort last season did not go in vain.

“I am excited to be part of the team again because I enjoyed their co-operation.

“I appreciate the entire team and management. We will keep working hard to achieve our goal.”

He has some parting words for his former club.

“I leave with some good memories from Levante, like the matches against Real Madrid and Barcelona,” he said.

“I wish the club and the fans the best for the future.”