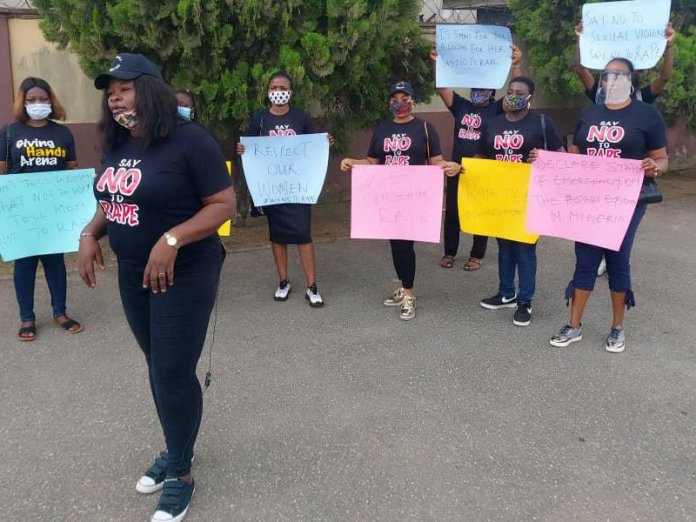 As part of efforts in tackling gender inequality, Honeybols Foundation has urged the Nigeria government to pay more attention against sexual violence.

The foundation over the weekend held a peaceful campaign against rape and child molestation.

According to the convener, Honeybols Foundation, Mrs Adebimpe  Akinfolajimi, stated that in view of global outcry, particularly the Nigeria experience of rape being a cankerworm that has eaten deep into the minds of it’s perpetrators.

“We want to seized this opportunity to urge the government to declare State of emergency on gender base sexual violence so as to put a stop to this menace.

“So, we are using this campaign to say no to rape and also to enlighten parents on the needs to monitor their girl child and also to instill discipline on their male child

“We’re doing this to complement what the government is doing and also to educate the few ones among the citizens on the need to stay away from crime because rape is a condemnable crime.” she noted

The campaign/walk was held in two different location started from Ogba-ikeja and matched to Abule egba axis to engage the passerby, tricycle and danfo drivers on the need why they should tell their children most especially male children and their neighbors on why rape is pandemic.

Meanwhile, Adebimpe has been honoured severally for her contribution to the welfare of the less privilege most especially widows and young women in Africa.

Mrs Adebimpe Adefolajimi is one of the proactive individual who gives back to the society wholeheartedly. The astute lawyer who is happily married with children. The foundation aim at promoting the welfare and economic empowerment of disadvantaged widows and education of their children. Since the outbreak of the Coronavirus popularly known as Covid-19 pandemic that has force residents to stay at home, the vibrant foundation has been donating foods and other items to safeguard the needy from contacting the virus.