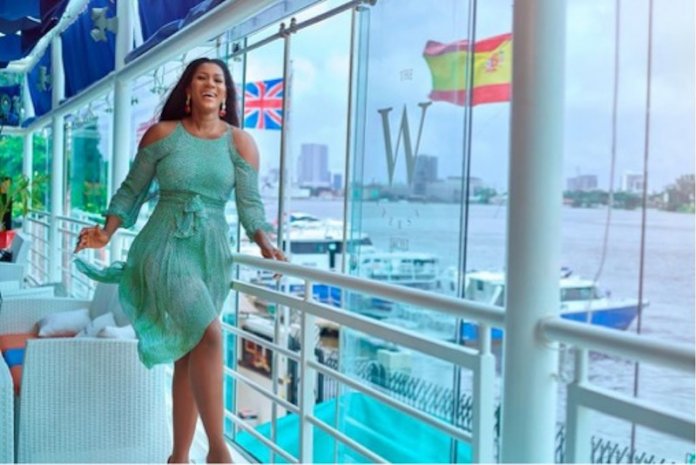 Like the rest of the world, the actress and filmmaker Stephanie Linus is adjusting to the new realities shaped by the coronavirus pandemic that upended the world. COVID-19 made its entry into Nigeria in February and has harvested lives and devastated families across the world. In Africa’s most populous country, at least 12,000 COVID-19 cases.

In strange times like this, Stephanie finds herself pondering on the fickleness of life.
“I’ve been thinking about the stark reality of how a virus can upend our world and how important it is for us to be compassionate towards one another. Surely, things are not going to be the same again,” she said.

These realities made her rethink how she communicates with others and made changes in other aspects of her life.
“I’ve made changes on how I communicate and how I think about my future. I’ve learned to be more empathetic and conscious of the importance of my actions, big or small. I’ve considered how I run my home and made necessary adjustments by surrounding myself with things that make me feel happier and healthier. I’ve also busied myself with activities such as reading, decluttering and refurbishing my space.”

No doubt, the pandemic is an eye-opener to some of the infrastructural deficiencies in the country. Some of these conundrums are very glaring as Stephanie pointed out.

She explained: “The pandemic has reawakened our minds to some realities we have ignored for so long; pertinent among these is the decay of our health care system. Nigerians have seen the need to speak up against the neglect of this particularly important structure in our society, a neglect that has persisted for several generations.

“The virus affects everyone – rich or poor, old or young – and without the luxury of traveling to countries with more advanced health care systems, we are now forced to look inwards and find urgent solutions. This pandemic has also made us see the huge impact our hygiene has on our overall health.
“As a nation, we need a tactical strategy to improve our healthcare system and hygienic habits and all hands must be on deck for us to see the change we desire.”

It is against this backdrop that Stephanie, who was appointed a Regional Goodwill Ambassador of the United Nations Population Fund (UNFPA) in 2017 recently launched a new campaign, ‘Hygiene First: My New Habit’.
Her mission is to awaken consciousness about personal and community hygiene in the country.

“I could name several habits we collectively practice that got me seriously thinking about this, but the most important thing that struck me is this: we’ve settled for less as a people. We don’t demand better because we don’t even know that we deserve better in our society,” she noted.

“We’re not paying attention to certain actions, which eventually become our habits and have huge consequences on our lives. There’s something fundamentally wrong with our thought process that needs to be fixed.
“We want people to pay better attention to the habits that affect our health and environment and make better choices. It starts with our behavior. We want everyone to know that the cleanliness of our environment is not someone else’s responsibility. It is our collective responsibility as Nigerians to put in the work and achieve clean and healthy communities that we’re all proud of.”

But with only 29 percent of Nigerians having access to improved sanitation according to a Water Sanitation and Hygiene sector annual National Outcome Routine Mapping (WASH-NORM) statistics in 2018, practising new hygiene habits can be almost untenable.

However, Stephanie revealed that the Hygiene First campaign is an all-encompassing one that is poised to educate citizens as well as collaborate with the government, NGOs, corporate organizations, and individuals.
She said further: “We intend to carry out major research to find out the infrastructural needs for proper sanitation within local communities and draw the attention of the authorities concerned to address those needs.

But while I understand these clear infrastructural deficiencies, the first step is actually a mindset change.
“If our consciousness is awakened as a people, we would find solutions to the problems staring at us in our faces. We can’t achieve change if we don’t even know we have a problem in the first place.”

The world of hygiene and environment is not entirely new to the former beauty pageant contestant. Several years ago, she earned a bachelor’s degree in Environmental Studies. She never imagined at the time that she will end up running a national campaign on hygiene and the environment.

Over the years, the actress whose fame in Nollywood can be traced to the 2000s when she scooped several awards for her intriguing roles in movies such as ‘Emotional Crack’, has acquired a new status: an advocate for gender-related issues.

Through her award-winning movie, ‘Dry’, that addressed the challenges of the adolescent girls in Africa but with more emphasis on Vesicovaginal Fistula (VVF) — a condition that allows the continuous involuntary discharge of urine into the vaginal vault as a result of a congenital birth condition — Stephanie has amplified the need for the society to pay attention to the African girl-child, spreading the message to every corner of the world.
Her efforts are not unnoticed. Last year, she was inducted into the Blacks in Cinema Hall of Fame in Los Angeles, and the movie has been screened in various film festivals.

The awards and recognition pale into insignificance compared with stories that have emerged from the film.
The 37-year-old mother and wife to media mogul, Linus Idahosa, considers the biggest achievement of the movie — which starred Olu Jacobs and Liz Benson — as the conversations it generated across the world and how it puts the spotlight on the African girl-child. More important, the 2015 movie has been instrumental in several significant policy changes such as the ban on child marriage in the Gambia.

“’Dry’ is the first world-class movie to address fistula and bring the world’s attention to a disease that has plagued women and girls for many decades. Its impact has been widely felt and it would continue to be a source of awareness and education,” Stephanie disclosed.

“It has put the spotlight on the need to improve our maternal health care system and ban harmful traditional practices that affect women and girls negatively. ‘Dry’ has also been translated into different languages to enable the message to reach people in rural communities, especially those who are most vulnerable.
“Our overall goal is to eradicate fistula in Africa and we are not relenting in our efforts. This is our passion, and we would continue to advocate for policies that protect girls and women.”

She added that her foundation, Extended Hand, has partnered several donor organizations to carry out free fistula repair surgeries on over 200 women in different communities across Nigeria such as Kebbi, Ibadan, Sokoto, Ilorin and Cross River. Presently, they are working towards building a world-class fistula hospital.
As COVID-19 continues to wreak havoc on lives and livelihoods, Stephanie who also produced the reality TV show, ‘Make Me Fabulous’, is worried about the fate of the girl-child.

She explained: “The pandemic is putting a big strain on healthcare systems across the world. This means that a lot of health conditions that are not regarded as ‘urgent’ are being relegated and many girls are skipping medical check-ups for fear of contracting the virus. Such actions could worsen their health.”
She expressed concerns over a United Nations’ report that predicted 13 million more child marriages could take place by 2030 due to COVID-19.

Stephanie added, “This is because families are more likely to marry off daughters to alleviate the perceived burden of caring for them, especially in the anticipated economic fallout of the pandemic.

“The UNFPA has also reported that the pandemic could cause significant delays in programs to end female genital mutilation which is a contributing factor for obstetric fistula. These are very valid concerns for the girl-child and it is even more important now than ever to speak up for them and keep their needs on the forefront.”

As a filmmaker, the alumnus of New York Film Academy is not oblivious to the adverse impact of COVID-19 on Nollywood. She opined that filmmakers have to think creatively about the kind of content audiences will relate to as well as rethink the distribution of their content leverage on technology to spread their stories across the world.

But more importantly, the graduate of English and Literary Studies emphasized the need for filmmakers to be more conscious about the health and safety of their production crew.

With no immediate end to the pandemic in sight, Stephanie is convinced that she needs to make more impact and change in the world, saying: “I’ve been thinking about the things that are in my power to change and what I can do about it. If my son asks me in the future what I did to make my country better, I want to be able to say that I did something.”