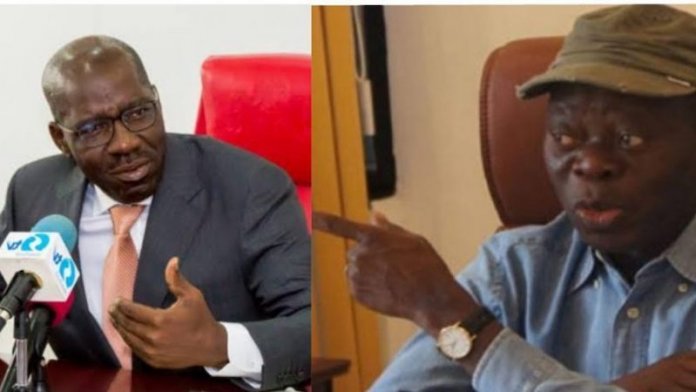 Latest developments in the supremacy between Governor Godwin Obaseki of Edo State and the National Chairman of APC, Adams Oshiomhole, suggest that the days ahead would be tough for both the party and the gladiators, writes Adibe Emenyonu

The fierce battle of who becomes the flag bearer of the All Progressives Congress (APC) took a dramatic turn Wednesday, May 27 as two major contenders in the party obtained their nomination forms.
They are the sitting governor, Mr. Godwin Obaseki; and Pastor Osagie Ize-Iyamu, who about six months ago, returned to the APC after a six-year sojourn to contest the 2016 governorship election, which he lost to Obaseki on the platform of the Peoples Democratic Party (PDP).

With this, Obaseki’s major challenger for the APC ticket is Pastor Ize-Iyamu, who was adopted as the consensus aspirant of the group loyal to Oshiomhole, who is locked in fiery political fight with him.
The Oshiomhole-Obaseki political war has created two factions of the APC in Edo State with the governor controlling a section while Oshiomhole has a grip of the other faction.

There might be parallel congresses at the end of the day following the guidelines roled out by the National Working Committee (NWC) of the party headed by Oshiomhole, which is being contested.
Obaseki, who controls a faction, had already expressed his reservation to the direct mode of primaries adopted by the NWC of ruling party in selecting its flag bearer for the 2020 governorship election in the state.

Although he said it doesn’t matter whether it is direct or indirect primary, ‘I will win, because I know what we have done in Edo State”. Similarly, his supporters have kicked against the direct method of primary election, following the return to the APC by Ize-Iyamu, which allegedly has unsettled the governor and his supporters.

Speaking on the growing acceptance of Ize-Iyamu in the party and his possible defection to the main opposition, PDP, for ticket, Obaseki said he is not disturbed in any way as “any contest would be no contest if it is not manipulated.” He also dismissed the adoption as a nullity, saying an APC candidate could not emerge in Abuja.

This is in addition to the waiver granted him by APC NWC, which is currently one of the bone of contentions the Obaseki-led faction have against Oshiomhole, that he is out to screw the primary in favour of Ize-Iyamu. Besides, his status as a bonafide member of the party is also in debate.
On Thursday, Chairmen of the APC in the 18 Local Government Areas of the state flayed the alleged endorsement of Ize-Iyamu as the consensus candidate of the APC in the forthcoming governorship election in the state.

The chairmen, in a statement, maintained that Ize-Iyamu was not a member of the party in the state, as he had left the APC in 2014 to contest the governorship election under the platform of the Peoples Democratic Party (PDP) in 2016, which he lost.
“We the Local Government Area Party Chairmen of All Progressives Congress (APC) in Edo State wish to inform the general public for the avoidance of doubt that the purported agreement to return Pastor Osagie Ize-Iyamu as a consensus candidate of APC in Edo State is totally false and without foundation.

“Pastor Osagie Ize-Iyamu is not a member of our Party. He led his followers out of the APC in 2014 and even contested the governorship election on the platform of Peoples Democratic Party (PDP) in 2016 election, which he lost.”

They also castigated the supposed waiver granted the former candidate of the PDP in the 2016 governorship election, noting that not only has he not met the conditions for such a waiver, but that whatever he procured was gotten from the wrong body, the National Working Committee (NWC), as it is the National Executive Committee (NEC) that is empowered by the party’s constitution to grant a waiver.

The 18 LGA chairmen, therefore, urged President Muhammadu Buhari to call Comrade Adams Oshiomhole to order, adding, “Article 21 of the constitution of our party tells us that factionalisation or creating parallel organs at any level within the party as Comrade Oshiomhole has done in Edo State is an offence against the party”.

They reaffirmed their support for Obaseki to continue in office for another term, noting, “We expect to actualise this support for the forth coming primary on the 22nd of June, 2020, using the Indirect Mode, in accordance with the resolution of the State Executive Committee duly passed on the 22nd of May 2020 as authorised by the National Executive Committee (NEC) of the party in August 2018.”

Re-echoing the Edo APC chairmen’s position, Publicity Secretary of Obaseki faction of the party, Pastor Joseph Osagiede in a telephone interview with THISDAY, said it was only the party’s NEC that was empowered to grant waiver, noting that Ize-Iyamu was not a member of the state APC. He added that as far as he is concerned, he only knew him as a co-sponsor of the Oshiomhole-led Edo People’s Movement (EPM), populated by factionional members of the party.

On the issue of mode of primary election, Osagiede said in the last NEC meeting of the party, a decision was taken that states should adopt the kind of primaries they want which according to him is binding on the NWC, adding that though they are not afraid of any form of primaries but only bordered about the logistics involved such as moving both party and INEC officials who will come to conduct and observe the election in each of the 192 wards especially in this period of COVID-19 pandemic.

In a counter, Washington Osifo, one of the elected lawmakers yet to be sworn in because of the crisis in the state assembly, which is one of the major instrument that cracked the Edo APC wall, said APC is a party that is governed by constitution of the party and not by conjectures.

The other method, he said is through online registration, which he explained does not require going through the rigours of the former, adding that the moment the online registration is authenticated, the applicant automatically becomes a member of the party with all the rights and privileges due to old members in line with its slogan of “we are equal joiners”.

Furthermore, he said Section 31 (2) of the party constitution clearly stated the right of the NWC to grant waivers to anyone who aspires to be a member of the party, noting that there is nowhere in the constitution of the party that says a new member must stay a period of time before waiver can be granted. Osifo said all the conjectures about waiver are coming up because a good percentage of members of the APC migrated from the PDP, and so, they still carry that mentality.

Still on waiver, he asked if Governor Obaseki was granted any waiver, saying that as at the time he was brought by Oshiomhole as the anointed candidate, the governor was not even a card carrying member of APC anywhere in the state, because it has never been an issue in the APC.

“Ize-Iyamu has been a member of the party for the past six months six and the moment he signified his intention to join and is accepted, he begins to enjoy all the rights and privileges to contest. Osagie Ize-Iyamu is a bonafide member of APC. You cannot refer to him as a former member, because anyone, who says he is not a member is not ready to vote”, Osifo declared.

Speaking on the mode of primaries, he said article 30 of APC Constitution clearly spelt out that direct primaries is the best in trying to enthrone candidates of the party, because it will not afford any leader(s) of the party to foist person(s) that majority of party members does not like.

He said what happened in Zamfara and Rivers State was because party leaders took the wrong decision in the selection of candidates without recourse to the provisions of the party constitution.
According to him, “Direct primaries cannot be manipulated. In indirect primary election, about 0.2 per cent of party membership will be the ones deciding the fate of others. In any case, in the 2018 party congresses, the party adopted direct primaries to select all those that emerged as candidates of the party in the state and national assembly elections. Second term is not by fiat but through negotiations.” Besides, he pointed out that right of first refusal is alien to APC and it is not in the constitution of the party. “You must submit yourself to primary election and if you win, so be it. It is wrong to foist a governorship candidate on the people,” he stated.

Osifo said in Edo south, which commands the highest voting population, seven out of the 10 constituencies are still being denied representation, pointing out that similarly in Edo north with the second highest voting population, six out of the eight members-elect are yet to be sworn, forgetting that there can never be a state without constituencies.
Publicity Secretary in the Oshiomhole-led faction, Mr. Chris Azebamwan said Article 13, Section 4, sub-section 14 is not misplaced, when it stated that it is members of the party that would go for primaries to elect candidate.

“These are the same people Governor Obaseki called renegades, and other unprintable words. So, how do you think they will turn around after all the insults and come to vote for him? That is why he is afraid of direct primaries. He said he is popular. So, let his popularity come to play,” he said.

As it stands, there is no denying the fact that the die is cast and that the battle over who emerges candidate of the party could be bloody going by the combative posturing of both factions, because should the primary not go in favour of either of the factions, the resort to parallel primaries or litigation will be the order of the day. Outcome of the June 22 primary election will therefore determine the next line of action.