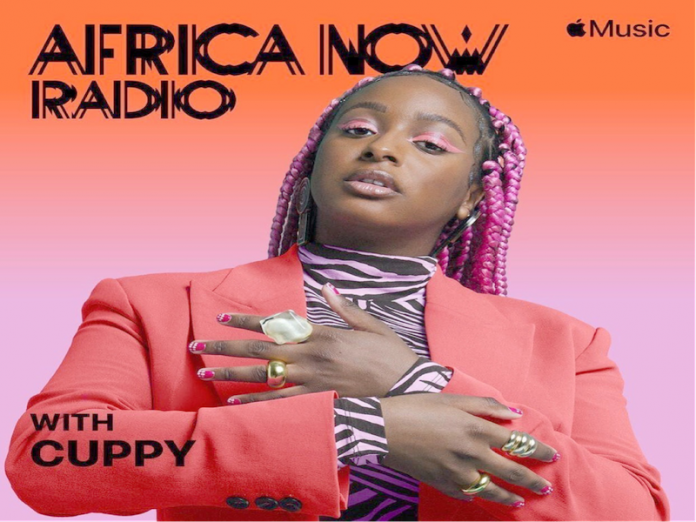 Brainy, beautiful and bold, DJ Cuppy keeps pushing boundaries. A gig with the world’s most valuable brand is the latest feather in her cap, writes Demola Ojo

Eclectic, innovative and driven, DJ Cuppy keeps re-inventing herself, making sure to be impactful and relevant. Her steady upward trajectory puts to bed preconceived notions, alters perceptions and inspires a generation.

Her latest achievement as a music show host for the world’s most valuable brand is evidence of – and reward for – years of persistence in treading an unconventional path, culminating in what she described as a “life-changing” contract and a “dream job.”

Today, Apple Music will be launching its first radio show in Africa tagged “Africa Now Radio with Cuppy”. Listeners will hear the greatest and latest African artistes, and new forms of African popular music, on the weekly show.
The global music platform with 60 million listeners from over 160 countries worldwide and over 30 countries in Africa, is the latest in a series of international brands associated with Cuppy, following a deal with Pepsi.

Born Florence Ifeoluwa Otedola, Cuppy’s dedication to her craft means she’ll now be the curator of the fast-rising Afrobeats genre for millions of Apple Music users.
The weekly show promises to feature a mix of contemporary and traditional African sounds, from classics like Fela and Majek Fashek, to current household names in the mould of Tiwa Savage, WIzkid, Davido and Burna Boy.

Speaking further on the one-hour show which would be available at 2 p.m. Nigerian time on Sundays, she said, “The show represents a journey from West to East and North to South, but importantly a narrative of Africa then to Africa now.”

In-between songs, she will be entertaining listeners through interviews with other famous African artistes.
She said: “I’m excited not only to play music but showcase the vast array of talented artistes cultivating the music scene on the continent.

“There are so many rich textures and sounds in Africa and the time is now for the world to embrace our diversity. Each and every week, I’ll be bringing a dynamic guide to discovering and celebrating the biggest and best sounds from across Africa, the Motherland.”

Passion and Persistence
For Cuppy, music is a passion that deserves full attention and commitment. The recognition and accolades are by-products of this desire to keep pushing and discovering herself.
Beneath the veneer of a happy-go-lucky girl who just wants to have fun, is a steely resolve to break boundaries and be an example of a young woman excelling in her chosen venture.

Being the daughter of a renowned industrialist and philanthropist could be a double-edged sword: on one hand is a first-row seat observing successful entrepreneurship, an opportunity to study the attributes and methods of a billionaire businessman, and learn valuable lessons.
On the other hand however, is dispelling the belief that things come easy, and having to work twice as hard, to prove that her place at the table is fully merited and deserved. This is more of a challenge in a male-dominated industry.

Teaching herself to DJ at 16 in London, Cuppy honed her craft while studying, and graduated with a degree in economics from King’s College London in 2014.
She burst onto the scene the same year, when she was selected as a DJ at the MTV Africa Music Awards in Durban. It proved to be the first of many highlights.
Her first compilation, House of Cuppy, featured remixes of Afrobeats hits. This was followed by House of Cuppy II in 2015.

Twenty-fifteen was the year she embarked on an African tour to promote her brand across eight countries.
The tour was filmed and a documentary series of the same name aired on Fox Africa.
Intent on gaining more knowledge in the business side of music, Cuppy earned a Masters Degree in Music Business from New York University, while also interning at Jay-Z’s Roc Nation.

The DJ has lent her voice to – and co-produced – a series of critically-acclaimed songs, from her debut “Green Light” with Tekno in 2017 to last year’s “Gelato” featuring Zlatan.
She also launched the London-based music management and content production business, Red Velvet Music Group, has hosted themed-parties across continents and is putting finishing touches to her highly-anticipated album, Original Copy.

Beyond Music
Cuppys excellence transcends music. She has followed in the footsteps of her father as a noteworthy philanthropist.
In July 2018, Cuppy launched the Cuppy Foundation. In November 2019, the foundation organized the Gold Gala in Abuja and raised over N5 bn to help displaced children across Nigeria for the Save the Children initiative, a non-profit that she is an ambassador for.

Also a Global Citizen ambassador, she was inducted into Forbes Magazine’s 30 under 30 Class of 2020.
In what has now become a trend, her new gig with Apple is, certainly, not the last of recognitions coming her way. Her father, billionaire business mogul Femi Otedola, is surely, proud of her achievements. This much he said in his reaction to the announcement by AppleMusic, on his Instagram account , “My angel @cuppymusic has made history as the FIRST ever African to have a show on @AppleMusic. Papa is so proud! … F.Ote”.