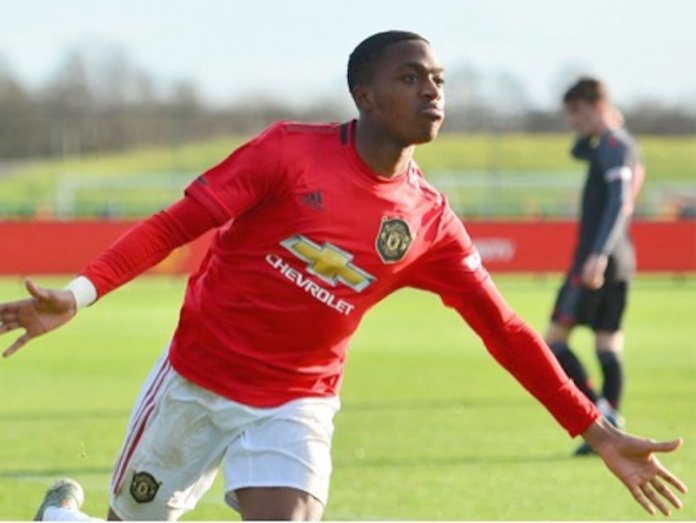 Manchester United’s academy is world-renowned for its quality. Over the course of history, the likes of David Beckham, Paul Scholes, and Ryan Giggs have come through their youth system, while more recent notable alumni include Marcus Rashford, Paul Pogba, and Mason Greenwood. Like always, there are many promising talents currently working their way through the ranks, with players like James Garner and Hannibal Mejbri seemingly on the verge of a first-team breakthrough. Ayodeji Sotona is another who is showing abundant potential, and one who could become special in the not-too-distant future.

Sotona has shown his exceptional ability and good form this season. The attacker has four goals and two assists from six starts in the U18 Premier League, showing his worth to the side.
Furthermore, he has been an outlet when played down the left, and equally useful when deployed in a more central role.

The 17-year-old has demonstrated his talent running down the wing, and making beautiful crosses into the centre, putting himself on the scene as one of United’s most encouraging players.
Adoyeji Sotona is officially the fastest player within the club.

As the Daily Mail reported, United held sprint speed timings at Carrington in September. Just 16 at the time, he stepped up to the plate, outpacing everyone in the academy and first-team, overtaking players such as Daniel James, Rashford, and Diogo Dalot. This has shown in his gameplay too. Being electric down the wing, combined with his dribbling ability, makes for a menacing player.
The Irish born attacker, who is also eligible for both Nigeria and England, is developing diversity across the front-line.

Having started the season as a left-winger, the 17-year-old is now playing comfortably at centre-forward, thanks to an injury to Dillon Hoogewerf, who recently signed his first professional contract.

Sotona has been as excellent as ever since the change in positions. He registered a brace in their most recent game, a 3-2 win over Everton U18s.

He could now be in consideration for a promotion to the U23s, and with Ole Gunnar Solskjaer’s liberal approach to giving youth a chance, you never know when he could even appear in the Manchester United first-team.

There is a glut of Nigeria-eligible starlets on the books of Premier League clubs, players who are very talented and willing to take risks for the betterment of their careers, and prominent amongst them is Sotona.

It is nigh impossible to count one too many youngsters at the Leigh Sports Village without naming the fleet-footed winger, having seen him maintain an incredible rise with the youth teams of the Red Devils and there could be more to come for him in the nearest future.

Sotona has been touted as the fastest player at Manchester United, clocking a staggering maximum speed of 22.9mph – more than 1.2mph ahead of second quickest Diogo Dalot in tests at United’s Carrington training complex last September.

Still aged only 17 and playing for the U-18s, to say he is talented enough for the U-23 side is trite even, as he has been tipped to break into the club’s reserve squad anytime soon based on his goalscoring prowess.

Blessed with an unwavering knack for getting into decent positions in the final third as well as a silky drive tailored to beat the keenest of markers, Sotona is a player very well suited to the modern game, which is precisely why he will benefit Nigeria’s national teams.

Though he was born in Ireland, the youngster is eligible for the Flying Eagles or the Olympic Eagles and is a player that deserves to be courted by the NFF, as he will add value to any of these youth teams he is added to.

First team gaffer Ole Gunnar Solskjaer has already witnessed first-hand the potentials of the lad, as he has been in attendance a couple of times to watch the sensation dazzle for the club in the FA Youth Cup.

It is important the NFF do not sleep on such talent, and should set the wheels in motion with respect to convincing him to pledge to the Nigerian course as Ireland will be waiting on the wings to do so.

The most intriguing part of Sotona’s game has been his recent transition into a centre-forward, having previously played as a winger.

He was pressed into this role after an injury to Dillon Hoogewerf and he led the line in the FA Youth Cup against Wigan.

Sotona stepped up, breaking free in the second half to go one on one with the goalkeeper and coolly slot home a late winner.

The way he stepped up was really encouraging and shows he has the temperament as well as the ability to become a success.

He also scored twice in a recent 3-2 away win at Everton and in five games as a striker he has three goals.