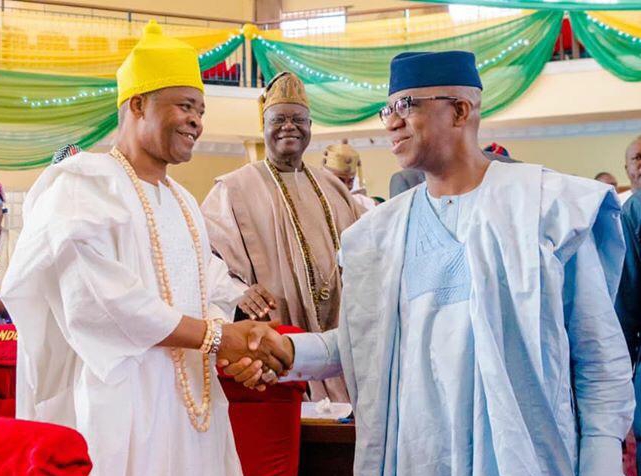 The Monarch stated it in a congratulatory message to the governor ahead of his 60th birthday coming up on May 29.

In a statement through his Special Adviser on Media, Yomi Gbadebo issued to Newsmen in Lagos on Thursday, Oba Alamo said the governor is the best thing that happened to Ogun in recent time.

‘’I wholeheartedly congratulate you on the auspicious occasions of your 60th birthday anniversary which again coincided with your 1st year in office as the Executive Governor of Ogun .

‘’Your came on board at a time Ogun needs a touch of corporate professionalism and superlative governance.

“You have shown unparalleled competence in the management of the scarce resource and we are grateful for your hands on many life transforming projects that has rekindled the hope of the common man.’’

” You have since changed the narrative as a true leader committed to the advancement of your people.

‘’I recollect with nostalgia, your heroic entry into the MKO Abiola stadium during your official inauguration as the 5th democratically elected Governor of Ogun.

” Your daring tendencies and resolute to lead your people at this period of our shared history speaks a lot about your background as a consummate businessman and an accomplished entrepreneur.

” As a Prince from Remo Kingdom, you have carried yourself with panache and style, the monarch said.

The Oba added that he had absolute conviction in the governor’s ability to lead Ogun to the promised land despite the state’s limited resources.

He pointed out that as the governor celebrated his diamond jubilee, he had joined the league of one of the finesse in the annals of the Gateway state.

‘’On behalf of myself, my darling wife and the good people of Itori-Ewekoro land, I join millions in the world over to celebrate your exceptional feast of the attainment of the beautiful age of 60 and your meritorious accomplishment in your 365days in office,” the monarch added.