Former President Olusegun Obasanjo has called on former African Heads of State to rise up and defend the African Development Bank, saying that its governance should not be hijacked from Africa.

The US Treasury Secretary had called for an independent investigation following allegations that the President of the bank, Akinwunmi Adesina, allegedly violated Code of Ethics, which Adesina had strongly denied as fabrications and misinformation to disparage and discredit him.

The former President said that the United States Treasury Secretary disparaged the Bank and ridiculed the entire governance system of the Bank, which has been in place since l964.

He pointed out that there was need to speak against the introduction of alien practices being recommended by some parties given that such recommendation falls outside the laid down procedure, laws, rules and regulations of the Bank.

Obasanjo added: “I therefore propose that we all collectively issue a press statement to support the laid down procedures embarked upon to evaluate the allegations against the President of the Bank and to recommend that the Board of Governors as well as the Ethics Committee of the Bank should firmly stand by their process and its outcome.

“We should speak against the introduction of alien practices being recommended by some parties given that such recommendation falls outside the laid down procedure, laws, rules and regulations of the Bank. It is also critical that we emphasize the need for the AfDB to remain an Africa focused development Bank rather than one which serves interests outside Africa.

“I have taken the liberty to order a draft of the proposed joint statement for your kind review, input and/or endorsement.”

The former President stressed that Adesina has performed well in this position over the past five years, and has taken the Bank to great heights.

He noted that in 2020, Adesina led the Bank to achieve a historic general capital increase, raising the capital of the Bank from $93 billion to $208 billion, an increase of $155 billion, the highest in the history of the Bank since its establishment in 1964.

Obasanjo said he had been made to understand that the Bank also successfully raised funds from donor countries of over $7 billion for the African Development Fund 15th replenishment for low-income countries, an increase of 35%.

He added that under his leadership the Bank launched the Africa Investment Forum (AIF) to mobilize massive flows of capital to Africa, while the inaugural launch of the AIF held in Johannesburg, South Africa, secured 38.7 Billion of investment interests within less than 72 hours.

He said that the Bank has been effectively positioned as an effective global institution, ranked 4th globally in terms of transparency among 45 multilateral and bilateral institutions by Publish What You Fund, an outfit that consists of 19 developed economies.

Obasanjo stressed further that Adesina led the Bank to successfully launch at the G7 Summit in Biarritz, France, the Ammative Finance Action for Women (AFAWA) to mobilize $3 billion for women businesses and entrepreneurs in Africa, with strong support and resources from G7 leaders and nations.

He said the Bank had also substantially aligned its financing and operations to help accelerate Agenda 2063 and the High 5 agenda of the Bank (Light Up and Power Africa; Feed Africa; lndustrialize Africa; Integrate Africa; and lmprove the Quality of Life of the People of Africa) are achieving good results.

Obasanjo said over the past four years, it is estimated that 15 million people were provided with access to electricity, through “Light Up and Power Africa”.

Obasanjo said in summary, in less than five years under Adesina’s leadership, the Bank‘s investments have benefitted and impacted a total of 333 million Africans.

He added: “You will agree with me that these achievements are commendable and the Bank has been placed in a strategic position to fast track Africa’s development. Finally, under Dr. Adesina’s leadership of the Bank, it has continued to maintain its Triple A (AAA) rating by all global rating agencies over the past five years.

“Despite these achievements and impressive leadership for the Bank and passion for Africa‘s faster paced development, and his clear endorsement by all of African countries for re-election for his second term, there are some attempts, led by some non-regional member countries of the Bank to frustrate his re-election. 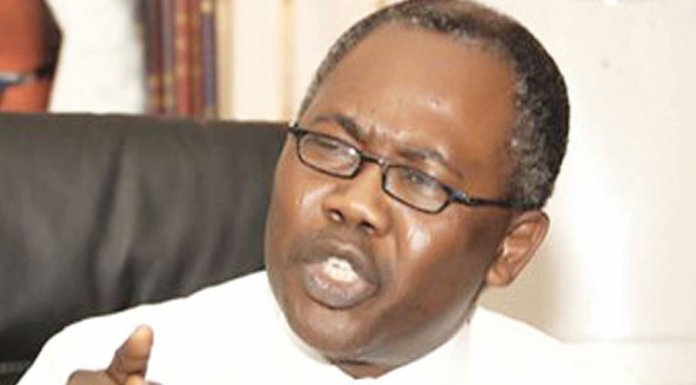 NECA Distances Self from Suspension of NSITF’s Management