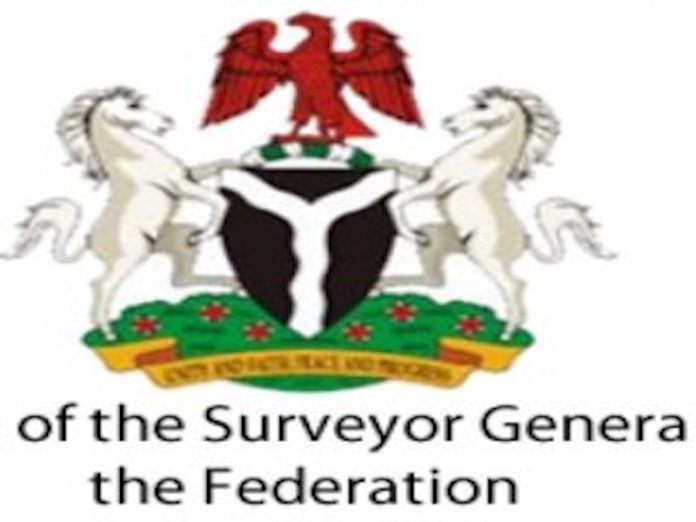 The surveyor-general’s office is at the fore of national development, writes Ofem Uket
The Office of the Surveyor-General of the Federation (OSGOF) has broken the restraint limiting it functions to surveying of land boundaries, erecting beacons and mapping of borders between states and countries by successive chief executives. In addition, its ongoing reforms and innovative strategies has played a major role in enlightening the people across the country of the deadly impact of the Covid-19 pandemic.

The mappings as produced and displayed daily by OSGOF are to ease production capacity of the statistical analyses by the Presidential Task Force (PTF) on Covid-19 and the Nigeria Centre for Disease Control (NCDC) as it creates robust synergy of inter-ministerial cooperation to address the prevailing health crisis.

Sectorial reforms to drive needed growth and national development are the major focus of the present administration since assumption of office in 2015. In spite of challenges confronting the administration, it has remained committed to ensuring that ongoing reforms in all sectors of the economy are sustained.

For the very first time in the history of the surveyor- general’s office since it was created as a national authority to survey, map and provide in the most cost-effective manner the geographic information of the country for sustainable national development, it has made progressions through it reforms to provide database of affected persons of corona virus through mapping in affected states.

It has created a soft landing as it produces maps for accurate and definite interpretation of number of infected persons in states for handlers of the Covid-19, especially as the maps are made available to majority of the Nigerian people who desire current and daily information on happenings and developments in the fight against the widespread pandemic.
OSGOF delineates, demarcates, surveys, maintains and administers all international and interstate boundaries of the country, produces geospatial products such as administrative maps, electronic national atlas, and gazettes geographical names, road maps, and other thematic maps.

However, the process of repositioning for relevance for sustainable growth and development came to the fore within the last seven or eight months of the present leadership. Indeed, it took off in October last year with vigour to create a new thinking and competence in surveying as well as link its responsibilities to national development.

The Surveyor-General of the Federation, Mr Taiwo Samuel Adeniran has demonstrated capacity to ensure the workability of sectorial reforms involving developing the nation’s infrastructure like roads, electricity, agriculture, water supply, health and education by providing geospatial information for the development of needed infrastructure.

He was appointed by President Muhammadu Buhari in January after acting for three months. Adeniran was also director of International Boundary and had served in different ministries, departments and agencies of government, manning offices and units that were responsible for surveying activities. He has also written several award-winning papers including “Disaster Risk Reduction and Management Using Geospatial Data.”

To further strengthen its resolve in the ongoing reforms, OSGOF is set to produce maps with geospatial needs for all the MDAs of the federal government for proper planning and execution of projects. This was contained in its interactive focus with high profile professionals in the industry, promising to create and expand the frontiers of surveying for the overall development of relevant sectors in governance.

OSGOF has said that the competence and high capacity delivery status of the Minister of Works and Housing, Babatunde Fashola on the map project is a demonstration of the fact that government is on the right track. According to the establishment, the minister has deeper insight into the importance of geospatial data and information for planning and implementation of government projects. The minister is said to be a great source of inspiration for the establishment.
From statistics made available by the institution, there would hardly be any meaningful implementation and execution of projects without geospatial data or information that would inform evidence-based decisions for proper planning before execution of projects.

That explains why geospatial maps for the MDAs would be of great value addition that would curb waste of scarce resources, especially at a time when the country is experiencing dwindling fortunes in revenue earnings. Therefore all MDAs are expected to make relevant briefings to the surveyor- general’s office with its geospatial needs based on its services and functions for the production of the maps.

Its commitment and drive are to produce world-class survey contents for the Nigerian government in order to speed up necessary development in the sector for enhanced capacity by collaborating with various professionals to achieve its mandates.

“We are committed to issues of surveying and mapping, that is because of the relevance and impact of the sector to national development. Therefore, there has to be compulsory surveying activities before the construction of government building and facilities; the public should as well ensure proper survey by experts before embarking on any construction project to avoid loss of lives and wastes of resources”, said the surveyor-general.

It has become very clear that the surveyor -general’s office which by previous headship was hardly known is gradually at the front burner of national development, and in fact determining a wide range of government businesses in all sectors of our national life.

Saraki and Quest for North-central Presidency