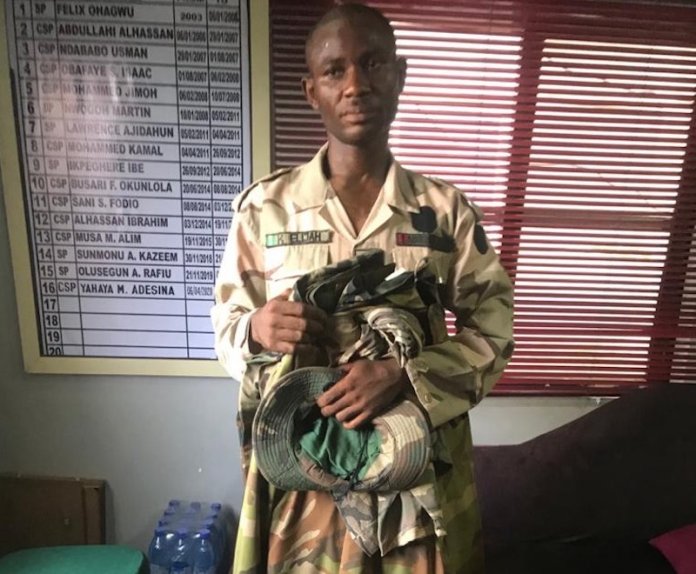 Onajide was gunned down around 9.30pm on Sunday, May 10, in front of the division in the presence of the Divisional Police Officer and the station officer.

Following an investigation into the death, the duo were arrested on Saturday evening and Sunday morning by a team led by the Divisional Police Officer (DPO), Yahaya Adesina, a Chief Superintendent (CSP).

Elijah, who admitted to have been dismissed for deserting the battle against insurgents in the North-east, was a frequent caller to the police station pretending to be a serving soldier.

The suspect, a resident of 16, Ibiyeye Street, Whitehouse Bus Stop, Okokomaiko, police sources said, fell into the radar because his motorcycle was impounded that day and later in the night, a Lexus Sports Utility Vehicle (SUV) carrying men dressed in military uniforms was spotted around the division shortly before the firing occurred.

Although he had visited the division several times in full military attire, he was eventually arrested Saturday evening when he was taken before the DPO who figured he was an impersonator.

He was said to have confessed during interrogation that he deserted the army with his firearm and other military accoutrements, including three military uniforms.

Similarly, in the course of investigation, Joseph, a resident of Imude Pako in Era Road, Ajamgbadi was trailed to his residence where three other impersonators allegedly fled and the police picked him, recovered three other army uniforms.

Police sources told THISDAY that the detectives were currently trailing six of such soldiers, each connected to each of the suspects to establish their roles in the cop’s murder or any other crime they have been into.

It was gathered that Onajide was about to enter the station and was holding some car keys in his hands when he was hit by the bullets fired several metres away.

Confirming the arrests, the state Police Spokesman, DSP Bala Elkana said the deceased sergeant was shot by some hoodlums, confirming that some suspects were already in custody.

“He was shot by some hoodlums. We have suspects in our custody with respect to that case and we are trailing others. Investigation is ongoing,” said Elkana.

When contacted, the General Officer Commanding (GOC) 81 Division, Major General Olu Irefin said the army will interface with the police in the matter.

He said: “Thanks for the update. I have ordered 9 Brigade Commander to interface with the police. The culprits will face the full wrath of the law.”