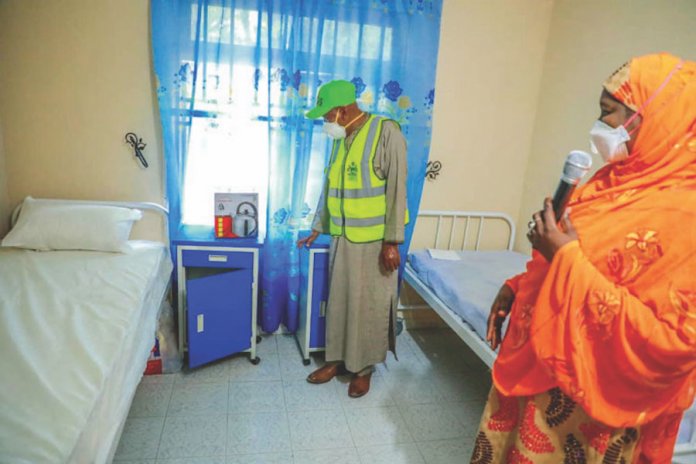 Lagos was the first city in Nigeria to report a case of COVID-19 on 27th February, 2020. Kano, the largest city in the North, reported its first case six weeks later, on 11th April, 2020. Across the country, states have enacted curfews and lockdowns to mitigate the spread of the novel coronavirus and to keep its citizens safe. Currently, the lockdown in Kano has had some good effects, but the economic constraints have had an adverse effect on the population, leading the government to acknowledge that a partial lifting will need to be considered.

The researchers said without strict adherence to social distancing, coronavirus cases in Kano would rise steeply. Therefore, should the state government deem it necessary, the following internationally recognised recommendations should be put in place.

I. Only partial mobility should be allowable.

II. Any person over the age of 10 and in a public space should be required to wear a facemask.

III. Employers should be required to provide face coverings for employees and government should provide the facemasks for citizens that cannot afford them.

IV. Restaurants and bars should be ordered to close dining areas but may maintain take-out, drive-thru, and pickup options.

V. Higher institutions should be conducting lectures online if possible. If unable to, no lecture room should have more than 40 occupants at a time.

VI. Faculties, departments, and other places in higher institutions should be required to place large hand sanitiser dispensers at every entrance and exits.

VII. Worship centres should remain closed until after the state has passed the peak of the wave, at which time places of worship could be reopened. However, even after attaining the peak, there is also a potential likelihood of another resurgence (second phase) of the virus.

As at Monday May 11, the official figures released by NCDC showed that Kano had recorded a total of 602 cases of coronavirus, out of which 526 are active cases. 50 persons have been discharged while the state has recorded 28 fatalities.

Lack of Testing – The Mystery Deaths

On the alleged mysterious deaths, It has yet to be determined if the number of deaths are in excess of the usual average.

While the exact number of deaths over the last few weeks is still in dispute, what is evident is the spike in fatalities. The response to the spike in number of deaths in Kano is interesting. Initially, the cases were dismissed as not COVID-19 related, and so were not added to any official reports. Later, the Federal Government’s Presidential Task Force on COVID-19 said some of the deaths were attributable to the pandemic based on preliminary investigation, only to backtrack a couple of days later with the claim that the deaths were still being studied.

At least two independent reports on the cases claim the pattern of the deaths reflects those of the global pandemic but with no sample testing after their deaths, they could only conclude on the need for more testing and suggest that community transmission within the city has already been occurring.

Northern state governors recently announced the prohibition of the almajiri system in the region. Following the prohibition, northern state governors have been dispersing the almajiris and repatriating those whose parents are from other states. This directly contravenes the ban on interstate travel put in place by the Presidential Task Force on COVID-19 as a safety measure against the transmission of the virus. Most of the Northern governors are engaged in this and the blame should not be dropped at the door steps of any particular governor. However, it’s high time the governors took a deeper look at the almajiri syndrome and abolish it while devising a concrete arrangement to secure the future of these hapless children.

Despite initiating a statewide lock down in early April it is widely accepted that the virus is now in the ‘community spread’ stage which is when someone gets the virus without having travelled out of state or made any known contact with a sick person.
The Head of the Presidential Task Force on Coronavirus in Kano State, Nasiru Gwarzo, disclosed during an interview with the BBC that the rate of community transmission in the state is ‘now 80 percent’.

More test centres have been created in Kano. In addition, a mobile testing lab donated by Aliko Dangote Foundation inaugurated on May 3rd at Muhammadu Buhari Hospital with a current testing capacity of around 300 but scaleable to 1,000 tests a day will support the government’s containment efforts.

As of Sunday, May 10, the Kano State Government confirmed that 47 medical workers tested positive for coronavirus in the state. The state has since taken steps to protect health workers and guard against the reoccurrence. This includes providing personal protective equipment (PPEs), hand wash, sanitisers, customised tap buckets, and further training.

The nature of the pandemic in Kano has now been clearly understood and the state government has aggressively scaled up its management to stabilise the situation. These endeavours will need full support from the Federal Government. In addition to social distancing, which will need trained security agents to enforce, Kano State Governor Abdullahi Ganduje has implemented the compulsory use of face masks in the state which will have to be supplied to those who cannot afford them. And only recently, the governor distributed over 2 million face masks across the 44 Local Government areas in the state.

There will also need to be regular disinfection of densely populated communities within the metro parts of the city, which has since been embarked upon.

However, these efforts will be negated if the masses are not fully educated on the pandemic, the responsibility everyone has in protecting themselves and others from the virus and steps to take if they suspect they have the infection.

Considering the low education and literacy level in the state, the first point of contact would be to engage with clerics and community elders and embark on a train the trainer program to sensitise people on safety guidelines.

Safety training of non-health essential workers such as cleaners, food handlers and security agents in health facilities has already begun in addition to the training of medical personnel.

The governor said the state had recruited 5,000 volunteer medical workers to tackle the pandemic.

“Kano State has the largest number of health workers with master’s in public health. So, Kano does not have a problem with manpower. Ours is just to reposition the manpower. This is what we are doing now,” DG NCDC stated, while assuring that they would leave the state with isolation centres that are manned by highly qualified hands.