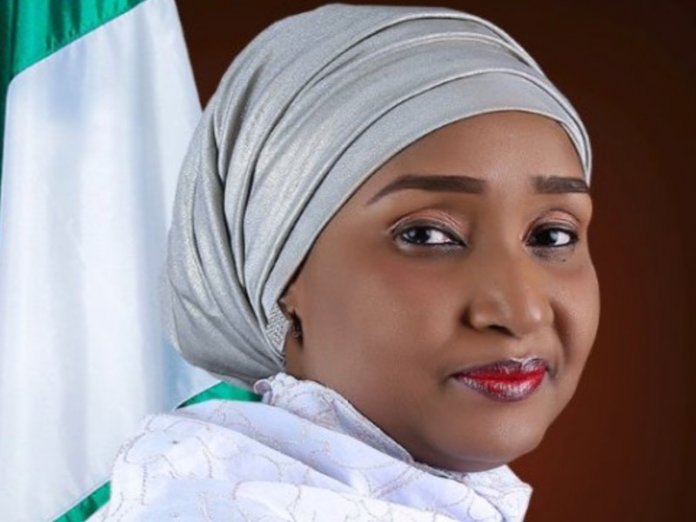 Minister of humanitarian affairs is focused despite distractions, writes Danliti Goga
Humanitarian Affairs Minister, Sa’adiya Umar Faruk’s emergence as a high-ranking member of the federal cabinet has thrown up a range of issues invariably related to her humility and focused commitment to duty and the hazards of public service. When she was named minister not many knew her as a tried and tested head of an important federal government agency- the National Refugees Commission- for several years where she had quietly but efficiently re-invigorated its operations. Little wonder that her appointment as minister triggered the usual wave of uninformed rabble-rousing and mischievous vendetta from the ever-present pack of disgruntled elements.

It’s now several months since she not only shunned the shenanigans but calmly and diligently focused on the arduous task of actualizing the establishment of one functional all-inclusive ministry integrating an array of uncoordinated agencies and departments of government charged with responsibilities for social welfare, disaster management and humanitarian affairs. It is a herculean job necessitated by the reformatory mission of the Buhari administration to synergize available government resources and capacity for a more robust management of the mounting challenge of humanitarian crises, natural and man-made disasters as well as delivery of social welfare service, all aggravated by the Boko Haram terrorist insurgency and related insecurity.

All concerned stakeholders in the process of a smooth and timely achievement of the consolidation of the multi-purpose mandate of the new ministry and seamless delivery of its important services to humanity cannot but marvel at Sa’adiya Faruk’s leadership acumen and organizational capabilities, not to mention her composure and administrative experience. Steadily she articulated the road map while also ensuring coordinated continuity in the various previously independent operations and even resolving pending problems.

Sa’adiya Faruk was still busy with her multi-tasking assignment when the dreadful Covid-19 pandemic got to Nigeria immediately escalating the already formidable burden of delivering succour and alleviating hardship among vulnerable communities. As expected, she took the new challenge in her strides, securing special provisions from the Presidency and marshalling additional palliative measures including expanding the capacity of existing social security schemes. Tirelessly the minister led numerous delivery missions to states in well publicised exercises that spotlighted the prompt response of the federal government through her ministry.

Sadly, such remarkable response ability and unwavering pre-occupation with the humanitarian and social security schedules as well as pursuing the progressive consolidation process toward the firm and functional establishment of the new ministry was rudely confronted by yet another orchestrated campaign of calumny, ostensibly complaining about inadequacy of palliatives but actually aimed at continuing with the sinister agenda of disparaging the reputation of the minister. It was a typical case of mischief propelled by political animosity and covert grudge.

Faruk’s calm and collected response was an additional testimony to the level of intelligent maturity she possesses. Those who picked on the social security schemes to get at the minister deliberately ignored the reality of intervention programmes that the minister was dutifully working to reinvigorate, reform and expand. Considering the population of poor and low -income citizens in the country, it can only be cheap blackmail to expect it to reach every impoverished household or citizen at this stage. It was very appropriate that the minister simply gave the floor to the particular official who was involved in launching the scheme and operating it prior to her appointment to set the records straight, while she refocused her attention on her national assignment.

The most misguided attempt to embarrass the minister regrettably but predictably came from the National Assembly whose supposedly honourable members raised so much dust over the “methodology” of compiling the list of beneficiaries of the social security programmes just to conceal their ulterior motive of seeking to be given an “allocation” of beneficiaries merely to advance their personal political agenda. They were as unpatriotic and selfishly motivated as the other pretentious wailers who went to town with unsubstantiated allegations of fraud in the distribution of Covid-19 palliatives whereas their grouse was not being appointed distributors so that they can help themselves!
These sickening scenarios describe the circumstances that discourage many capable and patriotic Nigerians from taking up opportunities to contribute their valuable quota in moving Nigeria forward through political offices. Notoriously referred to as “Nigerian factor”, these despicable attitudes of targeting upright and hardworking top government functionaries for mudslinging and unwarranted criticism solely for the purpose of bringing them down and creating undeserved vacancies for “godfathers” and cronies remains a major enemy of national progress and development that must be vigorously eliminated by any means necessary.

Until then however we must commend Sa’adiya Faruk for her unique capacity to remain undeterred and focused on her national assignment in the interest of the vulnerable citizens of this country whose population is increasing through no fault of theirs but who can only be assuaged and given a sense of belonging when dedicated and upright functionaries like Faruk accept invitations to serve humanity in government, not minding the heartless mischief and vested interests of politicians and their unscrupulous hirelings. Posterity and the millions of vulnerable and disadvantaged citizens that your dedication to national duty brings relief to will bear you out in the fullness of time.
Goga wrote from Kano