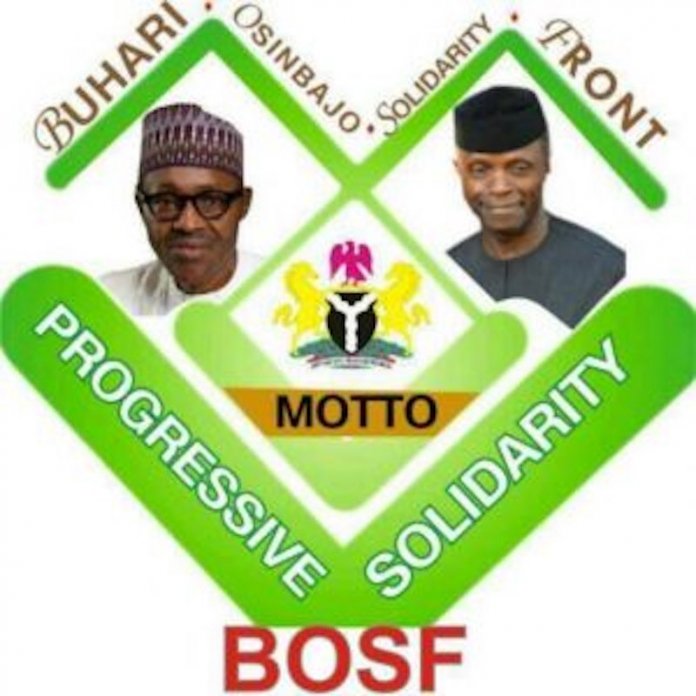 *Asks party’s spokesman to cure self of obsession with VP

A group of young Nigerians, Buhari Osinbajo Solidarity Front (BOSF), has described the Peoples Democratic Party’s attempt to resurrect a fake news and rehash unsubstantiated claims about a National Emergency Management Agency (NEMA) scandal as laughable and shameful, stressing that the party is out of touch with reality.

The group in a statement signed by its National Coordinator Olawale Badmus also observed that the PDP spokesman had simply become obsessed with Vice President Yemi Osinbajo’s name, and advised him to quickly seek treatment from such horrendous obsession.

The national group was reacting to a statement by the PDP urging Vice President Yemi Osinbajo to come clean on the so-called N5.8 billion NEMA scandal, a kite, which it said, they keep trying to fly but which has simply fallen short of resonance with Nigerians.

It would be recalled that in 2018, Senator Babafemi Ojudu, the Presidential Political Adviser, had rubbished similar claims made by the PDP.

“It is evident that the opposition are in search of company for their acts of grand corruption which brought Nigeria to its knees as of May 2015. They cannot find that company in the Vice President,” Ojodu had said while responding to press inquiries.

He added that: “first, there is nowhere in the politicized House of Reps report where the VP was accused of corruption or embezzlement of funds. I challenge them to quote any word or sentence that makes such an accusation.

“Even the House Committee Chairman has said there was no allegation of corruption against him. The only allegation is that he approved funds for the emergency operations in the North East from the consolidated Revenue Fund not budgeted funds. This conclusion we have proved to be false. The funds approved were from budgeted funds, specifically the Rice Levy.”

The BOSF said that not only had the Houses of Representatives and its Committee on Emergency and Disaster Preparedness led by its then chairman, Ali Isa, stated categorically that the Vice President, then Acting President, was not mentioned, it also said the Vice President was not fingered in the matter.

The group said the Committee on national television reiterated that the Vice President was not mentioned in its report and explained that the media reports at the time were figment of the imagination of those pushing the fake news.

“Nowhere in the House of Representatives report was there an allegation of corruption against the Vice President and this is why claims against him by the PDP are mere political tactic intended to malign him,” the group said in a statement on Tuesday.

The group noted that this was an old, rehashed and baseless allegation by the PDP which Nigerians should continue to pay no attention.

“Not a single claim of the PDP is factual. No indictment by the House at all. No fraud of any kind was perpetuated on the part of the Vice President.

“PDP thinks that if they repeat a lie for long enough a time, it will stick but not this one, because the issues are so well interrogated and well known to the public as a mere political stunt,” the group said.

BOSF explained that because President Buhari named a new director general for NEMA, the PDP saw it as an opportunity to reawaken its fishing expedition.

The group said this was proof that the PDP deserved pity and had lost every modicum of shame, adding that the party should, however, not be allowed to perpetuate lies or ventilate a fictitious agenda.

Commenting on the party spokesman, the BOSF noted that he was perhaps acting in the distorted view that his relevance was tied to disparaging the good name of Prof. Osinbajo.

“The PDP official these days have gone into oblivion and can’t find any issue to re-launch his jaded responsibility. So he is sticking to the name of the VP to keep hope of not losing his job alive. This is so shameless.”

The group said PDP as a party had failed generally, wasted public time as an opposition party, and should not be taken seriously.

“At a time when the world is uniting across party lines to fight the coronavirus pandemic, the PDP that has contributed nothing to curb the virus choose to unearth old fake news.

“This action speaks volume about the mentality of the political party and its leaders, and the party’s lack of sincerity or benevolent public spirit,” BOSF said.