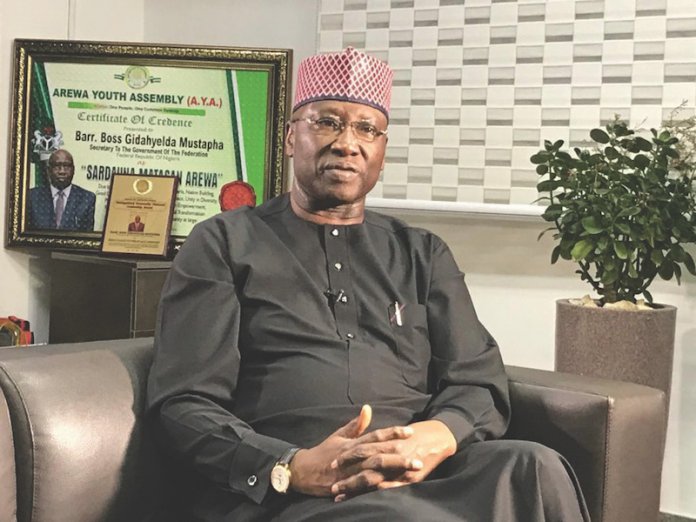 It is the proverbial dilemma, to be caught between a rock and a hard place. Boss Mustapha, chairman of the Presidential Task Force set up to combat the Covid-19 pandemic in Nigeria, is walking a tightrope, writes Demola Ojo

On March 9, President Muhammadu Buhari appointed a Presidential Task Force for the control of the Covid-19 disease in the country, a few days after Nigeria confirmed its index case. The inter-governmental committee was instituted in preparation for what the President described as “the unlikely but probable major outbreak of the disease in the country, which will require a multi-sectoral inter-governmental approach as advised by the World Health Organisation.”

Chaired by the Secretary to the Government of the Federation, Mr. Boss Mustapha, with a mandate to deliver on its assignment in six months, the PTF includes the Ministers of Health, Interior, Aviation, Humanitarian Affairs, Education and Environment; the Director-General of the Department of State Services, the Director-General of the Nigeria Centre for Disease Control, and the World Health Organisation Country Representative.

Mustapha’s choice as chairman by the President was fitting, considering his role as SGF, which is to ensure the effective coordination and monitoring of the implementation of government policies and programmes, with all cabinet matters going through him. If you ask him though, he would probably tell you how onerous his new assignment is, as we wade deep into the uncharted waters that this pandemic is.

A little under two months into the task set before the PTF, the confirmed cases of the COVID-19 disease has risen from the Italian index case to about 2000. Unfortunately, there have been some casualties, including the Chief of Staff to the President, the late Mallam Abba Kyari.

However, despite the countless challenges, the PTF has helped in staving off what – at a point – was projected to be an impending public health crisis. Based on the advice of the task force, Lagos State (the epicentre of the virus in Nigeria), Ogun State and the Federal Capital Territory were placed under a lockdown by the President.
This has helped in slowing down the spread of the virus, but with the adverse effect of significantly hampering economic activity. After a month of total lockdown, something had to give.

Lives and Livelihood
In his latest address to the nation on Monday, April 26, President Muhammadu Buhari announced the lifting of the lockdown in Lagos, Ogun and Abuja on May 4, and a subsequent nationwide curfew from 8pm to 6am for the following two weeks. In the tough trade-off between lives and livelihood, the President decided to walk the middle ground of a partial lockdown with a phased return to a semblance of normalcy.

Mustapha later elaborated on the federal government’s plan to restart the economy over the next six weeks in three tranches of two weeks each.

According to Mustapha, the PTF has designed sector-specific guidelines in line with the President’s directive. The strategy is designed to reduce the pains of socio-economic disruptions while strengthening the public health response, which would ultimately induce the recovery of the economy and provide succour to the poor and vulnerable.

In its most simplistic form, the decision to restrict movement was a choice between protecting lives or saving livelihoods. The initial decision to place Nigeria’s commercial and administrative capitals on lockdown was certainly the best at the time, as recommended by the WHO in the face of this novel virus and its unpredictable attributes.

The point of a lockdown is to localise an outbreak and stop it from spreading further. Failing this, the secondary reason is to slow the spread through community transmission while a more sustainable strategy is developed.

With the COVID-19 pandemic spreading to all countries of the world bar a few, and all states in Nigeria recording confirmed cases (apart from Cross River and Kogi), focus needs to shift to how best to live with the virus while reducing its effects until a cure or vaccine is discovered.

Beating the Virus
The importance of ramping up testing in the fight against the coronavirus can’t be overemphasised. It is inevitable that with increased testing, positive results will keep rising, at higher rates than present.

However, the more positive results (with a large number expected to be asymptomatic), the lower the mortality rate, and the easier it is to shift the narrative from fear and fear-mongering to recoveries, the famed resilience of Nigerians, and creative ideas to beat the invisible enemy by domesticating strategies that have worked in other climes, while also coming up with local and unique solutions.

Constant communication has to be the weapon – continually preaching a change in lifestyle by improving personal hygiene and protecting the vulnerable among us. Physical distancing and wearing of facemasks are to be the new normal. Facemasks have been a part of East Asian apparel for years, especially in China and Japan. The Lagos State Government is on to something by encouraging its citizens to bring their creativity to the fore and make fashion statements with their masks.

Just as important – if not more – is the campaign against stigmatisation. Stigma has held back those with symptoms from quickly seeking medical help, which results in infecting more people. Effectively communicating that in most cases – there is nothing to fear – is crucial. Early detection is fundamental to fighting off the virus.

Focus on Therapy
In the fight against COVID-19, hunkering down and hoping for a vaccine to be developed is not a strategy. Vaccines take time, and that is when they’re successfully developed. In the early days of HIV, a vaccine seemed just months away. Decades later, humanity is not closer to finding one. Also, the successful development of a COVID -19 vaccine, doesn’t necessarily mean it will be readily available.

In the meantime, focus needs to shift to effective therapies, while the search for a cure or vaccine continues. These include both local and international options to be considered based on merit and potential, rather than bias. Indigenous medical personnel and researchers need to be encouraged and incentivised in this quest.

Citizens need to be repeatedly educated on the need for individual and communal responsibility. It’s every man for himself, but also realising that any human institution is only as strong as its weakest link.

The health of your neighbour is just as important as yours; the virus does not discriminate based on class, gender, ethnicity or religion, neither does it play dice. Just like Mustapha and the PTF, everyone has to take responsibility and do the best they can in the circumstances.