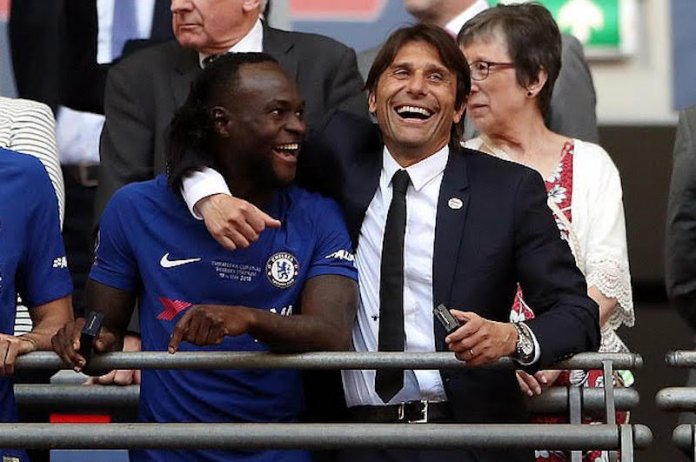 After several loan spells in his Chelsea career, it was the arrival of Antonio Conte that ensured that Victor Moses eventually dons the Stamford Bridge colours in a competitive game. It indeed came as a little surprise when the Italian signed Moses on loan on arrival at Inter Milan. After managing just one start in seven games and with the impending arrival of Barcelona defender, Nelson Semedo, the 2013 AFCON winner’s romance with the former Azzuri’s Manager may be nearing an end, writes Kunle Adewale

After several loan stints and when it was almost obvious he would never star for Chelsea in a competitive game again, the arrival of Antonio Conte as the Blues Manager changed the whole narratives for Victor Moses. The Italian saw what no previous Chelsea manager saw in the Nigerian and for the two years Conte was at the Bridge Moses was a regular figure.

All that changed with the arrival of Maurizio Sarri as the AFCON gold medalist was once again sent on loan to Turkey.

However, Conte in his Inter Milan’s revival mission still sees Moses as an important tool and he reunited with his old reliable, but all that may change with the exchange of players about to take place between Nerrazzurri and Barcelona.

The former Nigerian international is facing a contract extension hurdle at Inter Milan if reports emanating from the Italian media are anything to go by.

According to the electronic edition of La Gazzetta dello Sport, Inter Milan are ready to negotiate with Barcelona for Nelson Semedo and this is unconnected to Lautaro Martinez’s proposed move from the Nerazzurri to the Blaugrana.

If Semedo arrives Inter Milan, the Portugal right-back could replace Moses at the right wing-back role in the 3-5-2 formation usually favoured by Antonio Conte.

Inter have a purchase option set at 10 million Euros for the permanent signing of the former Crystal Palace and Wigan Athletic man but they are under no obligation to trigger the clause.

Since the former Africa Cup of Nations winner joined Inter in January, he has been playing second fiddle to Antonio Candreva, starting only one game in the Serie A, before suffering an injury.

Conte revived Moses’ career during his time as Chelsea coach by converting him to a right wing-back but since the Italian departed Stamford Bridge in July 2018, the Nigerian has been sent on loan to two different clubs.

The 29-year-old, who is Chelsea’s joint-longest serving player, is tied to the Blues until June 2021.

Moses has however, revealed he is ‘working hard every day’ to remain fit during the Coronavirus outbreak.

Moses has made seven appearances across all competitions since moving to the Italian club amid other dazzling displays, helping Conte’s men to third in the league table.

The versatile player will hope to continue from where he stopped when football activities resume in Italy.

Meanwhile, Manchester United defender Luke Shaw has named Moses as one of the toughest opponents he has played against.

Speaking to the official United website, Shaw said: “People always think I am joking, but one of my hardest games ever was against Victor Moses when I was coming in as a 17-year-old at Southampton.

“Maybe because I was so young. He was really quick, direct, and strong and that was a challenge for me.

“I’ve played against the likes of Gareth Bale, Lionel Messi and Eden Hazard, and they were all so good, but I always remember Victor Moses as a really tough opponent as well.”
Moses chalked up seven appearances in all competitions for Conte’s side prior to the Coronavirus suspension.

Moses joined on loan for the rest of the season with a view to making the deal permanent for £8.5million in the summer with an option of a permanent move.

The 29-year-old became the fourth Premier League player to move to the Serie A club this season, following Ashley Young, Romelu Lukaku and Alexis Sanchez’s transfers from Manchester United.

Moses, whose deal at Stamford Bridge is due to expire in June 2020, arrived at Chelsea in 2012 from Wigan Athletic and since then has enjoyed loan spells at Liverpool, Stoke City and West Ham.

In a telephone chat with THISDAY, former Nigerian international Paul Okoku said Moses reaped the hard work and effort at improving his game while on loan.

“It was not that Conte just woke up and decided on Moses. He had come to trust him during their time at Chelsea. Conte definitely had watched him play during his loan spell and knew he suits his style of play. Moreover, Moses too had put in so much effort to improve his game and that is what he is enjoying,” Okoku said then.

“I played as a wing-back a lot during my career, particularly when I was younger in the mid-to-late 1990s when that system was least popular in the Premier League. I used to enjoy it because, like Moses, it suited my game. Like him, I was more of an attacker than a defender and wing-backs have the freedom to get forward when they want.

“You have to be disciplined defensively and decide when to join the attack or hold back, but you have the freedom of the touchline and the ability to impose yourself on the game far more than you can as a normal winger. By timing your runs, you can come from deep with a head of steam and burst into great positions – the sort of thing that Moses does when he used his power and pace to great effect,” Conte said.

Moses has spent the past year on loan at Fenerbahce, after falling out of favour at Chelsea

He featured 34 times in the league that term, scoring three times.

Overall the pair worked together at Stamford Bridge for two seasons before Conte was sacked just two months after the end of the 2017-18 campaign. The last season saw them win the FA Cup too.

Moses first came to prominence at 14 after scoring 50 goals for Palace’s under-14s side. Playing for three years at both Whitgift and Palace, Moses scored over 100 goals as well as helping Whitgift win many School Cups, including a National Cup where he scored all five goals in the final against Healing School of Grimsby at the Walkers Stadium, Leicester.