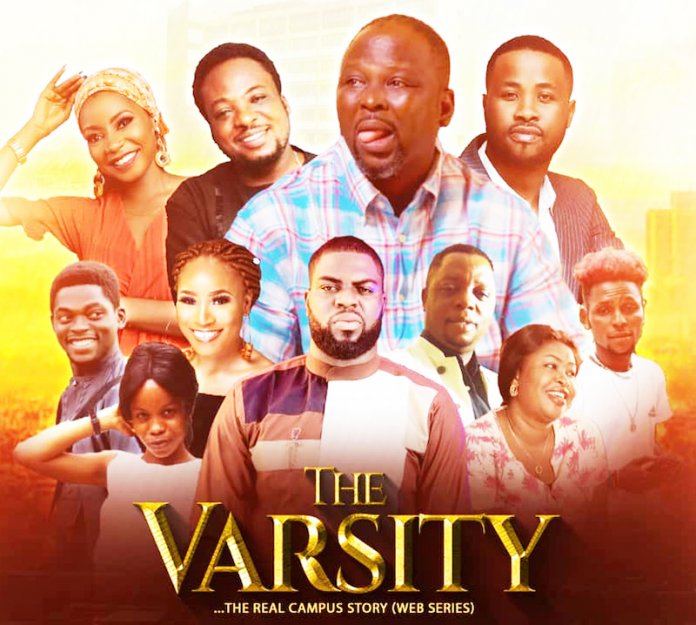 A teledrama set in a campus titled, ‘The Varsity,’ is revving up for online streaming on May 5. The production, conceived by Abiodun Olayiwola, a senior lecturer at the Department of Dramatic Arts, Obafemi Awolowo University, Ile-Ife was created to crystallize some theoretical canons of film and television productions. It is one production that unifies members of the academic community with professionals in the movie industry.

Powered by Magnum Entertainment Network, Ibadan and Ife Performance Circle, the project is necessitated by the urgent need to develop a culture of film and media production within the serene city of Ife that boasts of unique historical and natural ambience suitable for film productions. For some, Ife has been grossly underutilized by movie makers particularly from the academia. Past records of OAU, Ile Ife showed a rich cultural life that produced the likes of Ori Olokun theatre, as well as the Institute of Cultural Studies.

Produced and directed by Olayiwola, an award-winning film maker and lecturer, the teledrama focuses on the interesting occurrences in a fictional university setting; drawing heavily upon the enviable precept of the Obafemi Awolowo University in tackling anti-social vices that cannot be wished away in every human society. The visual narrative extols the importance of hard work, uprightness and the pursuit of dreams while condemning misdemeanors such as exam malpractices, cultism, internet fraud, premarital sex, sexual harassment and bribery and corruption. It beams light on the facets of staff-student relations in the university community.

The project offers students of the Department of Dramatic Arts, as well as those from all other departments a robust opportunity to hone their skills in various areas of film production. The idea, which is Olayiwola’s brainchild was translated into teledrama scripts by students, some of whom have now graduated but now constitute a part of the cast alongside some Awovarsity Theatre members. The written episodes were assembled into a piece by a post-graduate student of the department who also doubles as the Assistant Director of the project, Adetokunbo Shittu. The fifteen-episode teledrama will be broadcast on Youtube in May and other prominent cable channels later in the year.

The story features multiple plot strands showing students in various situations involving life-altering decisions. Tokunbo Coker (Ojuolape Kayode), is a spendthrift son of Professor Coker(Tunde Adeyemo), an erudite legal scholar. The Professor, excited about his son’s admission to study computer engineering, lavishes his son with money for his upkeep while he was out of the country. The young man however squanders the money on frivolities much to his father’s annoyance. Prof. Coker, in a bid to chastise Tokunbo his wayward son, decides to withdraw all financial supports from the boy for a period of six months. Desperate to keep up with the expensive lifestyle which he has adopted since getting the huge amount from his father, he jumps from one criminal gang to the other with the aid of his friends until he meets his waterloo in the hands of the school security and the Police.

Next is Funmi Lawson (Judith Bada), daughter of Barrister and Mrs. Lawson (Yemi Oyewo and Busayo Olayiwola). She is a girl with talent and passion for music whose parents insist that she pursues a career in law in order to inherit her father’s law firm. She meets Moses (Tolu Laloye), a 300-level music student who helps her hone her music skills. Funmi’s friendship with Moses however triggers bitter jealousy in Onome (Adesuwa Omoh), a cultist ex-girlfriend of Moses. Onome has vowed to ensure that, after her breakup with Moses, no other girl would be allowed to come near him. On a peaceful evening while Funmi is studying alone in her room, someone attacks her.

This brings a detective twist to the plot and necessitates the intervention of The Varsity’s student union and security apparatus.

Another important strand in the multi-plot world of ‘The Varsity’ is seen in the exploits and anguishes of Chidinma (Fadunsin Gbotemi), a lonely girl and her like, Silvia (Princess Obuseh). Though unrelated in the current season, the two share a common link in the use and abuse of their femininity.

Another sub-plot reveals Mr. Johnson (Taiwo Ibikunle) a lecturer who uses his positions to exploit students financially and sexually. This character is juxtaposed against Dr. Adeleke(Dolapo Adewale) and H.O.D. (Wale Adedeji), two incorruptible staff of The Varsity. The day of reckoning soon comes for Mr. Johnson, when Elizabeth his victim is caught cheating in the mid-semester test by the H.O.D. Further investigation reveals the lecturer’s illicit affairs with the girl and necessitates a strict sanction of the lecturer by the school’s disciplinary committee.

Costume and make-up for the film production was designed by the award-winning Toyin Ogundeji who is also a lecturer at the Department of Dramatic Arts, OAU Ile Ife.TT