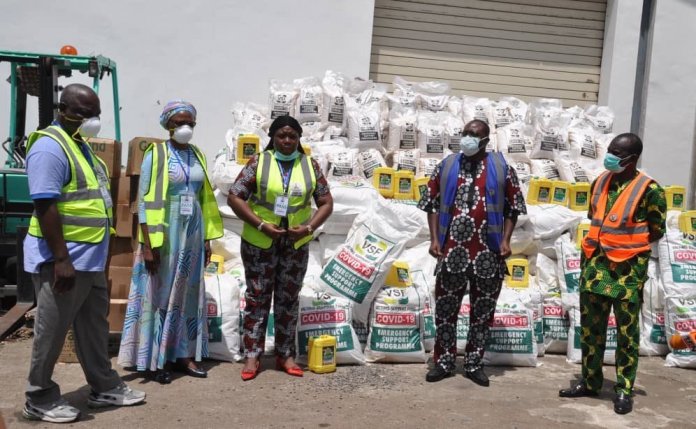 To cushion the effect of the lockdown as a result of the COVID-19 Pandemic, the Victims Support Fund (VSF) distributed palliatives to 30,000 indigent homes in Lagos.

The group handed over thousands of relief items to 10 non-governmental organisations (NGOs) for distribution to the urban poor.

Among the selected NGOs were Mama Money Foundation, Kokun Foundation, Lagos Food Bank, Rethink City Initiative and Impact Your World Leadership Initiatives, who were screened from a pool of about 90 and chosen based on their track record and credibility.

The relief items packed in 5,100 50kgs sacks each contained 10kg rice, beans, garri, with vegetable oil and salts, which were handed over to the NGOs with a mandate to ensure the target population received the items in the next few days.

The handover of the relief items to the selected NGOs at a warehouse at Sanya Bus Stop, along Oshodi-Apapa Expressway, was done by VSF COVID-19 Taskforce Chairperson, Toyosi Akerele-Ogunsiji, and her team.

She said they were instructed to send palliatives to Lagos following reports of unrest and hunger from those whose livelihoods had been affected as a result of the stay-home order.

She said: “Our work is basically in the North-east. This is our first time in Lagos and it is because the state is the epicenter of COVID-19 in Nigeria and we are here to support efforts if the Lagos State Government to effectively implement the lockdown order.

“We need to provide palliatives to poor families within the metropolis and rural communities to ensure people do not die.

“Beyond that, we do not want to see the brazen crime levels that have rented the air within the city in the past few weeks.

“So, VSF also targeted other frontline COVID-19 states and deployed resources to assist government and citizens there cope with the lockdown.

“We started with Abuja last week, where we donated to 4,910 households with each at least six family members, then moved to Borno where we gave out 6,137 households, with each households having seven members.

“We went to Yobe and donated to 3,828 households. From Yobe, we moved on to Adamawa and from there to Taraba, then to Ogun State and now Lagos.

“We at VSF have been increasingly worried about how we can provide a support for the state government to efficiently implement the lockdown order because we are concerned about the community transmission of coronavirus.

“If people are hungry, they will not stay at home, they will go out and it will be hard to flatten the curve. We are donating 5100 pieces each of 10kg rice, beans, garri, vegetable oil and salt and we are targeting 30,000 to 40,000 households across Lagos metropolis through 10 of our partner NGOs to reach the poor and vulnerable.

“Apart from the food items, we are donating personal protective equipment, N95 masks, surgical masks, gloves, alcohol-based hands sanitisers, soap, liquid disinfectant and investing a lot in advocacy campaigns around risk communication to ensure people do not take it for granted that coronavirus is real.”

On monitoring the delivery by the NGOs, Akerele-Ogunsiji said a monitoring and accountability process had been put in place which the NGOs must adhere to.

She said: “Because we do not have offices in Lagos and Ogun, we partnered NGOs with a track record of excellence in handling this kinds of projects.

“They have credibility and also experience with project reporting. Aside taking the responsibility, they are going to write projects and give public narrative of their experience in collaborating with the VSF.

“We went through a very rigorous exercise and selected from about 90 NGOs then trimmed to the 10 we are using. We also ensured we have good ethnic balance because Lagos is a multi-ethnic society and we do not want any ethnic group to feel marginalised.

“We also have an NGO to cater to persons with physical disabilities. These selected NGOs already work with these communities and they have database.

“We are aware that no single organisation can feed Lagos but if we judiciciuosly allocate the resources available and are sincere about the distribution, it will go a long way.”

Earlier, the VSF also handed over relief items to the Lagos State Government which were received by Commissioner for Agriculture Gbolahan Lawal.

In his remarks, the commissioner said the state government worked out its distribution from information received from databases, adding that 25,000 people were reached.

“We got 25,000 households through the LASRA database. From our data, 191,000 Lagosians are between the ages of 60 and above and we filtered the data and arrived at 25,000 people who responded to our text messages and they all got our food packages.

“We have also reached out to about 5,000 people living with disabilities in our seven clusters of visual impairment, physical disabilities, albinism, dwarfism, and other clusters across the state.

“We have also reached out to riverine communities starting from Irewe in Ojo, Ogun in Epe and 116 riverine communities with more than 5,000 households. We have selected groups, artisans, trade unions and others in the informal sectors and those who depend on daily wages through their leaders.

“We are glad that the VSF has responded to our call for support. Ordinarily they were meant to see after the IDPs in the northeast, we appreciate the chairman, the coordinator and the team for the gesture.”

Chaired by former Defence Minister and business magnet, General Theophilus Danjuma (Rtd., VSF prides itself as the first private sector-led humanitarian initiative in Nigeria with focus on the North-east region that has been ravaged by Boko Haram Terrorism.